I've had technical difficulties with my blog so there has been a delay in posting.  Hopefully the glitch it is sorted, but with computers one never knows!

Well it is to be - another Royal Wedding!  From now on the media will be relentlessly promoting it and trying to work us up into a frenzy of excitement. At the moment most people I have spoken to are rather luke warm about it but it is early days! 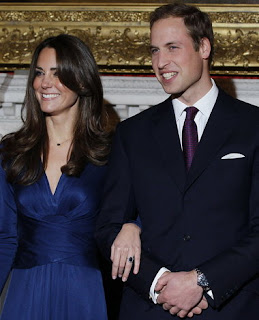 Inevitably thoughts go to the last Royal Wedding in 1981, when everyone celebrated the occasion and we all had a wonderful time. It's a different story now and any suggestion of making a Royal Wedding quilt has a negative reception. Everyone seems disillusioned, not only with the Royals, but with their own family divorces and separations and making samplers and quilts to celebrate weddings is no longer popular.  It's all rather sad.

I sincerely hope this marriage will work and I wish them every happiness.  Though when it was announced that the engagement ring was Princess Diana's,  my immediate re-action was ugh!  Some friends agree with me but others think it's a lovely gesture - strange how we think so differently?. 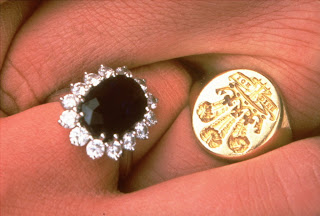 One of my first thoughts was that now I had better dig out the last Royal Wedding Quilt, which is waiting in the quilting queue and finish it!  Here it is in its un-quilted state - 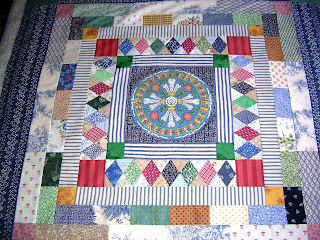 It is a long story.  Way back in March 1981 in the midst of Royal Wedding frenzy the Quilters' Guild had a  Museum Visit to Wales. Someone mentioned that it was a shame that commemorative panels were a thing of the past as we could then make a quilt to celebrate the wedding of the Prince and Princess of Wales, we all agreed. 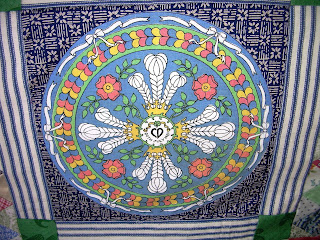 The next day Jenny Hutchinson, the Guild's President, produced a few panels that her brother had screen printed to make up as cushions.  I bought one, only later realising that I didn't have any suitable fabrics to use as the colours in the panel weren't my colours, so it was put away in my box of  precious pieces.

25 years later I decided that it was time to make the quilt - it had been a happy and momentous day that I for one enjoyed and by now I had plenty of fabric I could use, so why not?  Well  now I've moved it up to the top of the queue - watch this space!
Posted by Little Welsh Quilts and other traditions at 11:44:00

This American, who already plans to lay out of work on wedding day, thinks a Royal Wedding quilt is a lovely idea! I also think the sharing of the ring (from his father to his mother to his love) is a heart-felt gesture of sincerity. Though I admit, a fresh start looking toward the future could have started with a fabulous new gem. Bless them, they stand up to so much scrutiny. All the cameras and people yammering. I feel sorry for them in that case. Don't you?

What a lovely quilt and I love quilts as mementos. In Australia some of us are enjoying all the news of the forthcoming royal wedding and I for one will be watching the big event on TV just like I have all the previous royal weddings.

I to thought it a lovely gesture that William wanted to his mother to share in his joy. I don't think it matters that it was her ring after all if Prince Charles had really loved her the marriage would have survived and Princess Diana would still be with us- But fate always plays a hand . A quilt for them I am not sure they seem to be a very modern couple- perhaps a baby quilt would be more acceptable to them one day.
I do love your quilt you made which will probably becoming a real collectors item even though it was a failed marriage or because of it.

Are you going to hand quilt it? If you do can we see some of that? I love hand quilting and would love to see your work and how your brain works with choosing the quilting designs. I like the colors.

I believe in marriage so I was excited for them. The pictures say it all to me.

Hi Mary, Yes, it's hard not to get caught up in the excitement of a Royal Wedding, (even though in my head I know that what the Royal Family do or don't do will make no difference to my daily life at all) it's the spectacle and the pagaentry isn't it.
I think you're quilt is gorgeous and I'm glad you brought it out of the cupboard to work on and show us. That's a great panel, but yes sometimes we have to wait until the fabric trends catch up. It certainly looks very much at home surrounded by those borders.
til soon, Margaret

The quilt is beautiful, and I can't wait to see how you quilt it. What are you planning to do with it when it's done?

I just wanted to tell you that wedding quilts are alive and well! My friend Dusk, who is the one who originally got me quilting, was going through a fallow patch recently. I'd just bought your Making Welsh Quilts book and was really excited by it, so I sent her a copy. Next thing you knew, she'd made a beautiful and fairly huge Welsh quilt in soft grey tones for her sister's civil partnership - and finished it in time for the wedding too! You can see the quilt at http://elfbystarlight.livejournal.com/188043.html. Her new sister-in-law is Welsh, and the quilt was much appreciated.

I couldn't care less about the Royals, and I actually rather dislike the institution of marriage, but I still get gooey over weddings every time. I'm not sure about the engagement ring thing: it's quite traditional to keep them in families, isn't it? I suppose I think of it as, "It was his mother's," rather than, "It's a symbol of his parents' failed marriage." Now wedding dresses are different. I eventually had to tell my mother to stop hanging onto her first wedding dress for me (definitely not a successful marriage), as not only was it not remotely my style, but it would feel like bad luck!

As for me, I'm currently in the throes of binding a sofa quilt for a friend, then I am going to do Welsh quilting on a crazy log cabin I'm making for my cousin's new baby, which you can see at http://elettariaquilts.livejournal.com/9593.html if you're curious. I'm really looking forward to it. Traditional quilting patterns don't do much for me (I can spend quite a while going on about how I hate feathers!), but I took one look at Welsh quilting designs and fell madly in love. Once the baby quilt is done, I'm planning to make a Welsh sofa quilt for my parents, using more traditional Welsh piecing as well as Welsh quilting this time.

Hi elettaria! It does my heart good to read your comments. You have exactly the right approach to Welsh quilting it adds a layer of creativity that is quite unique. However, you need to plan differently when Welsh quilting patchwork as opposed to creating a wholecloth - I will be blogging about it in future posts.
I am not sure what will happen to the Royal Wedding quilt, maybe I will leave it to St. Fagans?

Oops, I must have phrased that badly. I've not been doing or planning Welsh wholecloth quilts, but at the moment I'm applying Welsh quilting patterns to non-Welsh patchwork. It took a while to figure out how to work around the business with sashed blocks, but once I got that sorted the design seemed to fit in nicely. I'm just at the stage of basting that quilt, so I will keep you posted! The next quilt I plan with Welsh quilting will have Welsh piecing as well (still trying to work out whether to scale up one of the patterns from your book, it's a sofa quilt, or whether to keep the same scale, use the pattern as a starting point, and add in extra borders), and after that I think I'll do a mix. I don't see any reason why Welsh quilting should be confined to Welsh piecing alone: the patterns work perfectly well with other types of piecing, and as I adore Welsh quilting patterns and don't really like traditional American quilting patterns, it makes sense for me. I am actually planning a wholecloth some time, but it's going to be inspired by http://www.daystyledesigns.com/365project.htm, only a hand-quilting version: I'll divide the quilt into sections and try out a new pattern in each. I will probably be doing some truly unholy blend of techniques in a few years.

I forgot to mention more wedding quilts I've seen: chuppot! A chuppah is a Jewish wedding canopy, you can see umpteen examples if you look in Google Image, and I've run into a few that were made as quilts and then used as wall hangings after the wedding. Some skipped the batting so that the light would shine through during the ceremony.