Thirty Years in the Making!

I am so excited!  I have just heard that my Charles and Diana Wedding Quilt has been accepted for The British Quilt Study Group Exhibition at the Quilt Museum in York.  The exhibition is entitled "It's All in the Making" and opens on the 6th September.  My quilt was chosen as there is a commemorative category! It certainly chimes with the exhibition title as it was 30 years in the making! 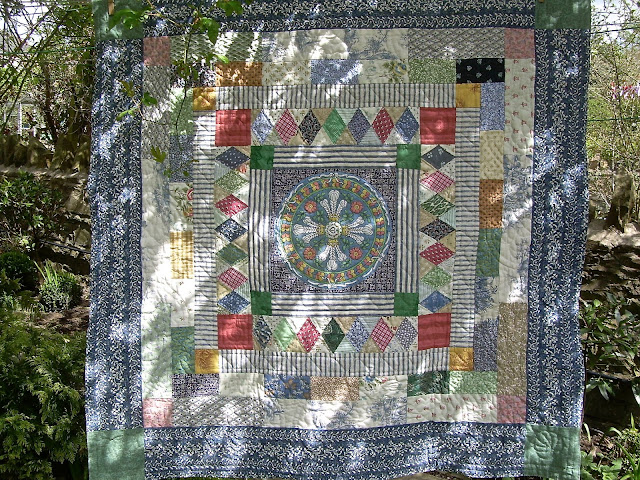 It was far too sunny for good pictures this morning, but I rather like the shadowy effect of the leaves! 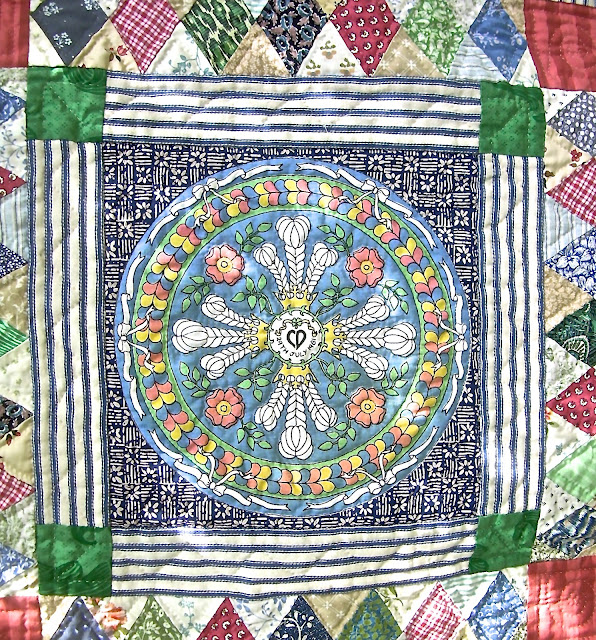 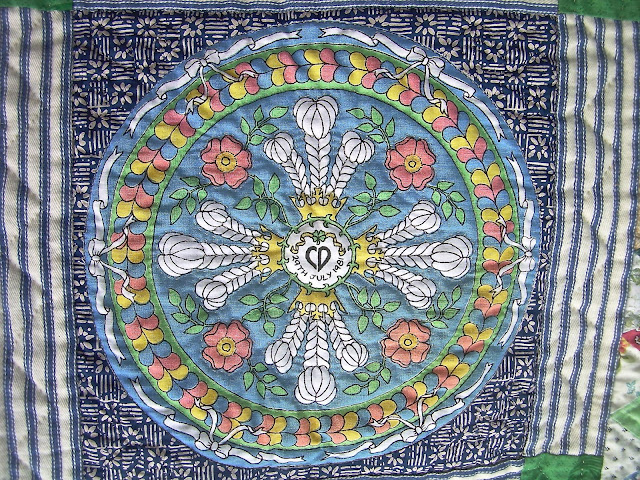 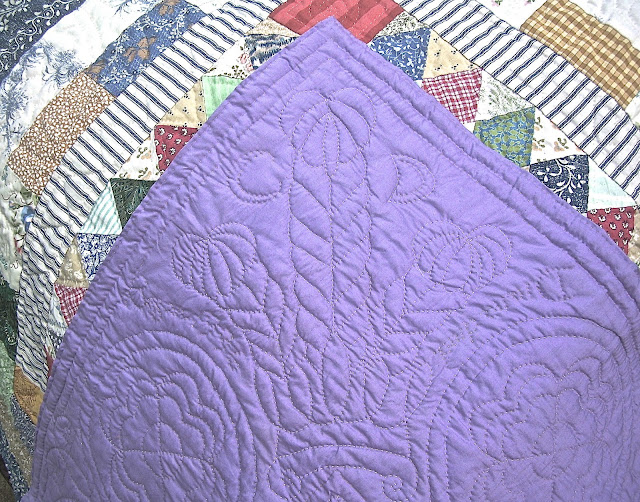 They were looking for quilts that had a story to tell and this one has a bit of a history!  Not only the span of years covered from start to finish, but what happened during that time.  Who could have foretold on that happy Wedding Day when we were all celebrating, that it would be divorce and death.  All so very sad!

Posted by Little Welsh Quilts and other traditions at 17:18:00 9 comments: Links to this post

Sometimes I want to write about a subject and I am at a loss to know which of my three blogs on which to post. Well here goes - LWQ has been chosen!

Because I am working on my Sundial tribute which is dated 1795, I am particularly interested in things and happenings around that time as I find it helps to keep me motivated. These samplers were all made when MCB  - the initials on the coverlet - was making it and it's interesting to speculate that had she had the time to sew a sampler, it might have been one like these?

I saw this sampler on the Metropolitan Museum of Art website and though I find this museum's website just as irritating to negotiate as any other museum, at least when you get there they do do good pictures! 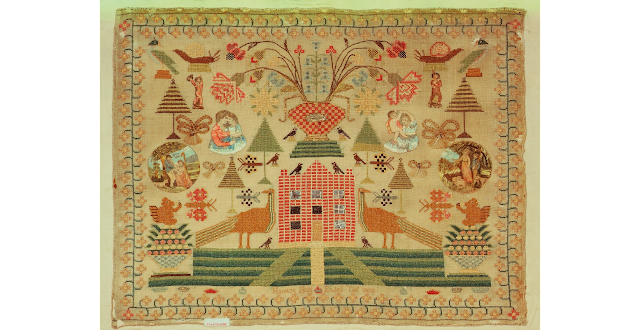 Though saying that I have had the most awful trouble trying to download one of a suitable scale! This is my fourth attempt and it isn't as good as I would like so here is the link for you to have a good look at it!  Do zoom in and examine it as it really is the most remarkable piece of needlework.  I marvel at the tiny scenes and the bows of plaited hair! It is English and made by Harriot Holt 1808 (funny spelling of first name) and the materials are quoted as silk, metal thread, paper, hair and mica on wool canvas. 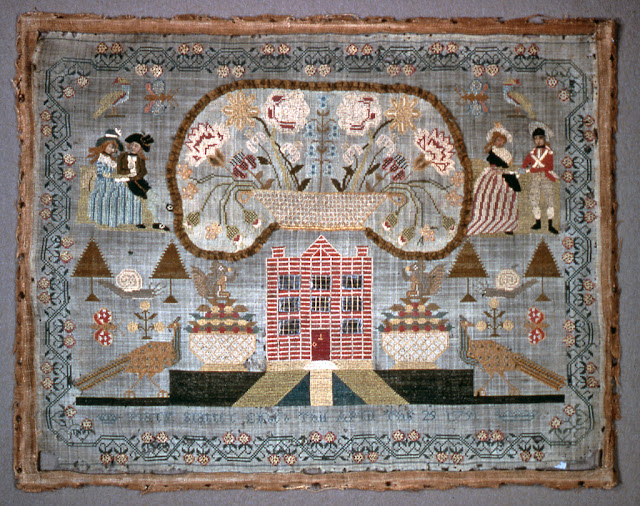 Lucky New York to have two of our stonkingly good samplers!

The one above  is by Mary Slatter who "ended this April the 29 1791."  The couples' faces are engravings which have been cut out and pasted in place. The windows of the house are mica couched in place. Quilled woven silk ribbon surrounds the bouquet of flowers.

Then there is this one also by Mary Slatter - 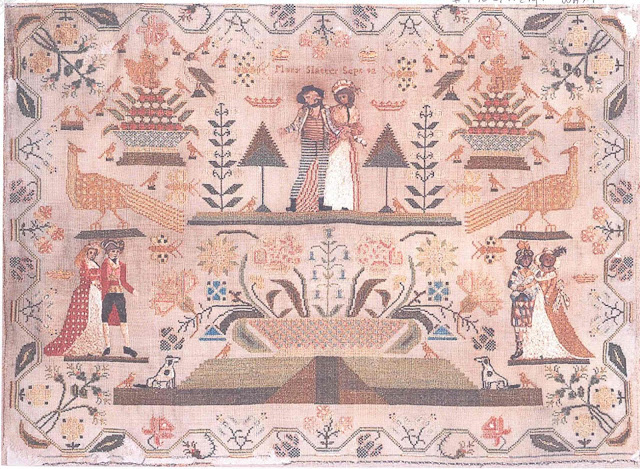 Sorry about the poor picture but this is one on the Worcester Art Museum website. Because I have seen a kit of it, brought to my attention by a comment on my blog, I had assumed that it was just a version of the other one dated 1791, but it rather looks that it was another done by a Mary Slatter a year later in 1792. This time she has omitted the house and concentrated on the figures and worked a more elaborate border!

Oh if only we knew more about these samplers!  I get so frustrated, not only because they are widely scattered without anyone recording their history, but I want to know who these girls were, where they lived and in which school they worked this design? The names Holt, Grubb and Slatter might be common in a certain part of England and it might be a clue.  If anyone out there could shed a light?

Posted by Little Welsh Quilts and other traditions at 09:19:00 5 comments: Links to this post

The floor at St. Paul's Cathedral.

I have just been watching the funeral of Margaret Thatcher on BBC1 and again marvelled at the beauty of St. Paul's - why haven't I been there? I used to go to London regularly but never spared the time to visit this wonderful building!  More fool me, but watching a television service there is the next best thing! 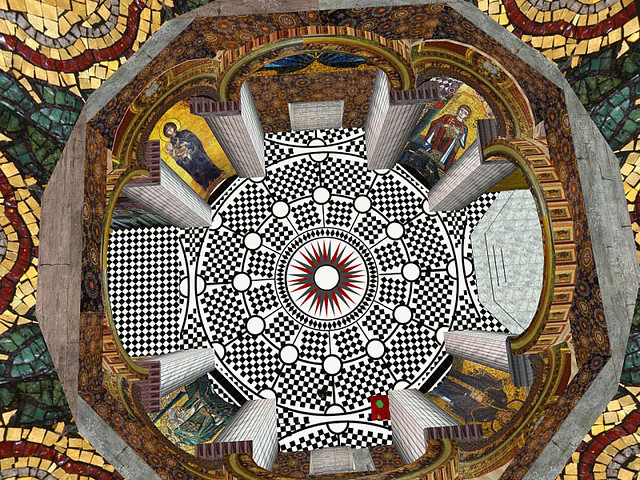 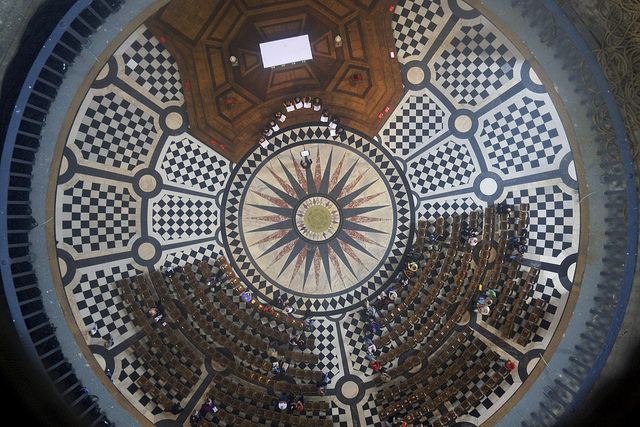 The first image looks computer generated and displays almost the whole wonder of the floor, but doesn't include (crucial for patchworkers) the centre with its diamond surround.   The second one taken from the dome, is how it really is, cluttered by necessary seats full of people, but you can just make out the central diamond border!

Mrs. Thatcher, as most of us still think of her, is a controversial figure here in the UK and many people were against the spending of 10 million pounds on her funeral.  However and whatever we think, it was magnificent and I for one enjoy every opportunity of seeing a big service in St. Paul's, be it a funeral, wedding or thanksgiving service.  The architecture, music and ritual is of the highest order and as I get older I seem to appreciate it more.

Margaret Hilda Thatcher went out in style, she died in the Ritz and had her funeral in St. Paul's.  Very fitting for our first woman Prime Minister - good on her!


Posted by Little Welsh Quilts and other traditions at 15:21:00 6 comments: Links to this post

Do you all watch "Escape to the Country"?  The popularity of this TV show seems to confirm that we all long for a dream home in the country.  Perhaps a cottage where we can indulge our country fantasy, something like this one - 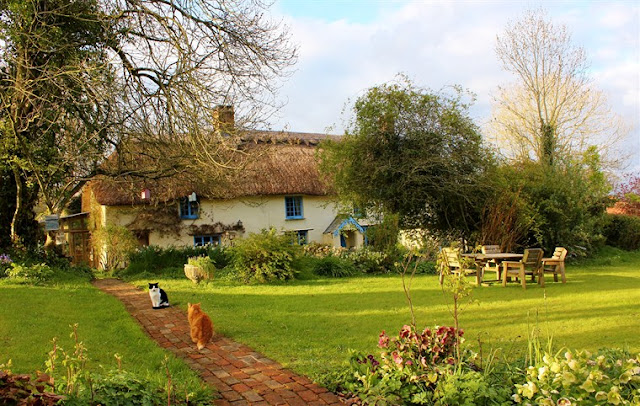 It was for sale recently.  It's a thatched Grade II listed farmhouse in Devon, believed to date back to medieval times and when I saw it my heart melted. I love Devon where I spent happy childhood years and this lovely house certainly has the dream ingredients - even two cats!

There is just one drawback!  Though in theory I love the country, I know that I am really a city girl. Though country life seems appealing, I know that I have to be near where it happens, even though I rarely participate in the happenings.  So maybe this little Georgian cottage in London is more me? 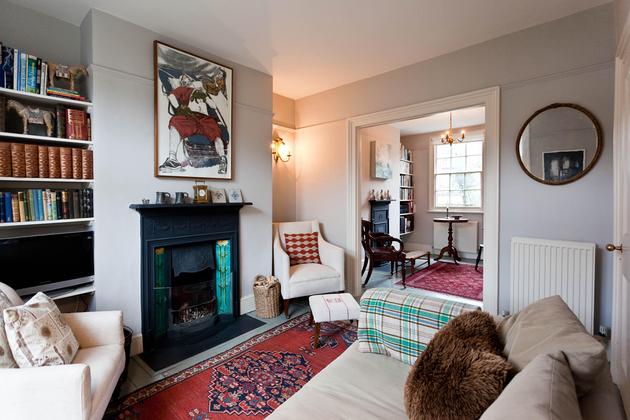 The city gives me a buzz and even better, if I wish, I could live in it for a little while!  Here is the link - go and explore!

Are you a city or country person?


Posted by Little Welsh Quilts and other traditions at 23:16:00 7 comments: Links to this post

There is quite a battle going on between pinners and those who don't know anything about Pinterest or who have decided not to participate.

As I may have mentioned I am in a closed EB group on Facebook and a discussion took place recently that got so out of hand that the administrators had to step in and close the discussion.  Quite a few people got terribly upset and a few threatened to leave the group!

All this came about because some members of the group weren't aware of Pinterest and thought that their pictures of china, dressers, animals and children clutching special pieces of pottery were private because the group was a closed one.

You actually can't pin straight from Facebook, they have put in technical barriers to prevent you doing it, but of course it is quite easy to get around, you simply save the picture to yourself and then upload it. This is certainly being done and is quite unethical.  However it is very difficult to police and equally difficult to trace the culprit.  So the only option is to be very aware and if you don't want your pictures copied don't put them on the internet, even in places that you think are semi private.


Because I am a pinner and enjoy the process I am more than willing to share my pictures.  In fact I am flattered than anyone wants to save them, but it also puts me in a position of defending Pinterest and my support of it!   It seems to me that many who don't pin take rather a self-righteous attitude and say that it is a waste of time and they have better things to do etc.  This annoys me.  We all have things we enjoy and make time to do.  There are lots of things I read about on blogs that my fellow bloggers do that I think are a waste of time but that is their choice.

I like to pin and I make time for it, usually at about 5.30am. when I wake.  Instead of just lying in bed listening to the radio waiting for the house to warm up so that I can leap into action, I pin!  So no time is wasted in my book and I hope some of you enjoy my boards?  I know I enjoy collecting the images and browsing through them and those of my fellow pinners!

Feel free to pin anything on this blog - blogging is all about sharing. Why else are we doing it?

Posted by Little Welsh Quilts and other traditions at 15:42:00 8 comments: Links to this post

Well it's official I am addicted to the iPad! This was brought home to me a couple of weeks ago when I suddenly lost my WiFi  and TV cable connection.  I didn't worry about the latter, as TV is rubbish at the moment and I can easily do without that, but my iPad is quite another matter.  Fortunately the situation didn't last long but it was painful while it lasted.

I was discussing this with my hygenist the other day and she agreed and said that her iPad was like her other right arm and I had to agree with her!

This is a dreadful situation!  How can we all have got like this so suddenly.  When I first had my iPad I wasn't that impressed with it and wondered what all the fuss was about, now I suffer iPad deprivation if something happens and I'm parted from it.  This is not a good situation! 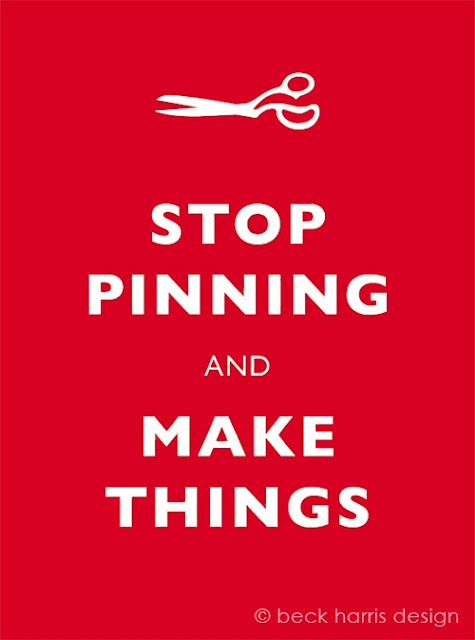 The above should be my new resolution because I am not making things!  Neither am I reading books or newspapers, unless they on my iPad. Magazines don't have the same appeal because absolutely nothing can beat Pinterest to satisfy a visual appetite. Pinning is my new hobby and it is taking over - I absolutely love it!

Do visit me on Pinterest (the button is at the top right hand side of this blog) and see what I mean about being addicted!


Posted by Little Welsh Quilts and other traditions at 18:23:00 7 comments: Links to this post