The new exhibition at the Jen Jones Quilt Centre

I do apologise for taking so long to post these pictures.  I am working against the clock on a project which I will tell you all about soon - it involves 17th century embroidery and I am having to cudgel my brains and revisit files and books that I haven't studied for ten years.

In the meantime here are some pictures of Jen's latest wonderful exhibition - these are just the start, I will post more and talk about them from time to time.  Just try and guess which are Amish and which are Welsh! 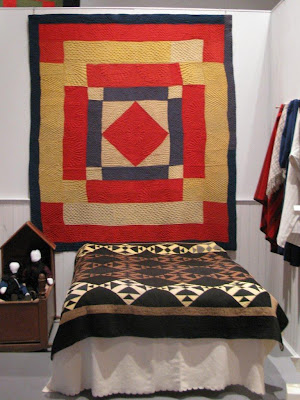 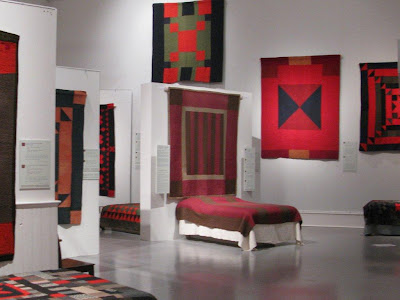 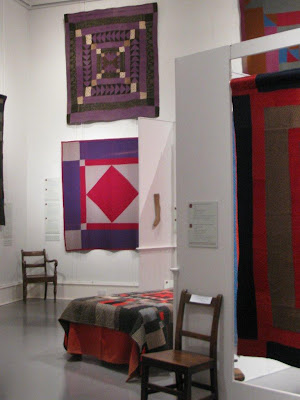 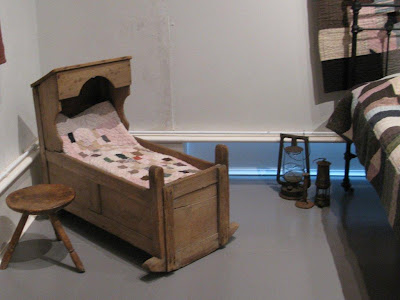 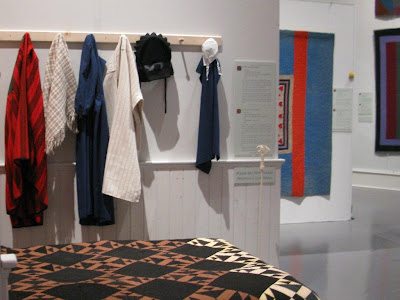 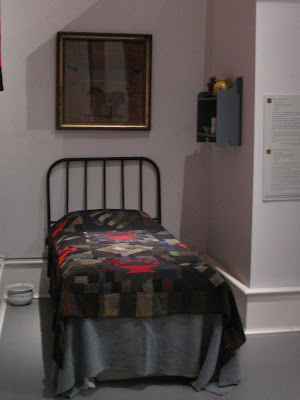 This last one shows a favourite of mine, the Ceredigion Red Basket Quilt (which we featured in Making Welsh Quilts) on a bed.  Check out the chamber pot - nice touch!

I am teaching at the Centre on the 13th and 14th April and there are places on the course - go to Jen's website if you are interested?

Posted by Little Welsh Quilts and other traditions at 11:17:00 No comments: Links to this post

Going to the Opening of Jen's Annual Exhibition at the Quilt Centre in Lampeter (see my last post) was an excuse to re discover some of the places I haven't  visited for a while which I will share with you in a future post. 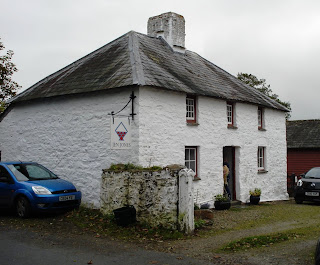 Not deliberately, but because we were talking so much we took a wrong turning!  Getting back on track, we took a road which led us past the Black Mountain which is the source of two great rivers of Wales, the Tawe and the Usk.

We could see both sources from the road, just two streams cascading over rocks on their long journey to Swansea and Newport - it was quite thrilling!  Then down into Llandovery and a lovely lunch of fish and chips at the Castle Hotel - the chips done in dripping, a taste from childhood and a very guilty pleasure! 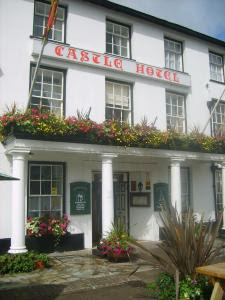 This old coaching inn has been looking a bit run down for a while, but I'm pleased to say that the HRH effect (The Prince of Wales has a farmhouse nearby) must be working as it was very welcoming with plenty of locals enjoying their lunch in this off peak tourist time.

I am gathering images of some of the quilts at the exhibition which I will share with you next time!

Posted by Little Welsh Quilts and other traditions at 12:11:00 3 comments: Links to this post

Email ThisBlogThis!Share to TwitterShare to FacebookShare to Pinterest
Labels: Journey to Lampeter

"A Quilted Bridge" - The new exhibition at the Jen Jones Quilt Centre.

This weekend a new exhibition is opening at The Jen Jones Quilt Centre in Lampeter. 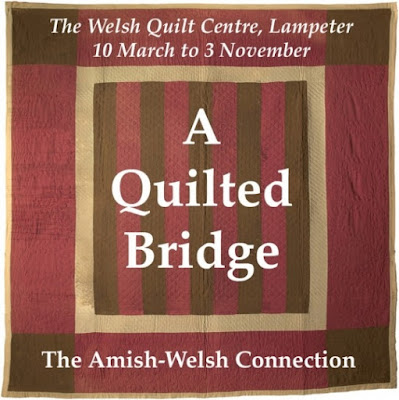 Welsh Quilts from Jen's Collection will be displayed together with a selection of Amish Quilts from the American Museum in Bath.  This will give us an opportunity to study their similarities and differences at first hand, all of which have been explored in a wonderful new book by Dorothy Osler. 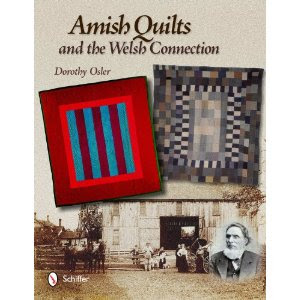 Dorothy herself will be opening the exhibition on Friday evening and I am off to Lampeter to enjoy the experience.  Every visit to Jen's shop and Quilt Centre is a treat and I will tell you all about it on my return.

Posted by Little Welsh Quilts and other traditions at 18:12:00 3 comments: Links to this post

Yesterday was St. David's Day here in Wales.  It isn't a public holiday, though many think it should be, however, the schools celebrate with special events and the children dress in national costume - my neighbour's four year old looked so sweet in her outfit!  The rest of us usually have a bunch of Daffodils and perhaps tea with Welsh Cakes!

I celebrated by digging out my Daffodil basket quilt which I began (according to the label) in 1981 and finished in 1984 and I thought I made quilts quicker then! 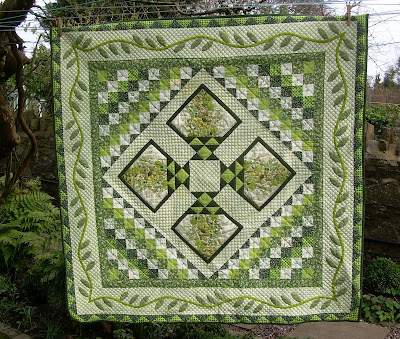 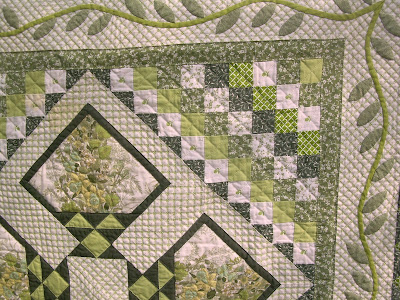 Practically all the fabrics are from Wales, mostly Laura Ashley but the Daffodil fabric from a factory that used to print near where I live - I actually picked it out of their free remnant box!

I was in my green phase and wasn't into Welsh quilting.  Now when I look at it I think I might do a bit before I put the quilt away again, there's certainly some scope within the baskets.  The rest is quite intensively quilted but without much imagination - it needs a stamp of Welshness!

This was made before the Trip Around the World quick technique was generally known here, so every piece was cut out and sewn separately.  But then, even if I had known about the quicker way, I doubt if I would have used it - I'm not into quick techniques!  It is my own design but heavily influenced by a quilt made by Joyce Blair on a cover of Quilters' Newsletter Magazine  - that used to be my bible!

We are having the most wonderful Spring weather here and this was the first time this year that I have been able to take pictures in the garden.  Sadly the forecasters are saying that rain is coming!

Oh - I have just heard that my Pansy quilt, which I showed on an earlier post, is going to be in the 2013 Quilters' Guild of the British Isles calendar!  That was also made in the eighties - so it's never too late for a bit of exposure!


Posted by Little Welsh Quilts and other traditions at 14:48:00 5 comments: Links to this post