One of the most inspiring places in New York for me was the Metropolitan Museum of Art and it definitely goes on my list of favourite museums.

When I wander a museum I like to choose an object that I would be willing to give house room too!  I found two at the Met., one was a portrait by Matisse which I would love to hang in my bedroom, the other was this little beauty - a Pew Group - 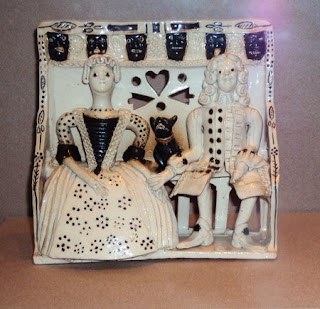 You will have gathered by now that I am a china buff and I love my Staffordshire pottery and though I had heard of pew groups I have never actually seen one.

Thank goodness Pauline managed to take this picture, because as usual, as is the way with museum shops everywhere, there is never a postcard of the item you like best!  The Met. does allow pictures and though I have deep reservations about that policy, I was grateful for it in this case, as now I can share it with you!

Pew groups were made in Staffordshire around 1740 and it is thought that they were made to order rather than as part of the normal pottery output and consequently are extremely rare.  They are made of white salt-glazed stoneware and measure approximately 7 x 8 inches.  They are usually of two or  three figures sitting on a settle, sometimes the men hold a musical instrument of some kind and maybe including a little dog.

In many ways they remind me of 17th century stumpwork as the figures are dressed in the costume of the time but of course these are almost a century later.  I think they are delightful and would love to own one but there is very little chance of that as the last one sold at Christies, New York in 2006 for -  wait for it  - 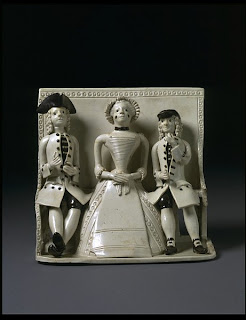 Oh and this is the Matisse - goodness knows what it is worth? 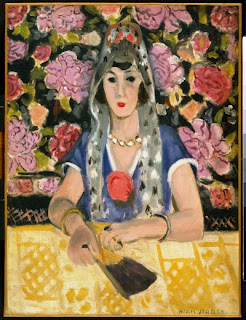 I don't think she is sitting in front of a patchwork quilt, but doesn't it look like it?
Posted by Little Welsh Quilts and other traditions at 09:32:00

Email ThisBlogThis!Share to TwitterShare to FacebookShare to Pinterest
Labels: Pew Groups and Matisse

I agree the pew groups and stumpwork do look similar - maybe you could make a stumpwork of yourself and your cats! With a Welsh quilt in the background!?? Just a thought! Lovely post anyway.

Those pew groups are so charming....love the button details in his coat, and the little dog looks like his paw in on the master's arm. How sweet!

And the Matisse is wonderful....such color and pattern!

I love going to the Met, but did not have time on this 'quilt' trip....I often have to tell everyone in the group that goes into the city with us...."Just leave me here, and come and get me at dinnertime.".....Art cannot be rushed!