I am just as keen on houses as I am textiles (and china and cats) and have a ongoing house selection game with one of my friends, where we choose which of the many beautiful houses in public ownership we would like to own. Usually we go for the smaller, more intimate ones, those that we could imagine living in if we had the wherewithal.  Well it's harmless enough?   I'm sure you have a "dream" house?

Our favourites do change and very often we favour the same one!  However, for me at least, Greenway House in South Devon is a contender!  I have fond memories of that part of Devon as I used to live in Totnes, but I didn't know then that Agatha lived nearby! 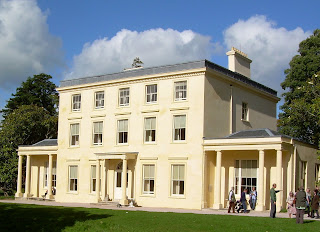 I used to read Agatha Christie novels avidly in my teens and when her country home opened to the public I was very keen to visit it.  It had always been pointed out on the river trips from Totnes to Dartmouth and had looked remote and inaccessible, so a chance to have a good nose around was too good to miss!

As you can see from the first picture, I visited it on a beautiful day (last October) which of course helped tremendously, but it a must have been wonderful living there whatever the weather.  Its setting is superb, looking down on the river Dart surrounded by an historic garden and grounds laid out (it is said) by Spanish prisoners of war in Elizabethan times. 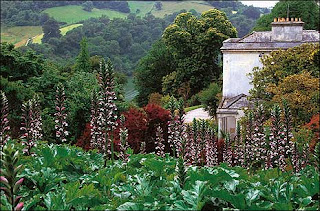 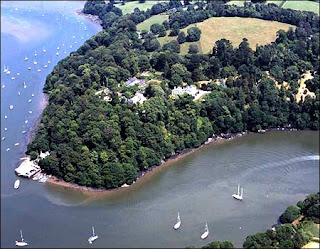 Mrs. Christie obviously loved the house as it has an atmosphere of comfort and calm.  All the family  collections are there, cupboards full of china, wardrobes filled with clothes (which the housekeeper will bring out for you to admire) and the hall filled with antique boxes, which I particularly liked because I house my much smaller box collection in my hall. 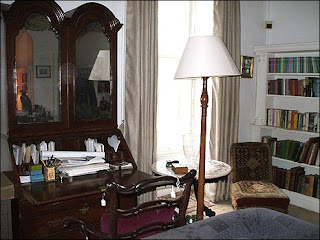 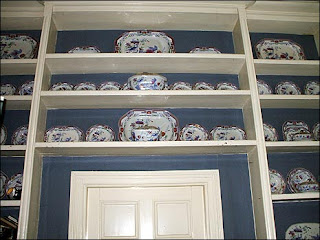 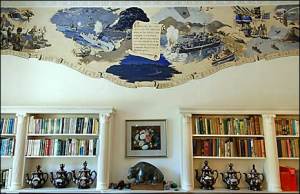 My favourite room was the library, lined, of course, with bookcases filled with all the editions of her books in many languages. It was furnished as an informal sitting room with comfortable sofas where one could dream of lounging - perhaps reading the morning papers?  Between the picture rail and cornice was a mural painted by an American artist who had been billeted there during the War when it had been requisitioned for the US Navy.  After the war, Mrs.Christie didn't want it painted over - she said it was part of the history of the house.

The National Trust who now own it have carried out the wishes of the family and have kept it just as it was when they lived there.  If you think you have clutter, this house will put your mind at ease, because boy did they collect stuff!

Here's a link that will take you to some videos that will give you a flavour - but put it on your visiting list!

http://www.torbayhospitality.com/agatha_christie_greenway.aspx
Posted by Little Welsh Quilts and other traditions at 09:23:00

Email ThisBlogThis!Share to TwitterShare to FacebookShare to Pinterest
Labels: Agatha Christie and Greenway

What a treat to get to visit her home. Someday I hope to as well, just beautiful. So much to look at! Oh to be able to sit in that library for a few hours and just think and poke around the books what a day that would be!
Kathie

Thanks so much for sharing this, Mary! I read Christie novels as a teen and young adult, too! I guess there are a lot of us who did. How fun it must have been to visit. WIth all the places you've told us about, I'll need a month to visit your part of the world! Some day:o)

Fabulous. I will put this home on my list of "must sees." Thank you for sharing your visit with us. Karmen

Oh, I would love to see her house in person, and appreciate your photos and links. Agatha Christie was the first mystery writer that I ever read, and still one of the best. Ah, the English Country House mystery - love em!

Thank you for sharing your visit with us. I hope to get there myself sometime this year:)