Welsh Dressers - but they needn't be Welsh!

I do believe the Jesuits were on to something when they said - "Give me the child for seven years and I will give you the man", because I realise now that my tastes and values were formed when I was very young.

I was living in a village in Pembrokeshire with my extended family nearby and being exposed to quilts, samplers, Scotch Plaid (as we in our ignorance called it then) and Paisley shawls and dressers filled with Staffordshire figures and jugs. It only lasted five years and maybe there is an element of rose tinted spectacles at work, but I am so grateful  for those happy years. 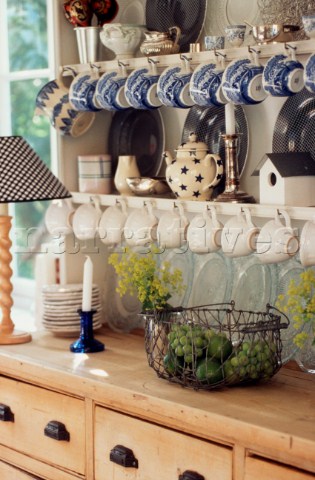 Now we come to the subject of this post - dressers and not necessarily Welsh ones as I don't really mind what nationality they are.  Every cottage in the village seemed to have one because this was pre fitted kitchen times. I can still see them - my Great Aunt had one with twenty six jugs hanging on it, which may explain my love of jugs?

To own a large and laden dresser has always been an ambition and I enjoy studying pictures of other peoples for inspiration. Look at this one which is filled wonderful EB pieces- 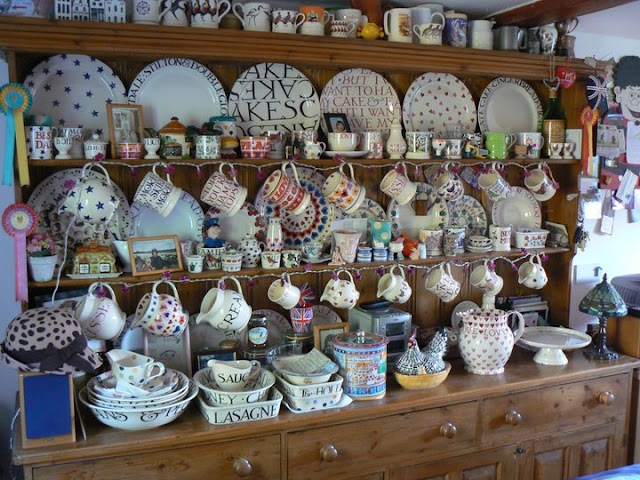 I just love the fact that though it is packed with beautiful and desirable objects, it's obviously a used and necessary part of the home, just as dressers should be.  I admire it greatly and thank the owner for allowing me to use her picture.

Art installations are the thing nowadays, but Tracy Emin can have her beds (there was one in the V&A Quilts Exhibition last year) I think that dressers are really an art form too and a useful one at that!  Just look at this one- 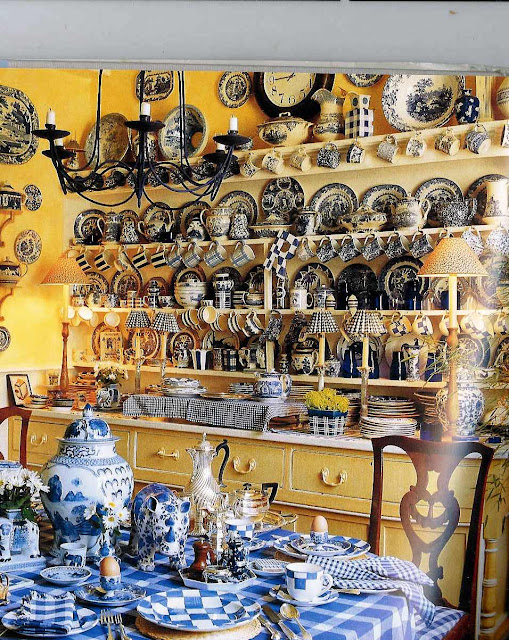 which belonged to the late Roger Banks-Pye who was the Design Director of Colefax and Fowler. He was known for his love of blue and white and boy has he gone to town here!  Now you must admit this is a work of art?

I do love blue and white china but I wouldn't restrict myself to just that, but I do think that a dresser should have open shelves. Glazed cupboards may be more practical,  but how can you truly appreciate each object behind glass?  I also think that a dresser needs to be packed with a eclectic mixture, not tastefully arranged with matching sets. Of course this doesn't mean that a lot of thought hasn't gone into the placing of things, which is  why I think it is an art form.

Maybe I am on to something here - move over Tracy!


For those of you who have no idea of who EB is, this is the link to her site - http://www.emmabridgewater.co.uk

Posted by Little Welsh Quilts and other traditions at 10:49:00

Thank you Mary for sharing the Welsh dressers! Very enjoyable for someone who has a dish festish! My collections are meager in comparison to these and are hidden behind cabinet doors.

Mary....I'm so glad you posted this today! I have been talking about this to my husband for years, and have never been able to show him pictures before! He just couldn't imagine what I was talking about for our kitchen! My goal is to put the fridge in the pantry room, and have the dresser against that wall! Our house is from 1865, and a big ugly fridge just looks wrong! But this would look so right! Thanks for the inspiration.....now....to find the right dresser! Hmmmmm.

Me again.....forgot to say, I watched Persuasion with Amanda Root and Cyrian Hinds yesterday! Wonderful! It is now part of my collection, to be watched while sewing....I can't wait to see it again! Thanks for the recommendation!

Regan - You don't have to have a free standing dresser. Kitchen base units and open shelves or a mixture of open shelves and wall cupboards can do the same job. It is more adaptable and probably a less expensive option too. (That usually goes down well with husbands!) Glad you enjoyed my favourite Persuasion.

Oh Mary! You are a woman after my own heart, I love mix-matched china laden dressers. Even though I live in the US I own a EB breakfast set---love those generous-sized cups. Do any of the dressers in your post belong to you?? If not, can we see yours?

Sadly no, but I am thinking of replacing some wall cupboards in my living room with shelves to give a dresser-like look. My kitchen is tiny and has so much on display it is a bit like walking into a dresser! Glad you like EB!

I too love these Welsh dressers. Mine is not Welsh nor as fancy as the lovely ones on your blog but I do have a green one filled with an array of china plates, cups, saucers, sugar bowls, pitchers, etc. None of them really match. I will have to share a pic of it on my blog one of these days!

Fabulous, fabulous Welsh dressers. I just love how they assemble all that lovely china and just stuff it together and it comes out looking so beautiful.