I see that Moda are producing a new fabric range based on the designs of William Morris.  This started me thinking about the great man and his original, rather wonderful designs. I realise that I am rather tired of seeing "Morris inspired" fabric as there has been so much of it produced in the last twenty or so years that, sadly, it has become a bit of a cliche, here in the UK at least.

I also get irritated that somewhere along the line of manufacturing for patchwork, the scale of the patterning is reduced, presumably to make the designs more marketable, whereas the originals were wonderful because of their boldness. Though it may be that they have realised that the very distinctive style and scale of the original Morris's patterns  make them difficult to combine with other fabrics?

That said I am sure, just because I'm not keen, that they won't be popular - this is just my opinion and I'm usually off beam!  After all, I dislike batik fabric but it has been enormously popular for many years now! 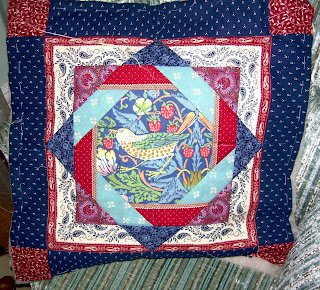 Many years ago, before William Morris prints had their great resurgence in popularity,  I bought a remnant of curtaining in the Strawberry Thief pattern at Liberty's.  I hadn't seen anything like it before and thought I would make a couple of cushions.  They are still unfinished as I really don't need more cushions in this house. The one shown above is the simplest and worked best as I combined it mainly with Laura Ashley fabrics which I find go with most things.

I still like this particular fabric because its scale is close to the original and I was sad to see a subsequent Liberty Lawn pattern where it was miniaturised and I think, lost its integrity.

If you want to see William Morris patterns in their perfect setting I recommend a visit to Kelmscott which was his country house in Oxfordshire.
http://www.kelmscottmanor.org.uk/home 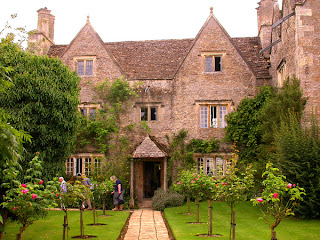 It is a magical place that I never tire of visiting and everyone I know who has been there has fallen under its spell.

On one of my visits a guide told me the of story of a Japanese gentleman.  He had flown in from Japan one morning, taken a taxi from Heathrow to Kelmscott, did a tour of the house and garden, the taxi then took him back to the airport and he flew back to Japan!  Now that's what you call a Morris fan?
Posted by Little Welsh Quilts and other traditions at 09:27:00

My photos from last May when we visited are amoung some of my favorite. I have a lot of the Rose and Hubble William Morris fabric and I have enjoyed using that in patchwork.

I agree about the William Morris being a bit of a cliche now. But no doubt the American market will love them. I suppose we may feel the same about the old Laurie Ashley prints if they bought them back. You know I have lived in The Cotswolds for over 20 years and haven't been to Kelmscott ahme on me. It has got to be on my bucket list for this year.

That should read shame on me.

You have a treat in store for you Sue, but I know that when you live near a place you feel that you can visit any time but you don't. Once you do go though, I am sure you will return as it's a very special place!

Kelmscott is a stone's throw from us in Burford - I went to the house last year with a friend - it is beautiful, not 'grand' but homely and inviting. A lot of the floors are stone, the overall look is simple, with neutral colours that really show off the fabrics. Well worth a visit, and then onto Burford for a Medieval market town - and Cupcake Cottons!

I so enjoy your posts, Mary. They are always so interesting and you include such beautiful photos. I'm putting Kelmscott on my list. My daughter says she's taking me "across the pond" when she graduates from college.

just found your blog through the Jen Jones site. I too dislike batiks and it always surprises me how popular they are! However, being a longarm quilted I see lots of quilts made from an assortment of fabrics and I am learning to be a little more tolerant of others preferences, Not easy at times! As for the resurgence of interest in Welsh quilts.....wonderful! those I remember from my childhood were tatty old and scratchy.....and normally loved by the family pet!!

The Morris tapestries are so beautiful, I agree! I do collect them, but want to be sure there are original patters at the source of it. The "likes" never seem to speak out! And about batiks? I collect them, but most of them are original from Malaisia or Indonesia, sarong and kain - so used for skirts. The commercial batiks I use in quilts for their clear colours where solids turn out to be rather flat. Modern designs call for these I think.
Another site for favorite, it's getting crowded over there ;^}
greetings from a sunny Amsterdam, Irene

Nice to hear from you Irene. I'm a great admirer of Dutch patchwork and quilting. Of course Holland was with us from the very beginning with the East India Company - so we share so much heritage and you still produce lovely fabric unlike us in the UK.

I agree with you about the original batiks but I think the repros have been going long enough now - they are too vivid for me!