The Spirit of Welsh Quilting

I am now going to bang the drum a little, because I have a passion I want to share with you.

In country areas of 19th century Wales quilting was an organic process and perfection was not the goal.  Those who could afford to employ a quilter paid them per quilt and not for their time spent quilting.  Quilters therefore had to be very practical and when they made a mistake they did not waste time unpicking but just kept going and disguised inconsistencies within their subsequent patterning.  This gave their work a vitality that sets it apart, as no two quilts were ever alike. 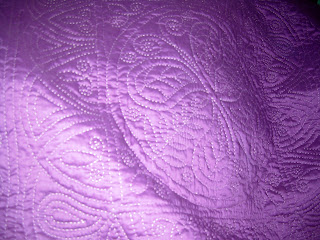 I really admire this approach and try to follow it myself.  I prefer it to the way quilting developed in 20th century when perfection became the goal.  When classes and competitions seem to iron out inconsistencies and the quilts made, though beautiful became, in my opinion, rather soulless.

Of course it had to be this way because the Rural Industries Bureau was promoting and helping to sell quilts in London galleries, so the idiosyncratic style of earlier quilters would not have been acceptable.  We don't have these pressures now as most of us quilt because we enjoy it, so unless we want to win a prize, we are free to return to the traditional organic approach of the 19th century.
There is so much more to quilting the Welsh way than by using a light box to trace a printed pattern onto cloth and then painstakingly follow the drawn lines with quilting stitches!  True Welsh quilting requires imagination and innovation for the quilter to imprint her personality upon the cloth.
Just look at this picture to see how wonderfully free the quilting was - look how the leaves are so wobbly and the spirals aren't all even - 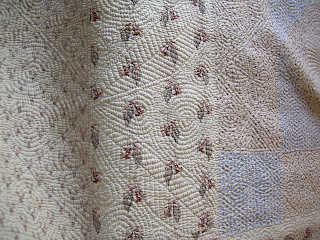 This quilt wouldn't win a rosette today because now quilting is judged differently.  Are we wrong in our values?  What do you think?
This quilt is in the Jen Jones Collection, thank you Jen for allowing me to photograph it and share it with others.
Posted by Little Welsh Quilts and other traditions at 17:42:00

Email ThisBlogThis!Share to TwitterShare to FacebookShare to Pinterest
Labels: Quilting the welsh way

Hi Mary, thank you for introducing me to your blog. It is lovely. These quilts are charming and the quilters seemed to be not only industrious, but creative. Thanks for sharing. I'm not a quilter (having only stitched one under the "eagle eye" of a tutor...she made me rip out several stitches!!) I have to say that the "free quilting" style is very appealing! :)

Ah! But you are an artist Suzanne!

Oh absolutely gorgeous! I love that quilting on the second picture! All those spirals and dense quilting! GORGEOUS

Quilting is valued differently today, and we are the worse for it. The craft is all about handmade which can only allow for inconsistencies. To me, they delight the eye. The aethetics of the past appeal to me so much more. Hope that this doesn't sound like a soapbox, but it's my pet peeve when it comes to modern design and tastes.

I agree that perfection isn't the goal. We are not machines, we are human. Kathie L in Allentown

Most of the quilts that are entered and win are machine quilted. Here in the U.S. a major quilt show will only have a handful of hand quilted quilts.

To me, "perfect" quilts are soulless and don't impress. Rarely do I enjoy quilts that win large competitions because there is so much emphasis amongst judges on "perfection". Give me a quilt that shows the humanness of its maker any day!

You cannot get it absolutely perfect when it's hand quilted and I love it that way. Although I am not an expert, machine quilting is too perfect for me. What you show us here is just wonderful.

Thank you for this lovely post. I think that quilts should be individual, that is what makes them beautiful. Hand quilting is an art, I like to see the difference between hand and machine quilting.:)

What wonderful quilts. I can almost feel their weight. Mary, I know that you feel as I do...we need to preserve these talents and not just be lost to the quick quilt trend.

It makes me want to do more hand quilting.