Well Royal Wedding fever hasn't reached this part of Wales yet!   It is very different to 1981 when we were all so excited about the wedding of the Prince of Wales to Lady Diana Spencer.  Everyone now seems rather disinterested.  I live in a road that enjoys a party but nothing has yet been planned, but perhaps nearer the time?

This week Kate Middleton (or Catherine as she prefers to be called, though the press have decided that she is to be called Kate) has been fulfilling engagements as a future Princess of Wales.  Her first was launching a lifeboat in Anglsey, where William is working as a helicopter pilot.  Click on the link below -

Regarding commemorating the wedding, if we don't want to commit to making something specific, maybe we should record the event on what we are making at the time. 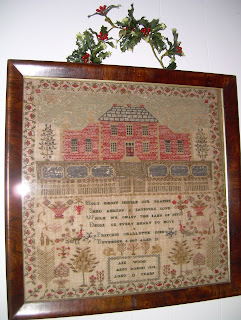 When Princess Charlotte died in childbirth in 1817 it was an earth shattering event, similar to the death of Diana.  If you click and zoom in on the above picture you will see the mention clearly.  Obviously Ann Wood who was sewing this sampler, simply added an extra line and this was done on very many samplers.  Now I know that this a wedding and not a death but it could be recorded by adding it to the label on a quilt?

It was actually very significant death because Princess Charlotte was the heir to the throne and it  led to her cousin Victoria becoming Queen. So it would have been the Charlottian (not sure if that would have been the correct spelling) instead of the Victorian age!
Posted by Little Welsh Quilts and other traditions at 09:36:00

I think that sounds an excellent idea Mary and will ask my sewing friends to do the same to record somewhere on their work that date etc. It is a shame that there is apathy as the young couple do look like they actually love each other unlike Charles and Diana. I for one wish them every happiness.
Shirley.

I've been catching up on your posts Mary - such a delight. How do you keep it so stimulating?!!
Vivienne x

A gorgeous sampler and thanks for the story, it is a splendid idea to do this working on a sampler in April 2011 and will certainly keep that one in mind:))

You have such great ideas! I am planning to take the wedding day off from work to enjoy whatever coverage is on TV over here in America. Perhaps I will add a line to the sampler I am working on, but I know I will do something. (And isn't she,Katherine, a gem?!)

it's great to hear how people are reacting in the UK, i don't know how the rest of America feels, but I personally have taken a big interest in the happy couple and their wedding plans. and I never paid much attention to royalty before now. maybe it's because Prince Wills is just a year younger than me and in some secret childhood princess fantasy i used to think I had a chance, hehe. anyway, I am working on an english paper pieced star quilt and I record the date and location of where i piece the stars, so I think I'll try to piece one as I watch news coverage of the wedding and then capture the moment that way.
I'm new to your blog, btw, I found it through Red pepper quilts. It's quite an enjoyable read, keep it up. :)