I love portraits and if I was as wealthy as Andrew Lloyd Webber, I wouldn't bother with the Pre Ralphalites,  I would be collecting pictures like this one, which has just sold at Christies for £1,721,250. 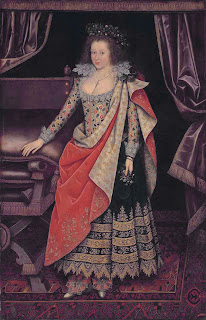 It is a full-length portrait of Frances Howard, Countess of Hertford, later Duchess of Lennox and Richmond, in a masquerade dress with a wreath of pansies in her hair which was painted by Macus Gheeraerts II in 1611.

For an textile person who particularly loves 17th century embroidery, this picture is full of goodies.  Just look at the wonderful dress with a bodice richly embroidered with roses and pansies in the typical style of time, together with that intricate lace around quite a daring neckline and then the cuffs!  Just imagine the work that went into each piece. Then there is the velvet and brocade 'thingy' (non-technical term) draped over one shoulder and the skirt intricately embroidered with spangles which would have shimmered in the candle light as she moved.

Portraits like this one were all about showing the wealth and status of the sitter and every item included is full of significance. Oh I would love to talk it through with someone who understood - maybe Philip Mould of Antiques Road Show fame, but maybe he's bought it, it's very much his thing?
http://www.philipmould.com/aboutus.php

Well who was she?  She was a cousin of Queen Elizabeth I, married at thirteen and considered one of the beauties of the Stuart court and painted by other artists including Van Dyck in 1633.  She married three times but didn't seem to have produced any living children but did accumulate great wealth. 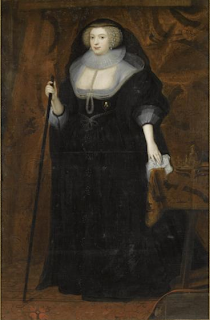 A much more sombre outfit in this portrait, obviously now in widow's weeds.  She died in 1639 and was buried in Westminister Abbey next to her third husband.  As there were no children, the title of Duke of Lennox was passed to a younger brother and the Richmond part became extinct, but Frances was still known as the Duchess of Richmond. 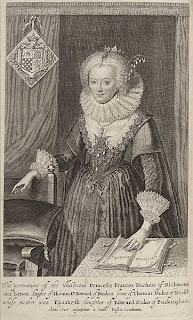 Now you on the other side of the pond will probably know about this, apparently she was a patron of Captain John Smith of the Virginia Colony and gave him financial support.  Is Richmond, Virginia named after her or her husband?  If so, maybe some rich Virginian might have been interested in buying the portrait?  However there would be problems as an export license would be difficult to obtain.  I would love to know what will happen to it!
Posted by Little Welsh Quilts and other traditions at 19:20:00

How fabulous would that dress have looked in the flesh so to speak. Before I even read what you had written I said wow! Cannot offer any help with the naming but love the blog subject Mary. Even the decoration on the shoes is amazing. Such opulence.

How did she dare wear that neckline. She must have moved slowly and with determination. Lovely lovely textiles. The lace around the neck in the 1st picture would be so facinating to see first hand.

as my mother would have said'she certainly was a dresser'....

Being a shoe girl I'm fascinated by those extraordinary "poufs" (another non-technical term!) on her shoes!

Fabulous. If I had the money, I'd have been bidding on that! The jacket does it for me. It is so similar to Margaret Layton's jacket at the V & A and they have the portrait of her wearing it. I wonder what happened to the jacket in this one. As the Margaret Layton jacket has been withdrawn from show due to the threat of light damage, it has been replaced with the panels from another... very similar to this one.