Welsh - I think not!

It's usually the other way around - a Welsh sampler mistaken for an American one!  This sampler is thought to be Welsh but I'm not so sure it is.  It was sold at auction a few years ago and I remember being mightily impressed with it.  Now it is appearing on Pinterest as Welsh, so I thought I would air my doubts about its origin. 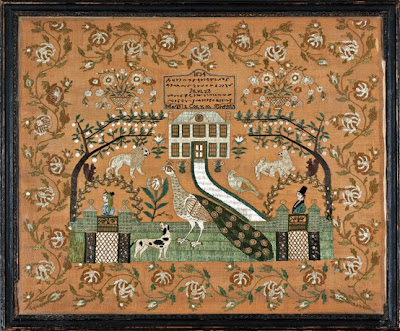 This is the link where you can see more detailed pictures and read all about it - there's quite a bit to read so I thought this would be the best way.

Now I would love to claim it as Welsh but I just can't believe it.  Somehow it is all wrong.  I know Griffith is a Welsh name but that is all that is Welsh about it.

If you read through the text on the website you will notice that whoever wrote it found it unusual and mentions that it is unlike other Welsh samplers.  Well I agree.  If I were to take a guess and bearing in mind that I am no expert on American samplers, I would guess at Pennsylvania being the place of origin. There are lots of Welsh names there I should imagine. But the style, format and detailed work on this sampler suggests American to me.

Though my new blog is dedicated to Welsh Samplers I still want to talk about samplers here, especially as this one is of more general interest.  Are there any experts on American samplers out there reading this who would give an opinion?  Wouldn't it be good to trace its source, because there must be more like it as it's very rare to find a one off!

Posted by Little Welsh Quilts and other traditions at 10:15:00

After I get done with a quilt edging (today or tomorrow) I'll look through a few books on American samplers to see if I can find any similarities. I am by no means a "expert" but I do have a few references, and this sampler really interests me. I'll be back in touch.

Can't really enlarge the picture much, but it appears to have the letter "J" in the text. The letter "J" has only become part of the welsh alphabet in recent years.