I'm sorry to have been away so long!  I haven't been feeling like blogging and have been considering having a Facebook page instead!  Several friends have asked me why I haven't been writing here and there's no easy answer except that I couldn't think of anything to write about!  A writers block maybe?

I am having roof work done on this house which is quite unsettling, especially while typing this there is lots of banging going on just over my head!  A prior owner of this house, which is now 107 years old, had replaced the original slates with tiles and I have been having it re-slated in affordable stages.  We are on the last lap and I must say I am really pleased with the look and as slates are far lighter than tiles they are so much  kinder to the roof timbers of this old house.

Though I live in Wales and we are famous for our production of slate, I had to be content with Canadian slate because there is such a shortage of Welsh at the moment.  The resurgence of building after the economic downturn is being blamed and we had to wait in the slate queue quite a while!  It's absolute madness to think that I couldn't support my home country's slate industry but actually there is very little difference.  They look and cost the same as the Welsh, so it's our secret!  Annoying though, but thank you Canada for producing such good stuff! 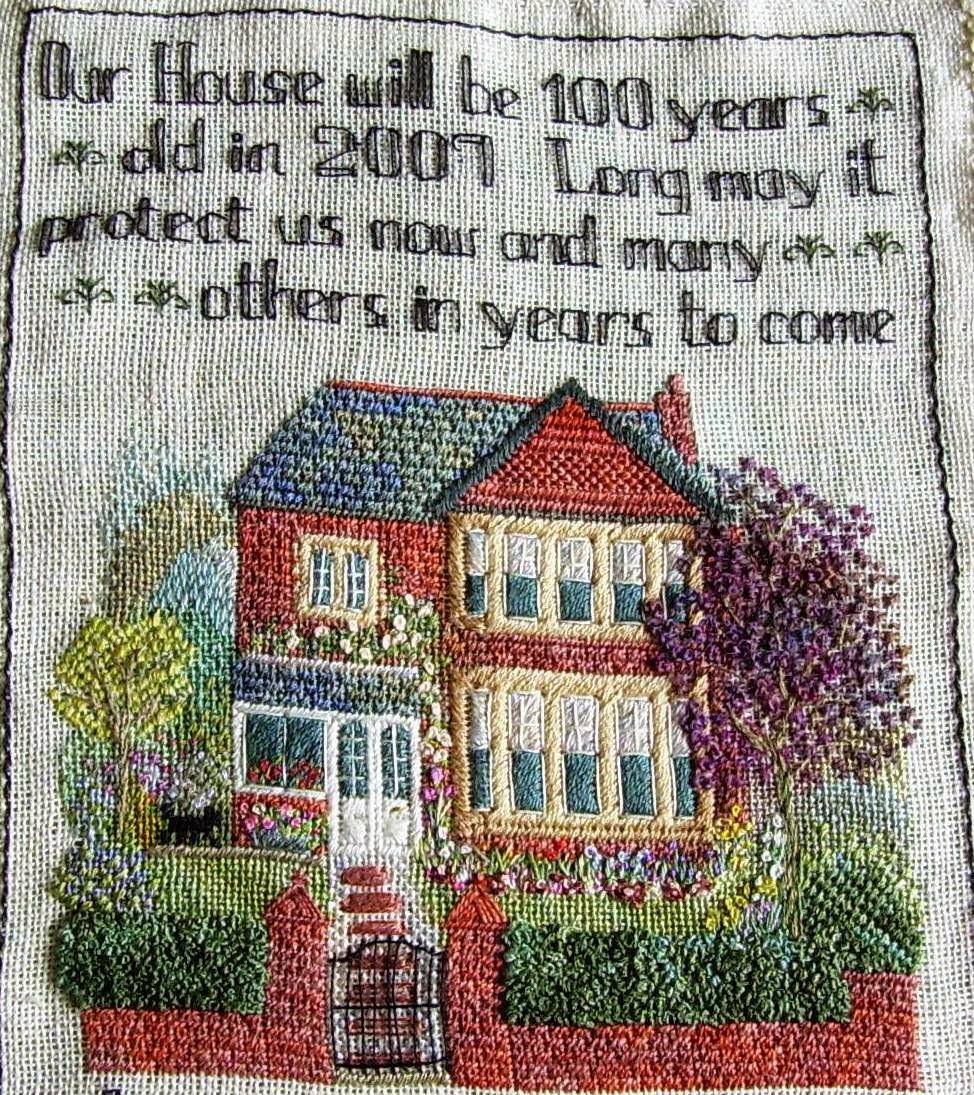 When we first moved to this Edwardian house, I worked this sampler to celebrate it's 100th Birthday and I cheated a bit and gave it a slate roof because I always hoped that one day it would have one!  Now it has, so at least one dream has come true and it looks more like it's needlework depiction.  Sadly, Frank, my dear black cat, is no longer trotting up the path to the front door but is buried in the garden.  He is not forgotten even though I now have Bella and Wilfred!

Since my marriage, I have only lived in two houses and both have been Edwardian, so I have become very fond of houses of that era.  I read somewhere that it was the high spot of building standards in the UK and I can quite believe it.  It was just before World War 1 and that was such a life changing four years for this country, things have never been the same since in so many ways!

Edwardian houses were build to last and had high quality material, sadly though they are beginning to show their age and need a great deal of maintenance.  The good thing is that young people greatly appreciate them and I am surrounded by younger neighbours who have moved in and are busy restoring all the original features that were ripped out in the 60s and 70s.  Though everyone I know, who loves houses, seem to long for a Georgian house, Edwardian ones are perhaps more attainable and better build?

I have recently begun a board on Pinterest so if you would like to see and learn more, here is the link
Posted by Little Welsh Quilts and other traditions at 17:29:00

3 cheers ! lovely to see you again , you have been missed.
how funny that your roof is the topic, i too am looking for some one to replace the roof on my [late victorian house] also in welsh slate. the first builder wanted to use some kind of fake stuff but like you i am not keen. my main problem seems to be the height of the house, no one fancies going up there these days ! it was not a problem 40 years ago when we bought it.
i hope that you are over the writers block, i for one am happy to read about what you had for your tea if that's all there is !
quilt wise i am having a log cabin moment and am on with my second one. what next !