After being around the quilting world for so long, I don't make Christmas patchwork items for the home - I've been there done that and don't want to do it any more!  However, I do like the idea of a Christmas quilt but only tend to think about it just before the big event, usually when I see other peoples and then it is too late to do anything about it.  In January, I thankfully put all thoughts of Christmas out of my mind, so sadly I don't have a large red, white and green masterpiece to show you. 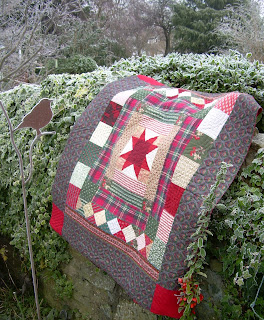 When I was working on "Making Welsh Quilts"  I made an alternative to the Paisley Star project quilt (see earlier post) in Christmas colours, but not using Christmas fabric which I don't like.  Only the patchwork top was featured in the book but afterwards I quilted it quite densely and I have braved my very wintry garden to photograph it - 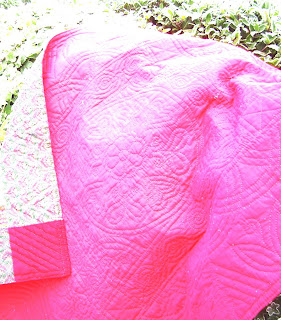 I also tried to photograph the reverse with not a great deal of success - I had to twiddle with the editing buttons and it is a bit under/over exposed (whatever) but it was the only way to show the pattern, so please forgive?
Posted by Little Welsh Quilts and other traditions at 08:17:00

Looks like a very nice christmassy quilt to me- It has that lovely homespun look which I personally love. Your quilting is amazing!

I do like your "Christmas" quilt, it will do it for me:)) I am the same, I get all the big ideas too close to Christmas, so I am glad I started the Christmas tablecloth BOM in September and I have just started to quilt it, so with a bit of luck...Thank you for your visit:)

Looks absolutely spot on Mary! I think it's the plaid that makes it for me.