Strange things happen!  One morning  last week I was vaguely thinking that I would write something about Averil Colby because I own some little bits of her patchwork and thought that you might be interested in seeing them.  When the post came later in the morning there was an invitation from The Quilters' Guild to attend the Private View of  "The Averil Colby Legacy" at the Quilt Museum on 5th February next.  Quite a coincidence as I had no idea that it was scheduled - obviously did not read my Guild magazine thoroughly enough! 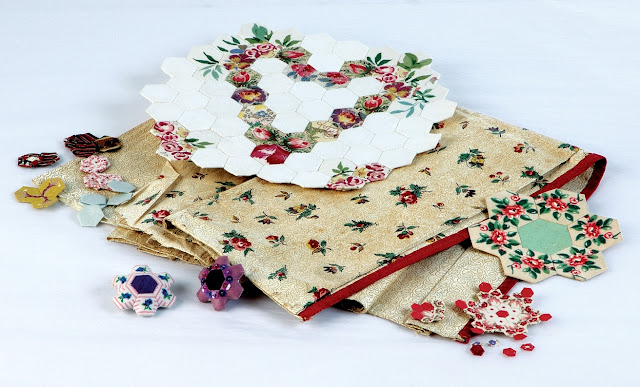 Here in the UK Averil Colby was probably the most influential patchworker of her time.  She was Chairman of the Handicraft Committee of the National Federation of Women’s Institutes (to give it it's full title but it's usually known just as the W.I.) and was instrumental in organizing courses, classes, and exhibitions of handicrafts that helped keep the flame of patchwork alive through the years when it wasn't at all fashionable here. In 1980 she was recognised in the States and was the first person from the UK to be inducted into The Quilters' Hall of Fame.

Gardener, patchworker, designer and author, this formidable lady was particularly known for ‘foraging’ fabrics and her use of the traditional English hexagon shape and she used to say that her fabric collection spanned 200 years. She did not believe in using a sewing machine and thought patchwork was an excellent way of teaching plain sewing.  Can you imagine what she would think of how things have developed and changed?  What would she think of the rotary cutter?

Her books are well worth reading and I refer to them very often as they are really the only ones that deal with historical British patchwork. Not quilting, because Dorothy Osler and Mavis Fitzrandolph did wonderful books on that - 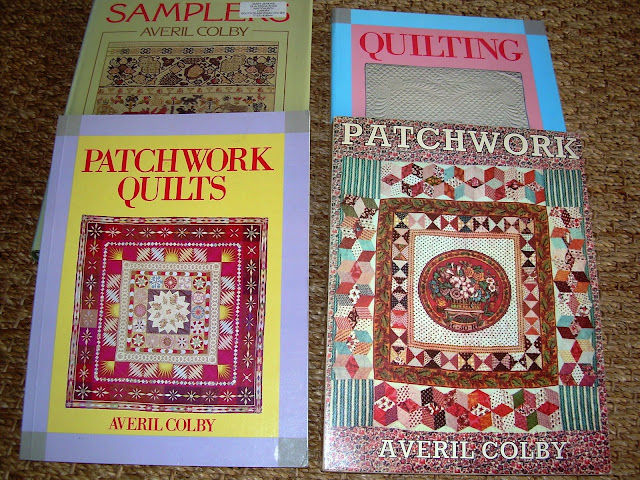 When she died, some of the items from her workroom were left to The Quilters’ Guild and I remember being present at a Regional Reps. meeting at Margaret Petit's house in Pewsey and hearing how two Guild members ( I think one was Jean Amsden) had visited Averil Colby's house in Somerset and had been quite overwhelmed by the amount of fabric and unfinished work from which they had to choose. They brought quite a selection to the meeting and though the larger pieces were kept for the Guild Collection, we Regional Reps. were invited to take some bits as a keepsake.  These are mine - 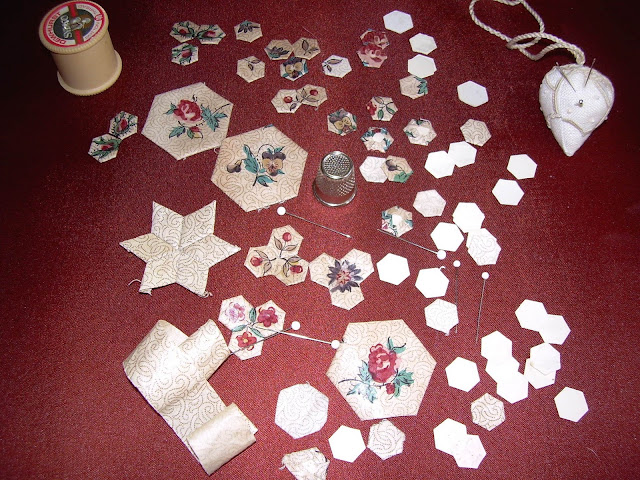 If you click the picture and zoom in you will see that some pieces are very tiny indeed and the fabric (you will see a little roll of it in the foreground of the picture) is like paper, being very thin and stiff. 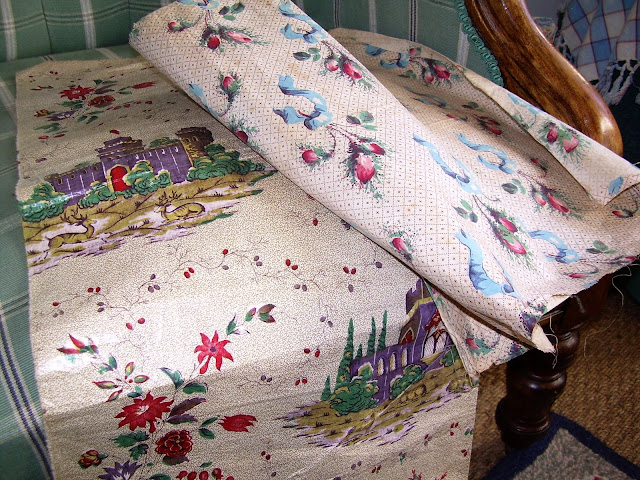 I don't think the sellers realised what they were and if I hadn't had my Averil Colby bits, I wouldn't have either.  I wasn't sure of their age then, now I think they are pre 1800, but this has not been confirmed. Eventually they will all go to the Guild but I will enjoy owning them for a bit longer I hope?

A selection of the Averil Colby fabric samples will be included in the exhibition being staged in the Bailey Gallery. Do go and see it if you can - we all need a treat in February.

For more information,  this is the link
http://www.quiltmuseum.org.uk/exhibitions/forthcoming/the-averil-colby-legacy.html
Posted by Little Welsh Quilts and other traditions at 14:05:00

How fortunate you are to have some of her things to remember her by. I am inspired by looking at them, tho it will probably be forever and a day before I do another hexagon quilt. I sure enjoyed the one I did; it was my first quilt, and I did it over papers. But I've moved on now to applique and a bit of piecing.

I'm coming along beautifully with my Brecon Star, by the way. I love that pattern. Thanks so much for creating it. Is there some way I can send you a photo when it is finished?

Oh...lucky you. I was able to pick up a couple of her books at charity shops (I bought one in NZ, I live in Canada!)

Lovely pictures & story of Averil's work, I do have some of her books and she certainly was an accomplished needlewoman.
I love your fabric too.
Thank you for sharing, shame the exhibition is in York, a bit to far for me.

I enjoyed reading this - thanks!

It is always great to read something about our heroes, so thank you for writing this. I have all four of the books pictured, but in different editions, maybe reprints, or maybe book club editions, which is how I got them here in Australia.

Hi Mary, I always enjoy reading your posts and this morning's was no exception. You have the most interesting and varied 'treasures' and I'm so glad you share them with us. Those hexagons are a fabulous example of 'fussy cutting' and so tiny...:-)
Thanks again,
Margaret

What lovely goodies! Thanks for enlightening me on Averil Colby. I'll be on the lookout for her books.

Hi Mary
I really enjoy your blog. Hope you don't mind but I have nominated you for a Liebster award - details on my blog.

Gosh I am honoured Janet - I've just been checking it out and reading some of your recommended blogs.

Mary - I would love to see your Brecon Star but am not sure how as I don't really want to publish my address. Perhaps someone out there could advise?

Thank you for sharing, Mary! I own two of Averil Colby's books and I have learned so much of it. I would love to visit the Quilt Museum to see all these wonderful goodies!

RE communicating with Mary, she could send you a private message on Facebook . . . Any good?

I loved reading this one, after you showed me the fabrics during my last visit. You are such a mine of interesting information.