A Jane Austen afternoon with quilting

After the success of ordering the book I had been searching for (in my last post), I decided to settle down and watch my favourite Jane Austen DVD and do some quilting on my Charles and Di Royal Wedding Quilt.  It has been a dark rainy week here so one doesn't feel so guilty settling down to something enjoyable after lunch.

I can happily watch every version of Jane Austen but my favourite is "Persuasion" - the 1995 BBC version with Amanda Root and Ciaran Hinds.  There was a great deal of hype about the more recent version and though Rupert Penry-Jones is certainly worth gazing at, perhaps he is a bit too handsome to be Captain Wentworth and I certainly didn't like Sally Hawkins as Ann Elliot.  Amanda Root's performance was wonderfully sensitive and my heart was sore for her and her situation. I am always moved watching it and Ciaran Hinds isn't bad either!

If you haven't seen it do take a look.  Likewise the 1980 version of "Pride and Prejudice" with Elizabeth Garvie as Eliazbeth Bennet. The later version with Jennifer Ehle and Colin Firth was again dreadfully hyped up and I thought them both miscast, but of course I know that this is a minority opinion!

I would love to know what you think and who is your favourite character? 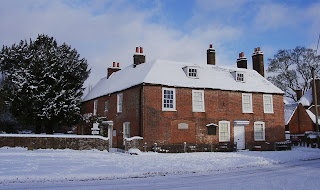 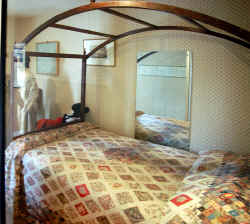 though I can't think that there are many patchworkers out there than haven't heard about it?

In the mail today was the January edition of Patchwork and Quilting Magazine and I couldn't think why, but on flicking through it found that this blog has been named "Blog of the Month".  Thank you P&Q Magazine - that was unexpected and a lovely surprise!
Posted by Little Welsh Quilts and other traditions at 17:29:00

Well done Mary for being blog of the month. My favorite has got to be Colin Firth as Mr Darcy. and would you believe I was originally Miss Bennett before I married.

Why should you not be 'blog of the month' I read it and my taste is immaculate...

I'm not familiar with your favorite versions and will check them out soon. It's always hard for me to pick favorites... Elinor Dashwood I think. Congratulations on being "blog of the month" - you deserve it!

I watched the recent production of "Pride and Prejudice" last night with Kiera Knightly for the first time. Although I liked Kiera's portrayal of Elizabeth, I preferred the mini series version with Colin Firth as well.
Happy sewing this weekend.

It must be Jane Austen day, because I was watching Pride and Prejudice this morning! It was the Colin Firth version (which I've seen at least 100 times) and was thinking that I should be expanding my Jane Austen video collection....I keep watching the same ones over and over! I love Ciaran Hinds, especially in Jane Eyre with Samantha Morton....He makes a wonderful Edward Rochester! And I really liked him in the Mayor of Casterbridge....a scheming devil, but he's wonderful in the role.

I will definitely be checking out the versions of P&P and Persuasion you mentioned....I love anything Jane!

Congratulations on Blog of the Month....no surprise to your followers!

And while we're talking Jane Austen....I must say that reading your blog is like reading one of her novels....your language is charming and graceful. I've been wanting to say this to you for some time now, and this post was so fitting to say it.

congrats on blog of the month! I agree, really enjoy reading your blog!
Love your choice of movies too!
Kathie

Congratulations on being chosen as blog of the month - well deserved. I am a great fan of Jane Austen and have a lot of the DVD's but will add the Amanda Root "Persuasion" version to the collection. I really enjoy sitting in front of a Jane Austen story and hand piecing or needleturn appliqueing. Happy stitching!

I've got to go with Colin Firth as Darcy as my favorite. Second best is Alan Rickman as Col. Brandon in Sense and Sensibility. All that repressed passion. Yum. But here's the question, why does my husband always walk in and starting a conversation in the last 15 minutes of any Jane Austen mini-series. It's like he's got radar! LOL.

I adore that Persuasion too! Amanda Root really grows as Anne, they don't do the usual thing of making her bright and pretty throughout but actually show her at the start as a woman who has "lost her bloom". And Ciaran Hinds is dead sexy - erm, a wonderful Captain Wentworth. I admit to fancying him ever since seing him on stage in Machinal about fifteen years ago or so, where he was absolutely magnetic.

I'm quite fond of the P&P you mention. Fay Weldon was very faithful to the original novel, although the pacing does leave something to be desired (she really gets Austen, but she does not get TV adaptations in the way that Davies does), and the Darcy is rather wooden. They actually had a prettier Jane than Elizabeth for once, and it makes such a difference, especially since the Elizabeth was still and quite easily more interesting to watch than Jane, which is just as it should be. Nice to see a more sympathetic approach to Mrs B as well.

Have you seen the Mansfield Park that the BBC made around the same time? I bought the BBC boxed set the other year, and it's arguably the best of the bunch. The main actors are all a little too old for the parts, but at least they're all the same age so it doesn't really matter (as opposed to, say, that creepy Rebecca where Mrs de W was the right age but Charles Dance was playing Maxim in his SIXTIES), and they are absolutely superb. They got all the *weirdness* of that novel spot on, the peculiar semi-incestuous relationships and the power games and the messed-up families, and they managed to make Edmund charismatic and flawed (far from the perfect bore some people think he is) and Fanny rather neurotic (understandably!), and Anna Massey is a great Mrs Norris, and Lady B as a laudanum addict (unspoken but obvious) suddenly made sense of all her strange behaviour.

And now you're making me want to listen to an Austen for the next audiobook to quilt to!

Thank you for all your comments and congrats. Well I know Colin Firth is difficult to unseat as "the" Darcy but I hope you will look and enjoy some of the other versions. Please comment when you have. Special thanks to Regan for her massive compliment - I am lost for words!