Of course you all know what a Palampore is?

Well in case you don't, according to Wikipedia - it's a type of hand-painted and mordant-dyed bed cover that was made in India for the export market during the eighteenth century and very early nineteenth century. Only the wealthiest classes could afford to buy one; therefore, the few examples that have survived are often quite valuable today. Palampore were primarily exported to Europe and to Dutch colonists in Indonesia and what was then called Ceylon.

When Jen told me that she had one in her collection, but it had never been shown because it is very large
( 322 x 225 cms.) so difficult to display, I couldn't wait to see it! 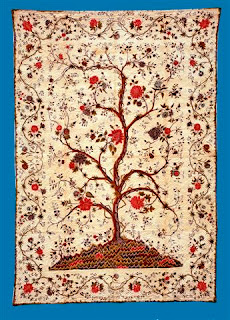 Fortunately I didn't have to wait too long because it was there in all it's glory at the Opening of the Jen Jones Welsh Quilt Centre in 2009 and again last year.  Follow the link below to see the BBC coverage of the preparations for the opening -
http://news.bbc.co.uk/1/hi/wales/8179225.stm
You will see too that the Gallery at the Centre is extremely lofty so the largest of quilts can be accommodated. 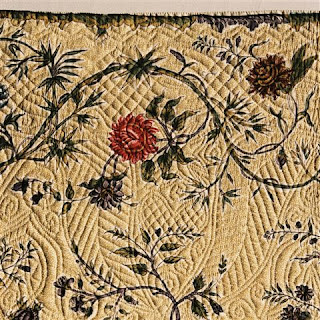 The quilt comes from the Court Estate in the Gwaun Valley in North Pembrokeshire and was made in 1810 for an important Welsh family, the Mortimers, who had descended from the Marcher Lords who defended the Welsh Border for the King in Medieval times.  The last member of that family Mrs. Mary Lettice Mortimer Ehlers, then living in Bristol wanted it returned to Wales and it was sold to Jen by her daughter.  So it is now back almost on home territory! 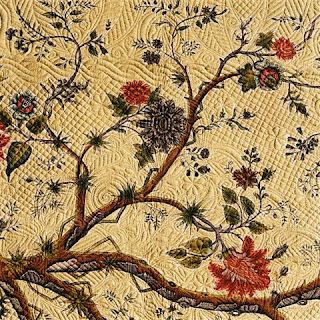 The Tree of Life pattern is printed on cotton from the Coromandel Coast of India and is wonderfully vibrant as the quilt has obviously never been used.  It is filled with lambswool and is covered with sumptuous Welsh quilting patterns including hearts.  This may indicate that it is a marriage quilt, though the heart motif became so widely used on Welsh quilts this couldn't always have been true.  However, as this quilt is early and was made for a notable family it might well have been the case. The quilter was most probably a professional, as ladies of status did not do (hand) quilting - a bit like today really!

Thank you Jen for allowing me to blog about this truly special quilt and for Hazel for sending me information and pictures.
Posted by Little Welsh Quilts and other traditions at 09:08:00

Wow, this is just stunning! Love the detailed quilting.

I love, love, love this quilt + all its fabulous quilting.Thank you for showing the pics.

Sensational. One can only aspire to be able to create something so special. I'd love to see it in person! Thanks so much.

Thanks for sharing it, I agree with Kate, I'd love to see it in the cloth.

Thanks for sharing the photos...the quilting is amazing.

this is really a very nice quilted palempore!
thank you for sharing it with us!
irene from amsterdam

What an amazing piece of art - the quilter who did that must have been very, very skilled and talented. I am full of respect.