Cowbridge is a little market town in the Vale of Glamorgan and a favourite place to visit!  It has lots of interesting shops and excellent places to eat and also a good charity shop.

Normally I am not a charity shop browser but I ventured in to see if they had any crochet hooks.  Yes I've  decided to try crochet - haven't begun yet but one needs hooks to start!   I bought three hooks of different sizes and then, across a crowded shop, I spied some EB - 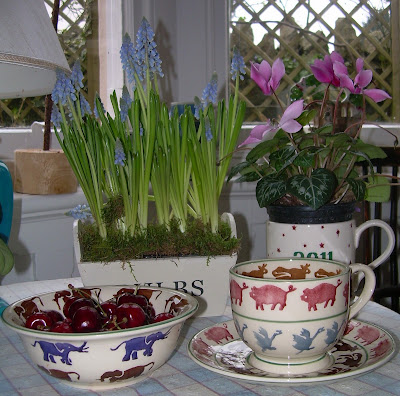 It was just sitting there on a shelf waiting for me - well who could resist?

Though they were sold as a set, they are actually two different patterns - Elephants and Farmyard and better still, they are early sponged ones which are now sought after and I have neither!  Good result!

(Jilly if you are reading this?  Thank you so much for the grape hyacinths in the picture.)

If you look on the side of this blog you will see that you can now follow me on Pinterest - thank you  Karmen for my invitation which I shamlessly canvassed here!  I have had such fun creating boards and filling them with all my favourite pins, though it does take so much time because one can't help following other people pins.  Do take a look.

Posted by Little Welsh Quilts and other traditions at 11:35:00 6 comments:

As I have probably mentioned before, I love collage and I have recently discovered Mandy Pattullo. This is some of her work - 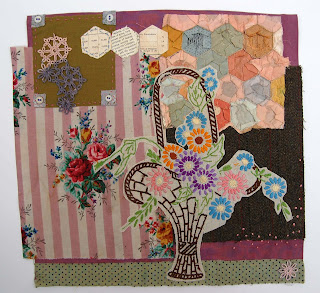 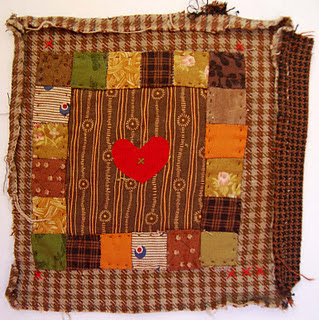 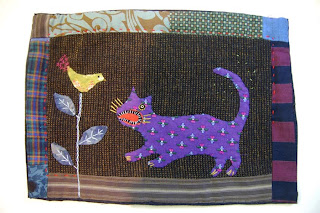 I was going to show you more but for some reason Blogger has gone on strike and won't upload the images, but do go to her website and browse.

What I love about these pieces is that she uses old bits of everything and puts them together in such a wonderful way.   I long to do this but that would mean starting to collect so much more stuff and I am already bursting at the seams with fabric and thread, I don't want to start saving old clothes!  Though I know deep down that there's a lot more to it than random pieces of re-cycling - an artist's eye is required!

Posted by Little Welsh Quilts and other traditions at 08:48:00 4 comments:

I have just been given a newspaper cutting - an obituary of Erica Wilson who died on the 13th December.

I was so sad to hear this because she had quite an influence on me as she helped demystify embroidery and gave me the courage to have a go at it.  After I joined my local Embroiderers' Guild Branch I learnt that many of my fellow new members had watched her TV programme and they too had been inspired. 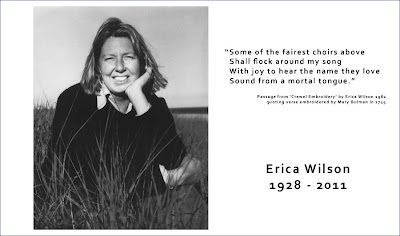 I can see her now bounding onto the TV set full of enthusiasm, explaining each week a different method of embroidery, so that when the programme ended we just wanted to drop everything and start!  Of course this was impossible, because the BBC, in their wisdom had chosen a late Sunday morning slot, just when most of us were preparing Sunday lunch.  This was before video recording and typical of how TV schedulers treat women;  instead of giving us a nice afternoon slot when we could sit down and enjoy such a programme, oh no, that would interfere with men's sport!

Anyway rant over - back to Erica.  When I had any embroidery problem it was her embroidery book I turned to and it never let me down - 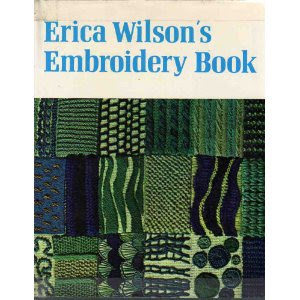 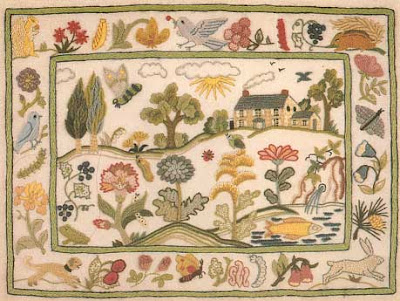 I admired it then and I still like it now, but I never tried crewel embroidery - too scary,  but then Erica learnt at the Royal School of Needlework where she later taught, before crossing the pond!

RIP Erica Wilson and thank you.

Posted by Little Welsh Quilts and other traditions at 11:03:00 5 comments:

I am particularly fond of the large woollen samplers that were made in great numbers here in Wales in the second half of the 19th century, long after sampler making had faded away in other countries.  Samplers something like this one - 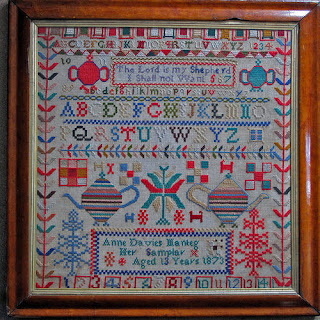 It certainly isn't a conventional sampler design, but isn't it fun?  Quite zany - zaniness being something that these large woolly samplers have in abundance and something they share with many Welsh quilts.  Here is a detail of a teapot - 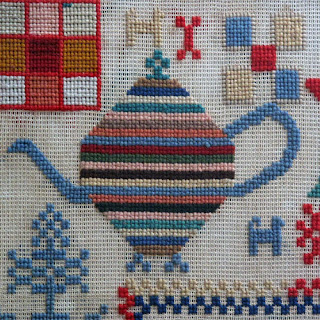 This sampler is actually for sale - for more details click here.

When the craze for Berlin woolwork swept across Europe, canvas and wool became more affordable and girls from poorer backgrounds could then make a sampler.  Welsh girls took up the challenge with enthusiasm using these new bright wools and the large meshed canvas instead of the more costly silk and linen.  They sometimes included a new Berlin motif on their samplers, but they usually stuck to the traditional motifs that had been used on earlier 19th century Welsh samplers.

These large woolly samplers are the Cinderellas of the sampler world.  Most collectors want fine needlework and these Welsh woollies don't fall into that category.  They really are folk art and look extremely decorative in a "country look" setting, especially combined with quilts!

I have great fun hunting for Welsh samplers on websites and in catalogues because, unless they have some words in Welsh, they are usually credited as English and then I  try to correct this.  Welsh was banned in the schools of Wales for many years, but in the latter part of the 19th century you begin to see Welsh quotations and biblical verses appear on samplers.  As speaking Welsh is fashionable again and has been heavily subsidised by government, many of the new Welsh speakers now favour samplers that include words in Welsh. 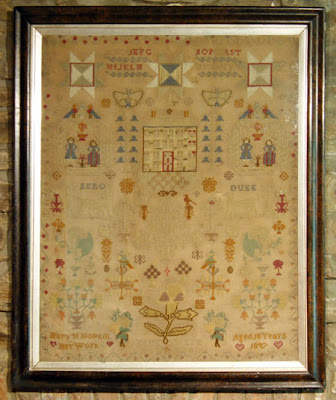 When I  study the one above for Welshness, the easiest and most obvious clue is the name  - Mary Hopkin or Hopkins, this being a very Welsh surname.  Then there is the very large naive flower at the base of the sampler which is a Carmarthenshire favourite and the two pairs of figures on either side of the house also appear on other samplers from this county.  So the chances are that this is a Carmarthenshire sampler.  It can't be proven until another similar one turns up with maybe a place or school name stitched on it .  This will then help identify any other ones that appear and then perhaps a group from a certain place can be identified.

I have doing this detective work for many years and have more than enough material for a book, but despite trying very hard to find a publisher, all my writings and photographs are languishing in a deep drawer in my desk.  However, there are now many new ways to share information, blogging being one of them.

When I began writing this blog I did a piece on Welsh samplers and showed some that I own, strangely that post has disappeared from my archive?  Blogger has obviously had a glitch but I may well show them again in the future, but I don't want to bore you with too much in one post!
Posted by Little Welsh Quilts and other traditions at 09:12:00 7 comments:

Portrait of a young woman.

Normally I have no trouble thinking of things to blog about, but since being ill over the festive season, my brain seems to have seized up and nothing seems interesting enough to write about.  Today, however, I have stirred  my stumps and as it is mild and not actually raining, I have ventured into the garden to take this picture of my latest acquisition. I saw her on eBay and though I instantly fell for her, obviously no one else did, because I was the only bidder and she went for a very reasonable price.  This rarely happens to me, but I can't help but feel rather sorry for the seller, because I would have been prepared to pay more.

Hasn't she got a rather serious expression? My first thought was that she might have been a maid servant because she doesn't look a very happy bunny, but servants rarely had their portraits painted because they were considered part of the furniture and were expected to keep working rather than sit around having their portraits painted.

We shall never know - but isn't it intriguing - I do love portraits!  Maybe I will name her Ernestine?   I'm open to suggestions!
Posted by Little Welsh Quilts and other traditions at 13:25:00 7 comments: