I have moaned about museums before on this blog, especially when it comes to information on quilts! This is the latest episode.

I saw this quilt on Pinterest, it may have been about for a while but I have only just picked it up! 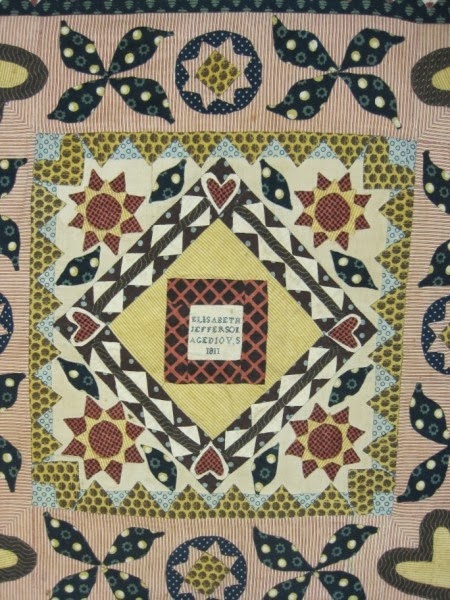 It has the dramatic impact of a Pennsylvanian quilt but I immediately thought it was English, or at least from the UK!  I can't explain why, but I suppose it helps saturating your brain with quilt images!

It isn't at all typical as it's very organised for a early 19th century UK patchwork.  Obviously it was planned, almost designed, which is unusual.  It also has a limited colour palette, which is more in common with American quilts, as here we tended to throw all our fabrics in!  The use of spotted fabric too is a bold choice and not often seen! It's annoying that we can't have an image of the whole quilt! Obviously there must be borders because you can see the edge of one at the top of the picture and according to the description below and the sizes given, it is rectangular.

So I have been trying to find out more!  It is on the website of the Manchester Art Gallery but then there was absolutely no information that could find. I have lost track of how many messages I have sent both direct and through Facebook.  Then there were several phone calls to no avail as I was cut off twice while the operator tried to transfer me to another department grrrrr!

Well at last, about three weeks later, I suppose not too bad because I know museum staff are spread thinly in these straightened times, I have had a reply!  But why couldn't they have put this on the website in the first place! Apparently it has been now, so at least I have achieved something!

Here are the details -

Printed cotton patchwork.
Highly complex geometric pattern with applied motifs in a range of curving motifs; centre square with inscription in blue cross stitch: "Elizabeth Jefferson, aged 10 years 1811".
The quilt is pieced but not quilted, entirely sewn by hand. The large central square edged in green pieces, measures 100 cm square with stylised hearts, petals and stars in blocks. The outer rectangles have flowers, leaves and square blocks in strips.
There is a frame edging, 8 cms in from the edges of the quilt comprising strips of zigzag pieces.
The backing is of cream cotton, edged with cream cotton binding.
The cottons all appear to be very early 19th century.
L: 275 cm
Width: 248 cm

So there you have it!  An absolutely stunning early quilt with the name, age and date of Elizabeth Jefferson.  I wonder if it was a memorial quilt as I can't imagine a 10 year old stitching this, even in the early 19th century?

The name Jefferson is one to conjure with also?  Wouldn't it be wonderful if it could be proved that she was one of THE Jefferson descendants!  After all Thomas Jefferson's family are supposed to have come from North Wales and that's not so very far away from Manchester!

The museum curator doesn't hold out any hope of this because all the information they have is that it was a donation made in 1942 from someone who lived in Sale, which is a town in the Greater Manchester area.  This was at the height of the War, so maybe they feared for their and the patchwork's safety and wisely passed the responsibility on!

Posted by Little Welsh Quilts and other traditions at 09:10:00

This is interesting for lots of reasons. I wonder if we in the 21st century with our needle skills greatly forgotten whether we assme children cannot produce this sort of work. I am not saying it isn't a memorial coverlet but I do wonder...
And isn't it very unusual to have a binding on an Engish quilt/coverlet?

I had to pin this quilt when I first saw it--so exuberant! Very interesting to get some more detail about it!

An Australian quilter named Anne sommerlad has reproduced this quilt in full. Here is her contact
http://www.annesommerladdesigns.com.au.
It's pretty amazing.

Thanks Chris - but though I followed your link I couldn't find the quilt! Perhaps she hasn't done a pattern but I would be very interested to see it?

Mary, looking at quiltsmith australia blogspot June 14, 2011 and on google image
(elisabeth Jefferson quilt) at Berrima Patchwork. You will see the quilt designed by an Australian. Friendship for you

Hi Mary. Anne does have a pattern. Maybe you should email her?

Thank you Chris - I did find Anne and the pattern and my next post will be a continuation of the story!

Hi Mary, I would love to see this quilt and as I live in greater Manchester will try next time I am in the gallery. I have never seen it on display there and I wonder if it has been at the Whitworth or Platt Hall museum of costume, One to find out, though i find Manc art galleries website difficult to negotiate !
I have been putting the hours in on my first medallion quilt and at first it all went swimmingly.... now I am noticing all my mistakes and construction errors and feel frustrated by my lack of knowledge and skills. I have put it on one side for a while to think what to do next ie. start all over again on a new top or finish this best I can. So exasperating ! What I need are lessons but as it is I don't even know a "real " person who makes quilts or anyone who doesn't think it an odd thing to want to do !
Ho hum, on with the next one I think .

Hi Susanhal - I think this coverlet is at Platt Hall but of course it isn't on display! I am posting more about it almost immediately but any local help would be appreciated!

Sorry you are having difficulty with your quilt but it is no bad thing to take a break. There are quite a few books on Medallions and lots online! My little book has lots of tips on choosing fabric for them. The most important thing is getting the proportions right. I do this by drawing out my initial design on squared paper. This helps with proportions and once you have that you can scale a quilt to any size.