Blogland is a wonderful place where you can learn so many things.  One of my favourite blogs is http://needleprint.blogspot.com/ which is full of information and which eventually led me to this appliqued and pieced coverlet.  It came up for auction at Penrith Farmers' and Kidds auction last Wednesday. 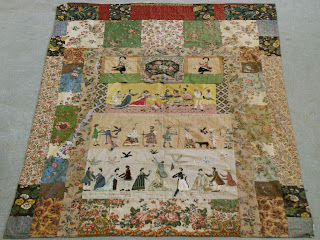 To quote from the catalogue it is -
A 19TH CENTURY PATCHWORK COVERLET having three central appliqué panels depicting various historical and social events with text, the upper section having an over hanging panel centred with a patterned material printed with banners reading 'Wellington Vittoria' and flanked by appliqué soldiers on horse back, this concealing religious imagery from the mid panel, all within an outer patchwork border. 229cm(L) x 170cm(w)
Estimate: 200-400

For one mad moment I thought I would put in a bid, but it came with a warning that viewing was essential. Now Penrith is a long way from where I live and would mean an overnight stay.  When I zoomed in on the picture I could see considerable damage, so I stopped for a rethink!  What do I want a damaged coverlet for and what would I do with it?  I have too much stuff cluttering my house already!

So I decided to let the Quilters' Guild know about it. They were interested and the Curator viewed it, but they decided against it. They didn't say why, but I am guessing that it was the condition and the cost of restoration that ruled it out.  If that is the reason, I understand, but I'm sad.

There are so many things that intrigue me about this coverlet.  It is difficult to tell from a picture, but the applique certainly looks old, maybe it is early 19th century?  Wellington's Battle of Vittoria commemorated in the panel was in 1813 which would fit, yet the whole thing looks a bit cobbled together! Could it be that the panels were found unfinished and someone decided to make it into a coverlet much later?   It would be nice to examine it for clues!

Since writing the above I have discovered that the coverlet went for £3,500, way above estimate - so much for my idea of a cheeky bid!  As I guessed, the Guild thought that the restoration cost would be very high and decided against bidding.  Its acquistion fund is not huge and unlike a lone buyer, any purchase has to be justified.

We don't know who bought it but it might well pop up on the other side of the pond!  Over to you quilt sleuths - you know who you are!   Track it down and let me know what you think?
Posted by Little Welsh Quilts and other traditions at 14:55:00

Interesting...looking forward to 'the rest of the story'