Baskets have long been an ornamental element in decoration particularly in the 18th century, being found on carvings, embroideries, china etc., eventually finding their way on to quilts both in applique form, then as a quilting pattern and eventually as pieced patterns.

I am working on a basket design at the moment, which I found on an English quilt dated 1799, a time when basket decoration was at it's height.  Then of course there is this quilt, which was all over the Internet a while back - 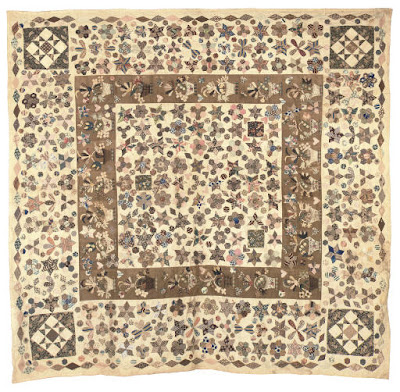 It is now known as the "English Basket Quilt" and I think it is fairly early - around 1800 maybe?  If anyone has more dating information on it I would be very pleased to know? 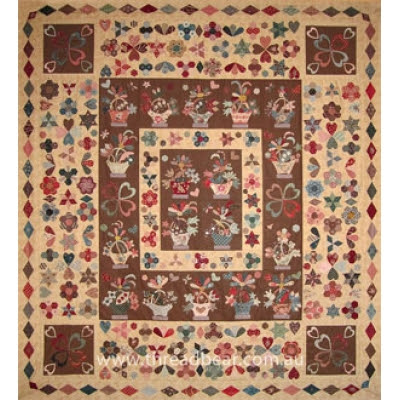 which is being reproduced all over the world, though I suspect not many here in the UK.  We tend to be out of love with hexagons because they used to be considered the only form of patchwork here and many of us have awful unfinished projects tucked away in deep drawers!.

I like this adaptation very much indeed. It concentrates on the baskets and omits the mass of hexagons and stars which dominate the original.  There are so many of them that the border of baskets, which is easily the most attractive aspect of the quilt is almost overlooked. Corliss has put that right and the basket in now centre stage.

However, if I was working this reproduction, I would be greatly tempted to have the corner Ohio/Variable Star blocks of the original.  They look so American don't they and slightly incongruous?  That is why I would include them, because though Corliss's choice of linked hearts is more in keeping and better design, the fact that these patterns were worked on a British quilt around 1800 means that we did them first - along with the Dutch of course!

Posted by Little Welsh Quilts and other traditions at 16:12:00

Email ThisBlogThis!Share to TwitterShare to FacebookShare to Pinterest
Labels: Baskets

I love making hexagons and never tire of them, this year they have been my life saver in the wee small hours when sleep has eluded me. I love Corliss' basket quilt and have had my finger poised over the send button a few times.

Recently a lady showed her version of this quilt which can by seen in a photo at Linda's blog http://quiltsinthebarnaus.blogspot.com/2011/11/inspiration-from-castlemaine-applique.html