My apologies for being absent for so long. I have been away and it has taken a little while to get back to writing, mainly because this post is a special one!

Remember in my last post I mentioned that there were two great happenings that week?  Well after visiting the EB Book Launch at Stoke on the Tuesday, on the Thursday I had an appointment at St. Fagan's, the Welsh National History Museum.  In January I had received a call from the Curator of Textiles telling me about their latest find.  It's an early 19th  century patchwork coverlet which as far as we know hasn't appeared in any publication before, so I am greatly honoured to be the first to make it public and share it here with you.

These pictures were taken and are posted here with the museum's permission and I am so grateful to Elen for contacting me about this patchwork.  She said she knew it was my sort of thing and she was absolutely right about that! 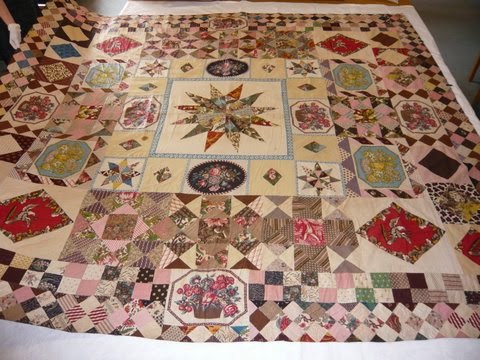 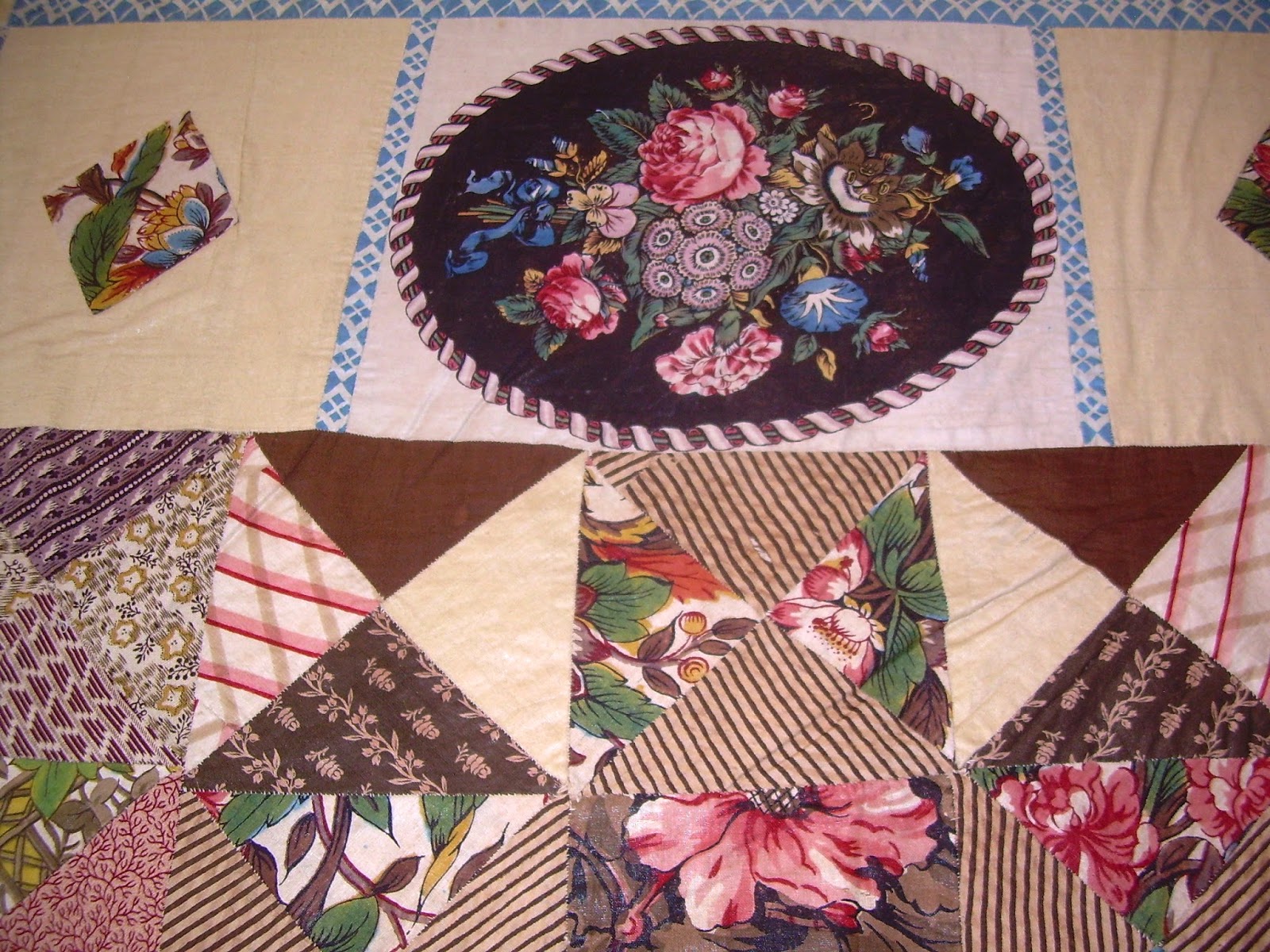 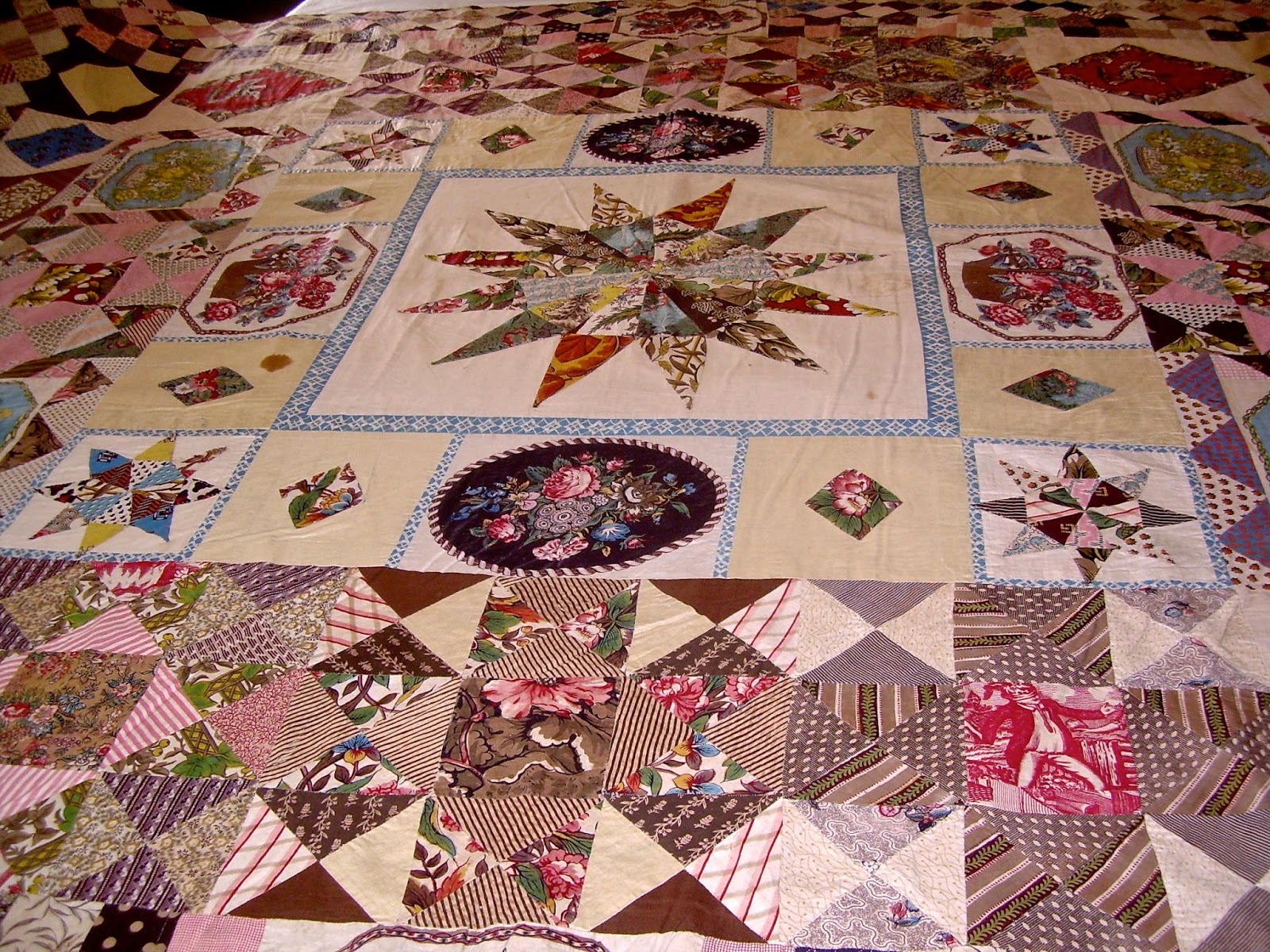 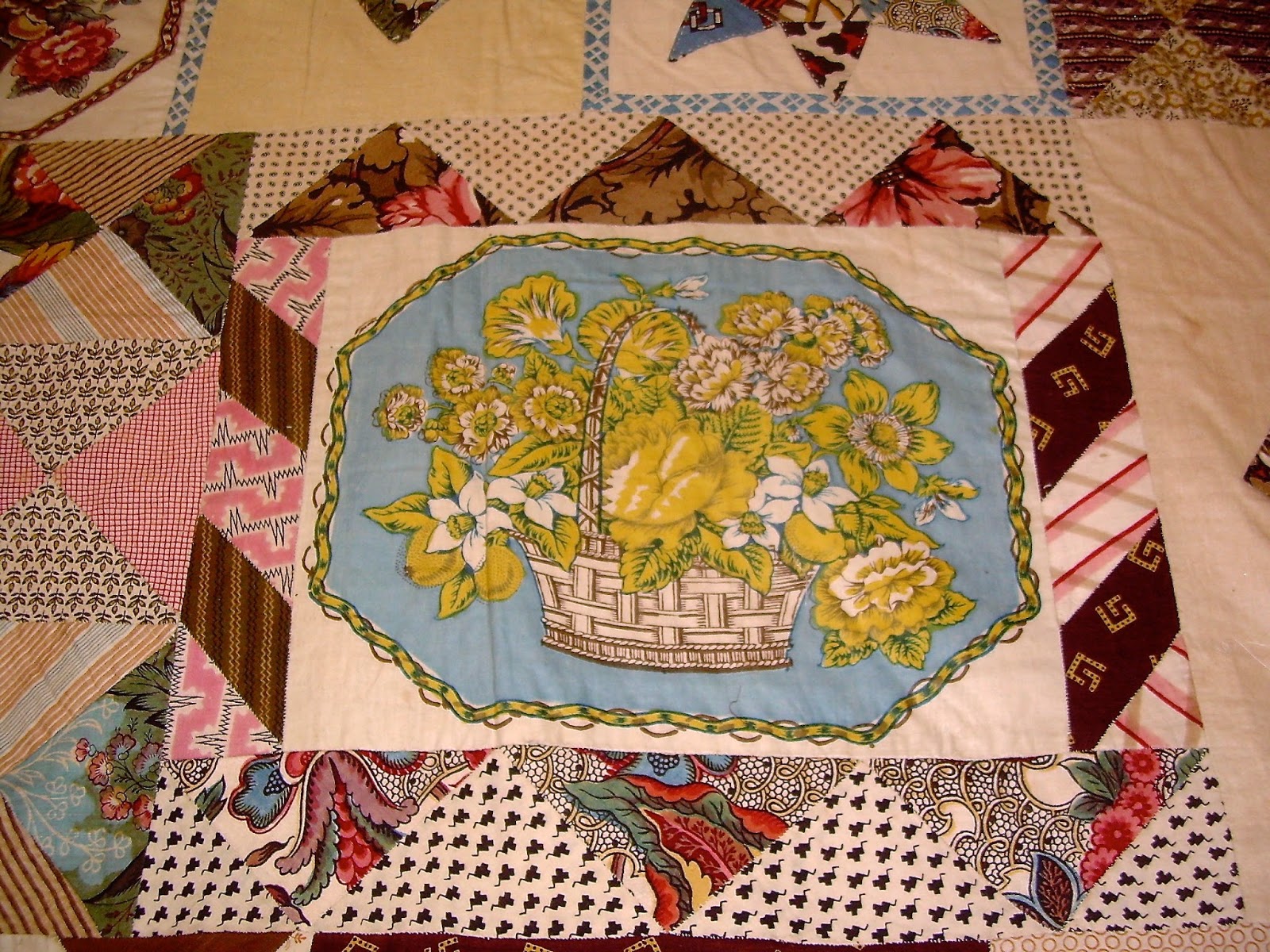 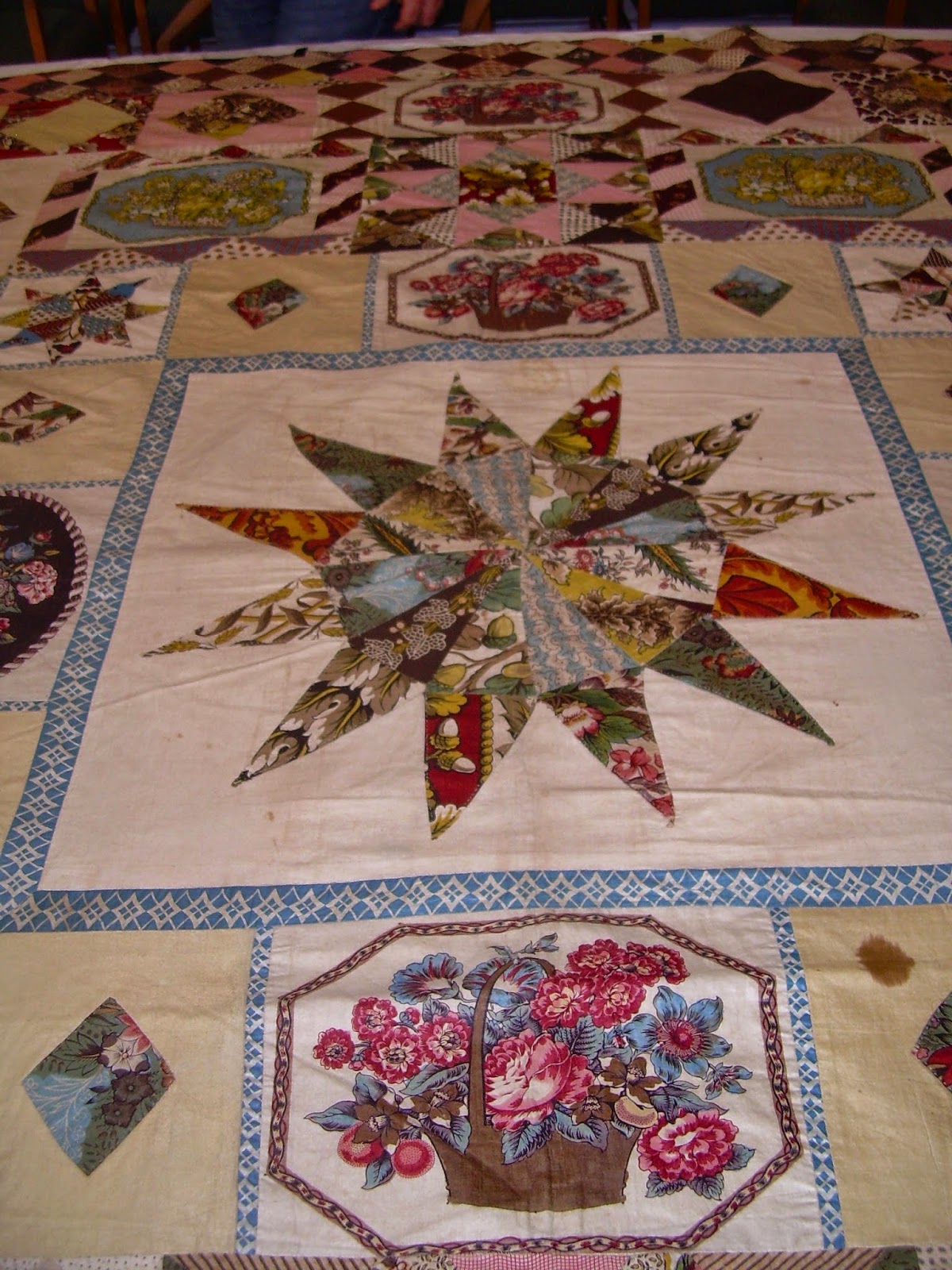 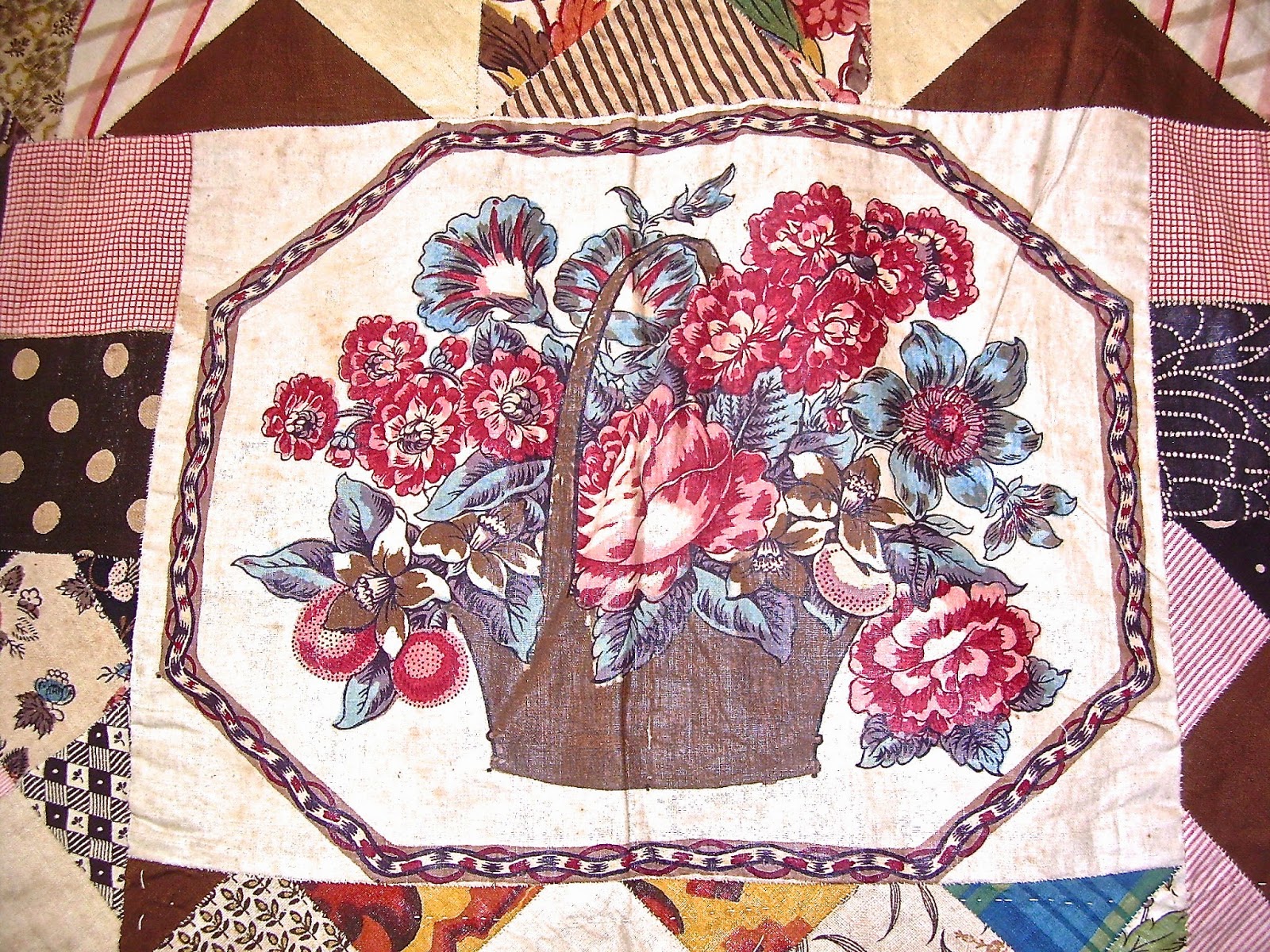 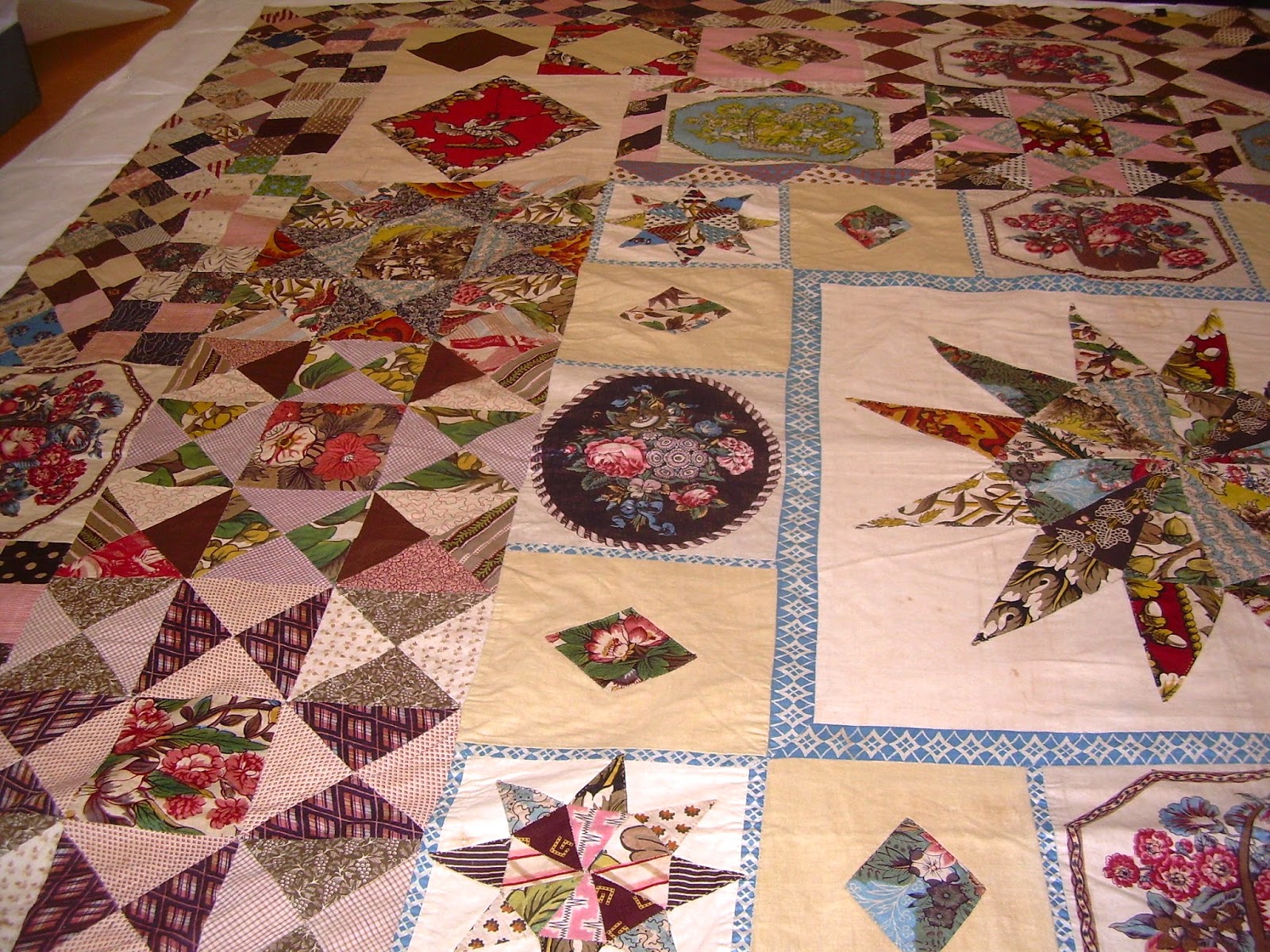 These early 19th century British quilts are much admired by the quilting world and very often copied and adapted by designers with no commercial gain for the original owner, very often a museum who would benefit from some extra revenue.  However, I think that perhaps this coverlet relies not so much on it's design, but on its fabrics, especially the unusual number of printed panels used in its making, which would make it difficult to reproduce.

This post is just a taster as in the next one I am going to show more close-ups of fabrics and talk a little about them and also about how it was sewn.  I will also share with you what we know so far about this patchwork, where it was made and who made it, so watch this space!

Posted by Little Welsh Quilts and other traditions at 09:42:00

ooo how interesting ! lucky you to get first dibs [as it were] can't wait to see your next post and learn all about it.

How wonderful! I can't wait to see more of the fabrics. Thanks for sharing this wonderful piece.

i would love to know how big the quilt is , roughly and some idea of the size of the blocks.
those printed panels are lovely, it makes one wonder if the quilt maker worked in the shop that sold them to have access to so many.
all very interesting.

What a great quilt it is. Can't wait for a closer look of the fabrics.

What a find! The colours are so fresh too.

This quilt is so beautiful! I can't wait to see more!

Thank you for posting this, it is wonderful. Did they find it hidden in their archives or was it something which had just come into their hands?

What an amazing find! The colours are so bright and fresh that it looks as if it could have been made yesterday! Super panels as well and unusual to see so many on one piece. I'm looking forward to hearing more about it. Thank you for sharing with us.

Oh my goodness! Lucky you! Such lovely, lovely fabrics. I can't wait to learn more about it.

Oh wow Mary. I love this quilt. What a honour to see it first hand and introduce it to the blogging community.

What a glorious quilt! the fabrics are magic! thanks so much for showing and look forward to more.
Hilda

How very exciting! I cant believe how fresh and clear the colour of the fabrics. Can't wait for your next post. Thanks for sharing.

Hello, I'm Elen the Curator. We found it in the store - safely stored with our other quilts on a roller. We have approx 120 in the collection - I'm yet to see each one individually. This one has good provenance and has been in the collection since 1962. I'll leave it to Mary to share more in her next post. I'm pleased that you all like it - it's a beauty.

How lucky of you to get to see this in person! What a feast for the eyes these fabrics are. Can't wait to see more.

Since its a coverlet rather than a quilt and there are so many lovely panel prints in it, has the museum thought about doing reproductions of any of these? Something like the Quilt Museum has done with the centre of the Sidmouth quilt? I am sure there would be a market for them, giving the coverlet a chance to earn some funds for the museum too.