British traditions and what we stand for are very much in our minds here in the UK at the moment, so perhaps this is a good time to think aloud about the traditions of patchwork and quilting in this country?

I am a traditional quilter, though I don't belong to the official group within the Quilters' Guild of the British Isles, because when I saw a display of their work at the Festival of Quilts what struck me then was though it certainly was traditional, it was predominantly American block patchwork traditional and reproduction fabrics were used extensively! You may well think that there is nothing wrong with that, as most of us start making blocks, but I was looking for something that celebrated the traditions of patchwork of this country, not that of the USA, which I feel has quite enough coverage already!

Because of our history of trading with the Far East and then our industrialisation of fabric manufacturing, we were a great and original influence in the world of patchwork and quilting.  Our fabrics and traditions of working were carried to the New World and developed there, only to return here as an American invention.  American Block patterns are great, they are practical, they were developed for ease of working in difficult circumstances, they are addictive and they have names, which is a brilliant marketing device in itself!  However, block patterns were used in quilts and coverlets made in this country many decades before they appeared in America.  You have only to study the Sundial Coverlet in the collection of the V&A, dated 1797, to see this? 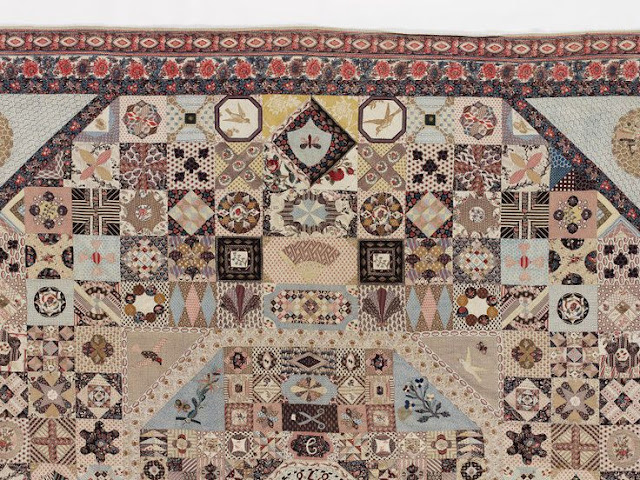 The above picture is of a section of the Sundial Coverlet and  below are some images I have saved for reference.  I apologise for their quality, but think that they are of interest and as inspiration for updating the tradition?  The first two are quilts held by the National Trust and the others are from the Internet.  All display interesting formats and old techniques! 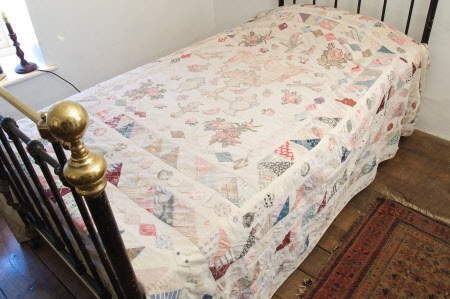 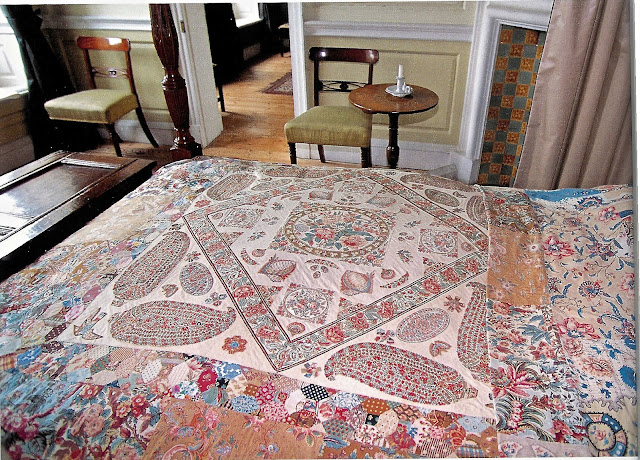 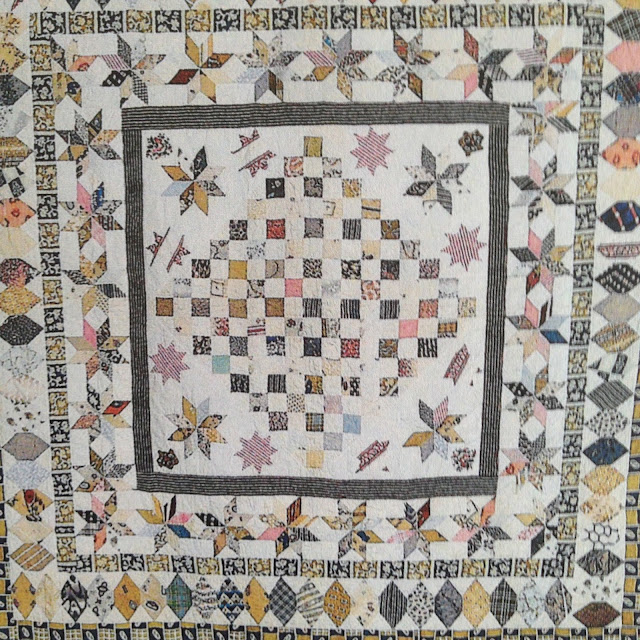 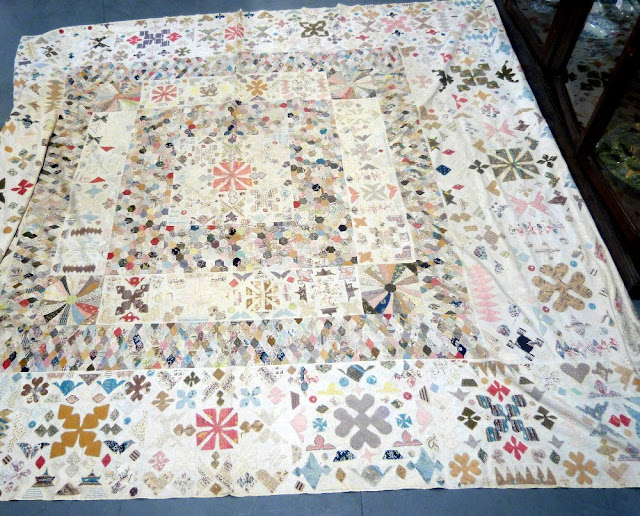 We in Britain of course are surrounded by so much history that we take it for granted - that is a fact which we all know and tend to dismiss.  We used to be the centre of an empire and so have been exposed to influences from all over the world.  We have excellent higher education art and design courses which encourage students to seek new and different ways of doing things and draw inspiration from world wide sources?  Perhaps these are some of the reasons why we neglect our own traditions or consider them not exciting enough?

Then of course there is the problem with books!  Unless traditions are recorded and promoted they die and though we have a very active publishing industry, it is highly commercial and needs to appeal worldwide and in patchwork and quilting terms, that means North America!  Anything British is considered too niche, so authors are encouraged to embrace many different design sources to appeal to the widest market.  Publishers are not interested in promoting their own country's traditions, that isn't considered commercial and they are probably right - they do actually sell more by widening the net, so British traditions are practically ignored, or if some do creep in they tend to fairly simple because again, books tend to be aimed at beginners, because that's the largest market and is also the easiest to cater for!

Now through the Internet it is very easy to follow trends all over the world and I am greatly encouraged to see that other countries, Australia being a prime example, are leading the way in exploring our British traditions.  It is wonderful to see how they are using, for example, English paper piecing, something I really thought had died a death and wasn't mourned by me, and producing the most exciting work in fabrics and colours that would blow the mind of Averil Colby, on whose books they seem to draw much inspiration.
I just wish there was similar original work being carried out here?  Perhaps there is and I am missing it?

Posted by Little Welsh Quilts and other traditions at 16:28:00

Why not join BQSG? Plenty of original research there....

It is a shame there aren't more books about UK quilts. I really like the examples you shared. The lovely florals are what I like best. I hope to make a medallion quilt like those pictured someday. I even have the fabric set aside. I finished another Welsh quilt from your book and thought you'd enjoy seeing it. http://solsticestudio.blogspot.com/2016/06/welsh-quilt-study-ii-completed.html

Gorgeous examples of British quilts - loved the pictures! They are very inspirational in the quilts that I make. I also wish there were more books on British quilts. As a dual citizen - Australian and British - I can't get enough of them!

I love traditional British Quilts too, I have a few books that I have picked up second hand, including an Avril Colby for 50p!

I do belong to BQSG Pippa and read their publications avidly!

I am not talking about research, but making new quilts based on British tradition and I don't mean reproductions! I am more interested in updating traditions, making new quilts inspired by old ones e.g using traditional techniques but with current fabrics that will recognised as of our time in the future!

I'm in love with the 19th century quilts of England and like others, I regret that there are no more books about these beautiful quilts...
Thank you for the photos and for this wonderful post !

Great blog post. It's so hard to find much on British Quilt s other than the usual books or sections of books. I am current!y focusing on whole cloth quilting inspired by our historical traditions (got your book on welsh quilts for my birthday this year!) But like you would like to make patchwork quilts building on our history. Thanks for a thoughtful post.

Dear Mary,
I have recently acquired a sampler that I believe to be a Welsh Folk Art Sampler. Would you please email me at Mehitable1@aol.com so that I can send you a picture? I would love to hear your thoughts on it.
Melinda Cole
Tipp City, Ohio

I have replied Melinda!

Thanks for this post. I can see your point. I'm very much focused on the Australian quilters because, like you mentioned, they do make new quilts using the English old quilts as inspiration. For example Brigitte Giblin, Margaret Sampson George. I hope more English quilters will start doing new things based on their own old quilts.
The coverlet or top in the last picture is beautiful!
Groetjes
Annemieke

Thanks for this post. I can see your point. I'm very much focused on the Australian quilters because, like you mentioned, they do make new quilts using the English old quilts as inspiration. For example Brigitte Giblin, Margaret Sampson George. I hope more English quilters will start doing new things based on their own old quilts.
The coverlet or top in the last picture is beautiful!
Groetjes
Annemieke

I absolutely agree with you Annemieke and I will be blogging about them next!

I have thought so often about this post since I read it pondering why Australian quilters like me are obsessed with paper piecing and English style quilts. My first quilt was paper pieced. The hexagon shapes were quite large and cut by hand from brown paper. My sister started the quilt one school holiday and became bored so I finished it. There were no specialist quilt shops and no supplies. I didn't know how to finish the quilt but my family owned an interior design business and one of the seamstresses put a back on the top so it was really a coverlet. I made a lot of quilts in this way cutting up graph paper into smaller and smaller squares. Now we have perfect laser cut papers and the possibilities of shapes and designs is endless. Over time I've acquired some Australian paper picked coverlet so from the 1940 a 1960 period. Some still have the a paper left in cut from letters, cards and newspapers. None are quilted. I suspect this style of needlework was handed down in families and the art wasn't fashionable but didn't die out.
You are quite right to sat Avril Colby is a huge source of inspiration. I never tire of reading that book. I wish it had better photos but perhaps half the fun is the detective work! Studying those tint black and white photos. Thank you for your wonderful blog. Don't stop showing us these wonderful quilts.

We could do with more quilters who work within British traditions in the QGBI's Traditional Group!

I'm not British and therefore you might argue that I don't know what makes a British Quilt. But I do have a keen interest in the history of British and European quilt making. And one strong theme that I see in British quilts is an interest in the exotic (fabrics traded from India, fabrics made in England that appropriate or copy French trends or Indian chintz). And I see that they have a lot in common with European quilts, e.g. Dutch quilts. I don't know who copied whom. But exploring British traditions and being proud of them doesn't mean insularity. I believe it means celebrating and exploring the fashions and influences that went from Britain to the world and from the world back again to Britain. Don't look inward.

BTW your quilts are great.