I am rather late posting about the Jubilee and as I write, my bunting it blowing wildly in the wind.  The weather has been so bad since Monday when I had my garden party (mercifully on the only dry day ), I haven't been able to take it down as it been raining and blowing non stop. So I'm just showing a few images and commenting on the high and low aspects of the weekend. 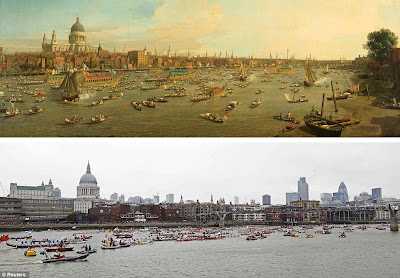 but as you can see didn't look nearly as grand!  However it was a brave effort marred at the end by pouring rain and also the abysmal coverage by the BBC,  for which they have been heavily criticised.  I only wish I had known Sky were covering it, I would have switched.

The Queen and Duke, together with Charles, Camilla, William, Kate and Harry were transported in a boat that closely resembled a floating Chinese Restaurant.  Whoever was responsible for approving the design should be sent straight to the Tower!  It was certainly not British design at its best!

The elaborate and rather garish thrones on this vessel were totally ignored by the Queen and Duke. How amazing is that?  She is 86 and he is 91 and they stood all the time! 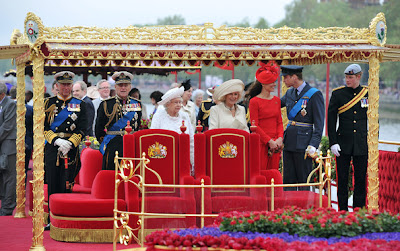 Of course this meant that everyone else had to stand too and towards the end the new Duchess of Cambridge had the "beam me up Scottie" look! 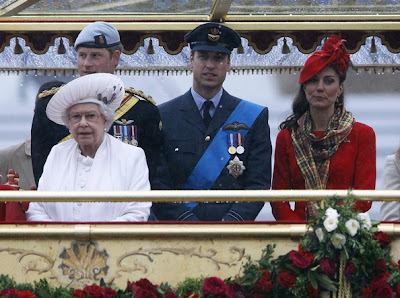 It's not very often you see a bad picture of Kate.  She was probably thinking  - What have I got myself into?.

Monday was mercifully dry with some sunshine and I had friends and neighbours for cake and wine in my Garden Room. The pictures were taken before the guests arrive and before all the food was put out - I had no time to take pictures after that! 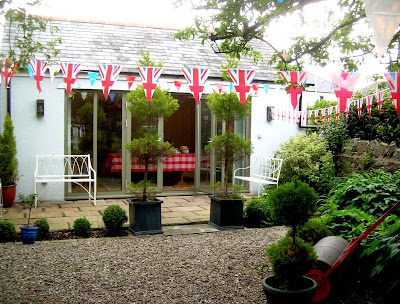 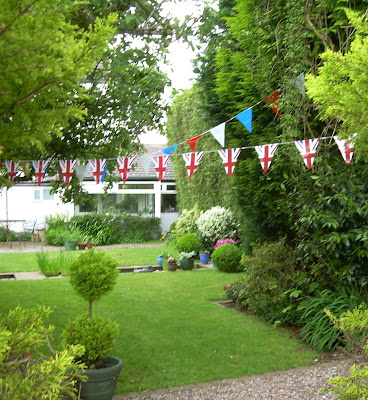 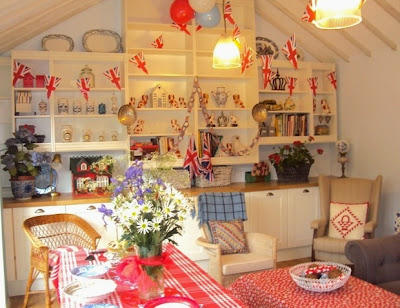 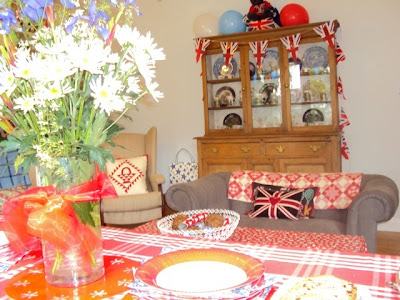 You will also notice that I have lots of empty shelves to fill - don't worry I have plenty of stuff, it's just that I haven't got round to it yet, even though it is a year since it was renovated!

That evening we all watched the Pop Concert centred around the Victoria Memorial with the Palace as the background. I can't say it was my kind of music but I enjoyed seeing it nevertheless and the ending was spectacular with the Palace illuminated and a grand firework display.  Wales was well represented by our Shirl and our Tom, who were splendid as usual, but Renee Fleming and Alfie Boe were more to my taste.

On the last day we had the Thanksgiving Service in St. Paul's Cathedral followed by the carriage ride back to the Palace and the balcony appearance.  I loved the service, it was beautifully thought through with wonderful hymns, the last being Cwm Rhondda with the Choir singing a descant.  Everything truly fitting and fabulous.

Posted by Little Welsh Quilts and other traditions at 20:39:00

Your garden room looks delightful and the royal family did well to stand for so long watching the flotilla in the damp and dingy weather. Kate looked bored.

well done for choosing the one day when the sun shone!! I have to agree about the concert,... its time some of the "stars!!" were put out to grass I feel xx LOVED Alfie Boe of course xx

Your room and decorations are all so lovely. Thanks for sharing pictures of the jubilee. Maybe BBC was amiss in it's coverage but I couldn't find anything on American TV either. So it is nice to hear what you have to say about this celebration. The Queen must have a great deal of stamina as she stood up the whole time during Prince Charles' speech after the concert. I kept thinking, "give that poor woman a chair!"

Well done indeed, I think it grand that you had a party !

You get GREAT points for having space on your shelves... I painted my walls behind the shelves 17 years ago and of course packed every item away so that the shelves could be moved. Put a few things back and within two years the shelves were all FULL and the boxes of shelf stuff still in the garage --- so after all this time this summer I am working my way through the boxes - reading or discarding as the moment strikes me... so on with your shelves.