A link with Wales

I don't know why, because I should be wise to it now, but I am constantly finding links!  It's definitely a small world and we are living in a small very crowded country! What am I on about?  Well I'm sure if you are interested in patchwork you will have heard of the Brereton Bed Hanging?  No!  Well here's a picture - 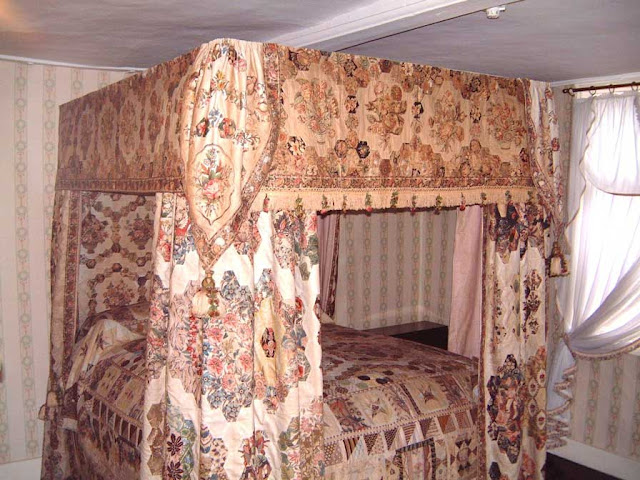 This is the best image I can find, though I do have  a Japanese magazine with more detailed pictures, but it should give you a good idea of the sumptuousness and detail of these patchwork bed hangings and coverlet.

They were made between 1801 and 1805 by Anna Margaretta Brereton of Brinton Hall near Melton Constable in Norfork and remained in her family until they were donated to Strangers' Hall Museum in Norwich in 1929.

These wonderful pieces are typical of the work produced around that time by the ladies of the gentry and land owning classes.  So very different from my favourite Welsh quilts - like chalk and cheese really!  However their maker didn't come from England but from Wales.  Her name before her marriage was Anna Margaretta Lloyd and her father was David Lloyd of Llanvaughan in Cardiganshire.  This is an engraving of their home - 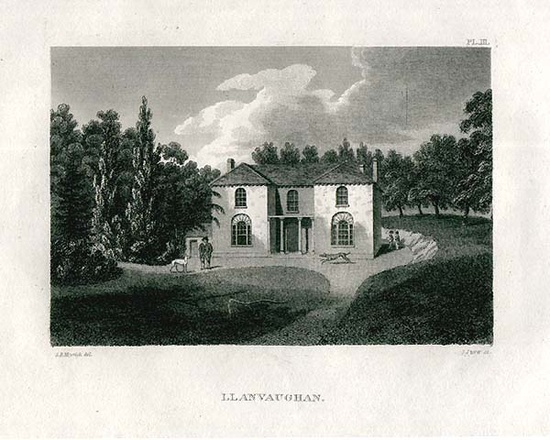 Llanvaughan, the name of her father's estate, is only 6 miles from Lampeter, now the home of The Welsh Quilt Centre.

Anna Margaretta's mother was a Berereton from Norfolk and AM married a cousin and travelled across country to the family seat.  Norfolk feels a very long from Wales now - you have to negotiate Milton Keynes with it's 22 roundabouts to get there for a start - but around 1800 is must have been a good bit tougher getting there!  She probably never saw Wales again.

The story is rather sad and you can read about it here, but it does have a reasonably happy ending!

This coverlet and bed hangings were made in England but similar things were made in Wales by upper class ladies.  They are worlds apart from what the poorer classes were making and illustrate very clearly how different life was if you were born wealthy and married well.  Ladies didn't quilt, they made fine patchwork.  Quilting was for their servants or paid seamstresses. The patchwork they made was for show not for warmth, but both types have equal merit in my eyes.

I hope you find this link interesting?


Posted by Little Welsh Quilts and other traditions at 17:19:00

Hello Mary, Thanks for this interesting post. I was lucky enough to see the complete hangings when they were on display in Strangers Hall and also more recently some parts when they were at a talk by Carolyn Ferguson who has researched the hangings and the family. She also wrote an article for ' Miscellany' the magazine for The Costume and Textile Society here http://www.ctacostume.org.uk/Miscellany.html- just click on the 2012 issue. Hope you find this interesting. Liz.

Hi Mary. A friend of mine recently visited the museum in Norwich in a study tour
Here is the link http://australianquiltstudygroups.blogspot.com.au/2013/03/report-on-lyn-dennis-talk-to-qsg-of-nsw.html
It is a small world!

Oh thank you for sharing. I had heard of the Berereton bed quilts, but had no idea what they were. My GGgma was from Wales, so always gets my attention when I hear little snippets of info.
Smiles,
JoeyLea
http://www.thelocustblossom.blogspot.com/

An amazing thing of such beauty to come out of tragedy. A labour of love and to think it has survived to this day in such good condition. Thank you for this post.

Hi, Mary. Always a pleasure to stop by here. This post (and link) was so interesting. And the bed hangings and coverlet are phenomenal work. I also enjoyed seeing your "liberated" quilt in the previous post. Refreshing!
best, nadia