As you might guess from the previous post, I love folk art quilts and one of the best is a wonderful Welsh cow quilt in Ron Simpson's collection.  It has been featured in many books - QUILTS OF THE BRITISH ISLES by JANET RAE being one (this can be found on Amazon and lots of other websites, the quilt is on page 117).  The quilt was made around 1900 and its main feature is its central needlepoint panel of cow which is surrounded by wool pieces outlined in what looks like herringbone stitch. The name May Bowen is embroidered on the central panel, presumably the maker?  She has quilted it in a rather strange diamond infill pattern which I haven't seen before.

A few of us had talked about doing our own version, but where to start?  What inspired me was finding the Laura Ashley tomato red trellis fabric on eBay which is close to the colour of the original.  I charted my own cow, which I based on a Staffordshire Cow Creamer, as I think this was the probable source of the pattern. To achieve the size I wanted,  I worked it on Aida with Appleton's Crewel wool as then it can be washed.. 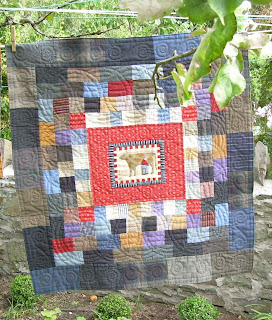 As I don't do large quilts, mine is much smaller than the original and I used a mixture of fabrics from my stash, vintage Laura Ashley, ticking, shirting (I buy men's shirts on sale and cut them up) some Oakshott plains and last but not least Japanese woven fabrics as these are made in all the sludgy and taupy colours seen in old Welsh quilts.  I did some Welsh quilting patterning all over it except for the cow panel which I outline quilted.  I embroidered my grandmother's name Mary Evans instead of the original.  This makes it more personal to me and it's not a replica but my take on an old quilt.  It was great fun to do and I used up lots of bits but not nearly enough!

If any of you would like to to try herringbone stitch, which I use a lot, I have put a link to a demo video.  It is so easy and quite quick to work once you get into the swing of it and here in GB it was a traditional way to applique, for example attaching embroidery slips and doing broiderie perse.

Using up fabric- tell me about it- I recently made a scrap quilt- I think the box had more scraps in when I finished than when I started!
That is very interesting about the herringbone stitch I had know idea of how it was used.
If you ever see anything quilted with the name Bevan on it please let me know. It is my mother family name- they were from Merthyr Tydfil- Another part of the family was PYER - They emigrated from Wales to Pennsylvania in 1880.

Hi Sue, Yes it's difficult using scraps, just when I think I have reached the end of a certain fabric, up it pops again.

I will keep an eye open for Bevan, now that you have mentioned it maybe something will turn up.

My family name Wade is connected to Pennsylvania too, as Wades were among the first settlers there. I should follow it up but you know how it is, it would eat into quilting time!

I love this quilt - how big is it?

It's approximately 32 inches square, a little pulled in by the quilting which is normal. I am at the moment working on one with a cat in the middle - watch this space!

Beautiful quilts! I will come back to have a proper read when I'll have more time:)

A lovely quilt. I may now has a use for those sludgy Japanese fabrics I bought on impulse!

You have a nice blog. Thank you for commenting on mine regarding Lady Montagu.

Isn't it funny how one fabric can motivate to create something. This is a wonderful project on so many levels. Your quilting is amazing.

Thank you Marcie. My quilting is OK but I call it 'organic', it isn't planned in advance. I make decisions and mark the quilt as I progress.

I love your version of the quilt.
Isn't it great to be inspired by antique quilts?
great quilting love the movement it makes on the quilt...beautiful
Kathie