This is the time of year for Open Doors days when the public have a chance to visit places that they would not normally be able to see.  It operates all over the UK and here in Wales I had a chance to visit the farmhouse complex that the Prince of Wales owns near Llandovery in Carmarthenshire.

I had seen the press coverage and knew that the Prince had a collection of Welsh quilts and blankets and had also heard that he liked Welsh quilts very much and wanted more! 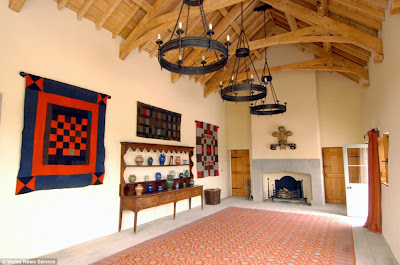 (Well who doesn't - he will have to get in the queue!)   So it was great anticipation that my friend, Pauline, and I drove there on what was one of the rainiest days we have had for a while.  The heavens opened as we arrived in Llandovery and then again as we arrived at the farmhouse.  It is extremely well hidden down one of the worst farm tracks I have ever driven.  It was so bad that I assumed that HRH always used the helicopter but apparently he rarely does, as he is conscious of his carbon footprint and also doesn't want to disturb the neighbours or alarm the wildlife. He usually drives himself apparently and comes there quite often because of its beauty and remoteness.

Well what was it like?  It was wonderful - a farmstead with thatched barns, a very pretty garden where the  farmyard would once have been, surrounded by three cottages, function suite and the private apartments - the farmhouse itself.  It was decorated and fitted out beautifully under the direction of Annabel Elliot, who is Camilla's sister.  She has done a wonderful job, it is both subtle and luxurious.  I would move in tomorrow if it weren't for that track!

If you would like to see more, it is a bit out of date because the garden has happened since, this is the link -
http://news.bbc.co.uk/1/hi/wales/7470135.stm
Posted by Little Welsh Quilts and other traditions at 16:38:00

Email ThisBlogThis!Share to TwitterShare to FacebookShare to Pinterest
Labels: Prince of Wales and quilts

Mary, I would love to know more about how you can visit HRH home. Do you have to apply for tickets before the open day.

The person organising the tours in Wales knew of my interest in the Prince's Welsh quilts and asked me if I would like an opportunity to visit - well I couldn't say no!