One of my friends was intrigued by a postcard of a patchwork coverlet which was in the collection at St. Fagans: National History Museum, near Cardiff.  I wasn't similarly smitten as I thought it looked rather chaotic and badly designed.  Nevertheless I asked Elen Phillips, the Keeper of the quilts at the museum, if we could see it if an opportunity arose. 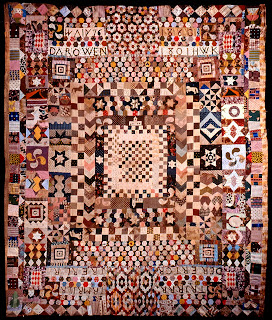 One day I received the call!   Sue Prichard from the Victoria & Albert Museum was visiting St. Fagan's to choose suitable items for last year's Quilts 1700 - 2010.  She was looking for quilts with provenance and the Darowen Coverlet had been taken out of storage for her consideration. 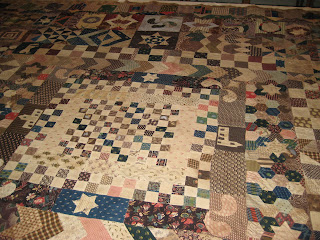 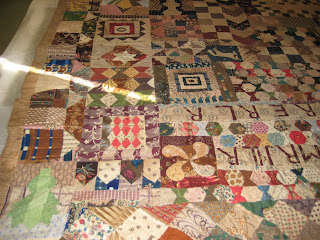 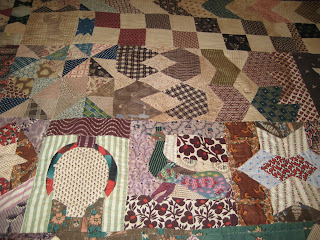 Sadly it didn't make the cut, which I think was a great shame because it certainly has provenance.  I was totally captivated and decided to do some research which is now filed at the museum and was subsequently published in "The Quilter" (the magazine of the Quilters' Guild of the British Isles).

It was made by three sisters, the unmarried daughters of the Vicar of Darowen, a village in what was then Montgomery in Mid Wales.  I believe it was made over a long period as it seems to chart the family's history in the village  Their arrival in Darowen in 1801 (which is the first date on the coverlet) to the death in 1877 of Mary Richards, the eldest daughter and as both grandchildren had died young, the last survivor of a family of eight children.  This unique unquilted coverlet then passed to distant relations before being given to the museum.

Surrounding the squares in the centre of the coverlet are church images and I believe these commemorate the demolition of a medieval church and the building of a new church in 1863.  Perhaps this momentous occasion was the inspiration for the coverlet and the sisters then decided to add dates, initials and other images that were significant to their family?

What a good idea that is!   Would it inspire you to begin a family record quilt?

The photographs are published with the kind permission of St Fagans: National History Museum.
Posted by Little Welsh Quilts and other traditions at 08:29:00

Thank you for showing us this coverlet, I like it a lot. It does put me in mind of a lot of the 'contemporary' or 'liberated' quilting that is happening at the moment which just goes to prove that there is nothing new under the sun.
Deborah

Hello Mary, Thank you for showing this coverlet The time scale is so interesting from start to finish. It is a shame that more of these quilts that are held in small museums around the country didn't make it to the V&A. I would have been far more interested to see these than the contemporary ones that were chosen for the V&A Exhibition .

Thanks for showing the coverlet and telling the history. I love quilts that mean more than just piecing and sleeping under. I have a question about the little quilts in your book. Do you quilt from the top or the bottom? It would seem easier to mark it on the solid back and quilt from there but I wasn't sure. I get the impression that the originals were marked on the pieced side......... And, if that is the case, I respect these quilters even more.

Hi Robin, As I feel that the patchwork boundaries have to be considered when deciding on the quiling design, I mark and quilt the main outlines of my quilting motifs on the patchwork side. The filling and outlining and all subsiduary patterning can be done on the plain side. Therefore I actually quilt on both sides. This is made easier because I don't use a frame

Thanks, I never considered quilting from both sides. That has opened up a whole new world of freedom and ideas.

I never considered it either, what an interesting approach. So your quilting on the back looks pretty much the same as your quilting on the front? My quilting is picking up a lot with practice, but the back still doesn't look like the front, and I think won't while I use rocking stitch. When I finally get around to learning machine quilting, I might try it then, as marking up a top is always such a pain. I have been ridiculously excited recently about using Crayola washable markers for quilt-marking!

The big random quilt is quite something, isn't it. It's lovely when you get a family making something together like that. I can't even begin to think about doing a modern equivalent: I'm the only quilter in my family (my late, much-married grandmother was into pretty much every other craft going, though), and we're not fixed in one small community in the same way either. Plus it's a different style of quilting, perhaps journal quilting would be a modern equivalent?

Could I be a total pest and ask your opinion on how to quilt a top I am very much stuck on? It's not Welsh, in fact it's an art quilt showing a nautilus shell, but you're one of the people who truly inspire me with quilting designs and even the abstract/modern ones can be closely related to traditional quilting. It's at http://lobsterdesigns.dreamwidth.org/12597.html.

Hi Lobster Designs. I tried to comment on your site but kept going around in circles so will give a few suggestions here -

I love your quilt.

I agree with Aunty D, waves are the way to go. I think that you really have to follow the central spiral and then into larger curves within the shell. The background diagonals can then be quilted with waves but vary them in size not keeping within the patchwork diagonals.

It's a tricky one!

I love looking at quilts like this, you always see something new every time you look at it.
What a history of time in their lives I am sure is in this quilt. I wish there was a diary that went along with this quilt so we knew more.
I would love to make a quilt like this.
how lucky you were to be able to study this quilt
what blocks did you find most interesting?
What was your favorite fabric in the quilt???
thanks for sharing I always love visiting your blog
Kathie

Hi Kathie,
In the bottom left-hand corner of the third picture is a bright green Welsh leek. At the bottom of the last picture there is an anvil and horseshoe and a peacock. I love all of these. There is also a Welsh harp somewhere but I don't think I've shown a picture of that. All these images meant something to the girls. Mary Richards played the Welsh harp!

Hi Mary,
The closeup views of the quilt were interesting. I was surprised to see that lots of the work that I would have assumed to be pieced were actually appliqued. I have seen on some old American quilts too. On the first photo I saw that the chevrons surrounding the center of the quilt were overlapped instead of seamed, so I looked more carefully at the rest of the quilt. Thanks so much for the insight.

what a treasure, glad you got to visit it with it and add to its history.
Too bad it didn't make the cut.
Thanks for sharing.

I love this quilt - totally wonderful and I love that chaos. oh, and the history and the placename on there. Loved your photos in particular - the colors are great.