This lovely red and white quilt which is now on exhibition at the Jen Jones Quilt Centre is product of  American and Welsh quilting influences. 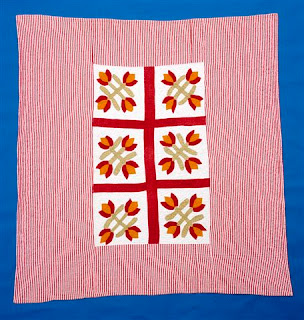 It belonged to Jennie Rambridge of Merthyr Tydfil whose relatives emigrated to Pennsylvania at the end of the 19th century, the men to work in the coal mines. One of them, Jennie's Aunt Martha, who had married a James Treageo of Gilberton, Pennsylvania, is thought to have made this quilt which was brought back to Merthyr as a gift for Jennie.  The quilting is Welsh but the block pattern is American - a true blending of quilting cultures?

The Welsh were among the first to settle in Pennsylvania. They arrived in two waves, the first at the end of the 17th century when they were fleeing religious persecution and then a second wave in the 19th century when many left Wales in search of work in the coal fields of  Pennsylvania.

The first wave settled and integrated and had quite a lot of  influence in their new country.  Eleven early Presidents had Welsh antecedents, including John Adams the second President, whose family came from Pembroke (my family territory).  The second wave weren't as influential and though many settled permanently, others returned home because there was by that time plenty of work in Wales. The above quilt fits into the second wave.

Sadly the Welsh connection with the USA seems to get overlooked and it is the Scottish and Irish influence that is celebrated.  My theory is that it was probably because they were a sober lot and didn't party like the Scots and Irish?  Singing hymns, though wonderfully uplifting, can't really compare to Scottish and Irish celebrations!

Thank you Jen for allowing me to use this picture of your quilt and to Hazel for sending it!
Posted by Little Welsh Quilts and other traditions at 08:25:00

Email ThisBlogThis!Share to TwitterShare to FacebookShare to Pinterest
Labels: Wales/Pennsylvania

I had welsh ancestor's leave Merthyr Tydfil for PA in 1881.
They lived in a mining town called Johnstown during the great flood when many lost their lives.
How I wish someone of mine had bought a quilt back.

Hehehe those Welsh connections. Lovely to see this one - striking and unusual.