Who do you think this is?

You are probably aware by now that I love portraits and if they have a mystery attached to them, all the better and if the BBC are doing a documentary exploring that mystery, that's my kind of programme!

Well who do you think this is - 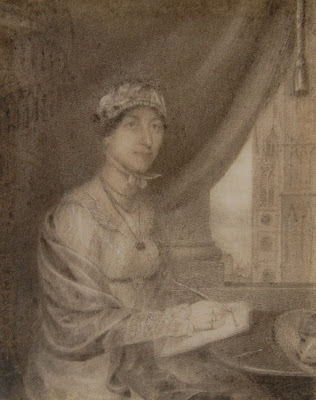 I know that many of you reading this are fans so prepare to be amazed  - it is said to be a recently discovered portrait of Jane Austen?

On Monday it was all over the British media starting with the "Today" program on Radio 4 and picked up by the national newspapers who are of course sceptical and think that it maybe the owner has an ulterior motive.

For Dr Paula Byrne who owns it is a well known biographer and Austen scholar, who is presently writing a new biography of Jane to be published in 2013 on the 200th anniversary of "Pride and Prejudice"  She is convinced it is Jane and said that as soon as she saw it she recognised it as the real Jane as she had never really been convinced by the only other portrait done by Jane's sister Cassandra, after Jane's death. 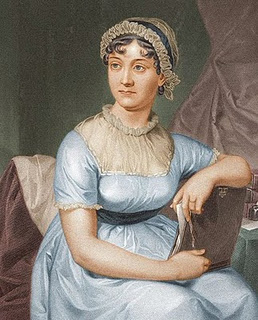 The portrait drawing, in graphite on vellum, had been in a private collection for years, and was being auctioned as an "imaginary portrait" of Austen, with "Miss Jane Austin" written on the back.  Dr Byrne said  -

"When my husband bought it he thought it was a reasonable portrait of a nice lady writer, but I instantly had a visceral reaction to it. I thought it looks like her family. I recognised the Austen nose, to be honest, I thought it was so striking, so familiar. The idea that it was an imaginary portrait – that seemed to me to be a crazy theory. That genre doesn't exist, and this looks too specific, too like the rest of her family, to have been drawn from imagination."

If you would like to compare the likeness to the rest of her family do visit Austenonly which does a really wonderful job for all of us Jane Austen fans.

Well I for one am looking forward to the programme which is going out on 26th December, a little treat for Boxing Day!  Sorry to those of you not in the UK but if you are interested you could watch it on-line on the BBC website?

Another piece of information re Jane is that Professor Amanda Vickery,  who did that wonderful series "At Home with the Georgians" has a programme coming out on 23rd December entitled "The Many Lovers of Jane Austen".  This is a deliberately provocative title, but then sexing up everything is what the media do now, they even try it on Jane Austen!

It looks like being a Jane Austen Christmas - yippee!

Posted by Little Welsh Quilts and other traditions at 08:44:00

Quilt it and Dotty www.quilt-it.nl said...

Jumping up and down here! What a discovery, and I am sure going to watch the BBC here. I watch it every morning; the breakfastshow and every evening too. The children even complain about me watching the BBC all the time....

Unfortunately, those of us in the US can't watch the BBC videos on their website. I tried to watch one about the Cosmati floor at Westminster and was denied access. Sigh. I wish the BBC America TV channel would show more of the BBC culture shows.

Hi Barbara, Yes culture shows have a low priory even with the BBC these days. It seems to be endless Masterchef and baking programmes here at the moment.

You can watch live on the BBC website, but of course that mightn't be convenient because of the time differences.

Great story. I am sharing it with my readers too. Thank you.