Sorry it has taken so long to keep my promise of more pictures of the early 19th century bedspread which I posted a little while ago.  I was hoping to have done a bit more research, but sadly I have been caught up in other things.  However, I will tell you what I know.

I was wrong calling it a coverlet.  It has been described as a bedspread and though it has some outline quilting, which you can see in some of the close-ups, it looks like just two layers, so not a quilt?

As these pictures came from several sources, there are some repeats of certain interesting bits, but I thought I would include them as they show different surrounding fabrics. 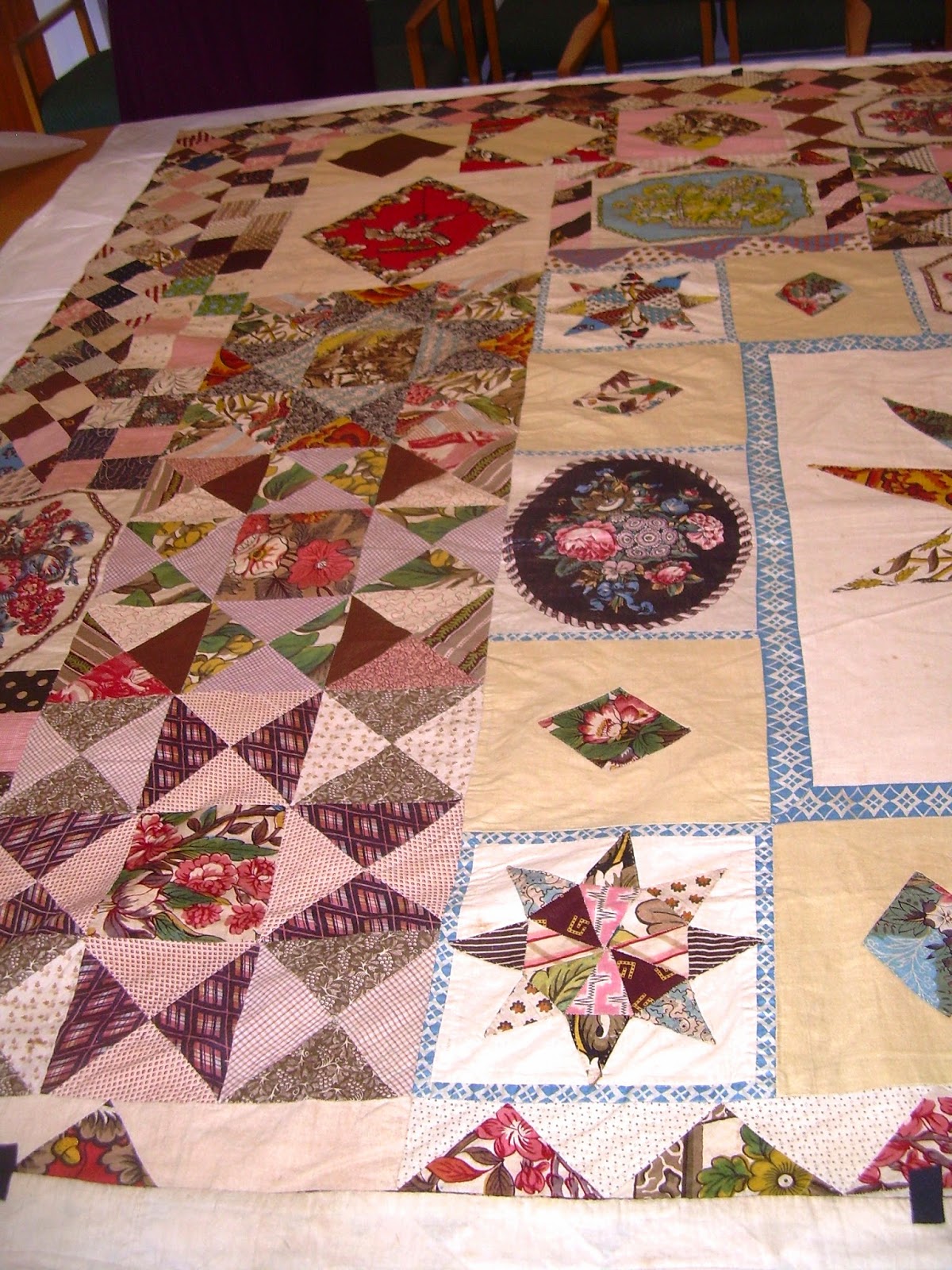 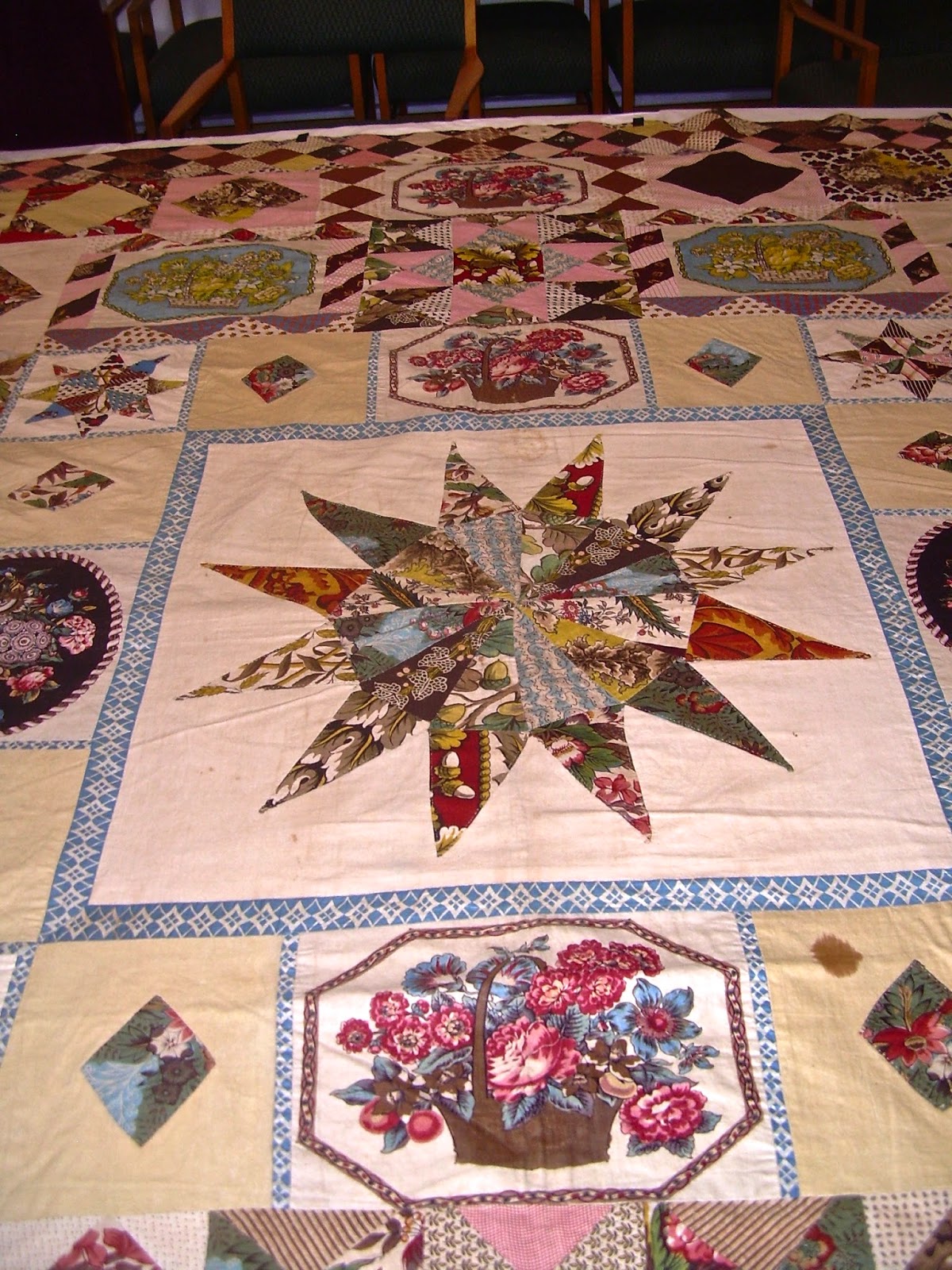 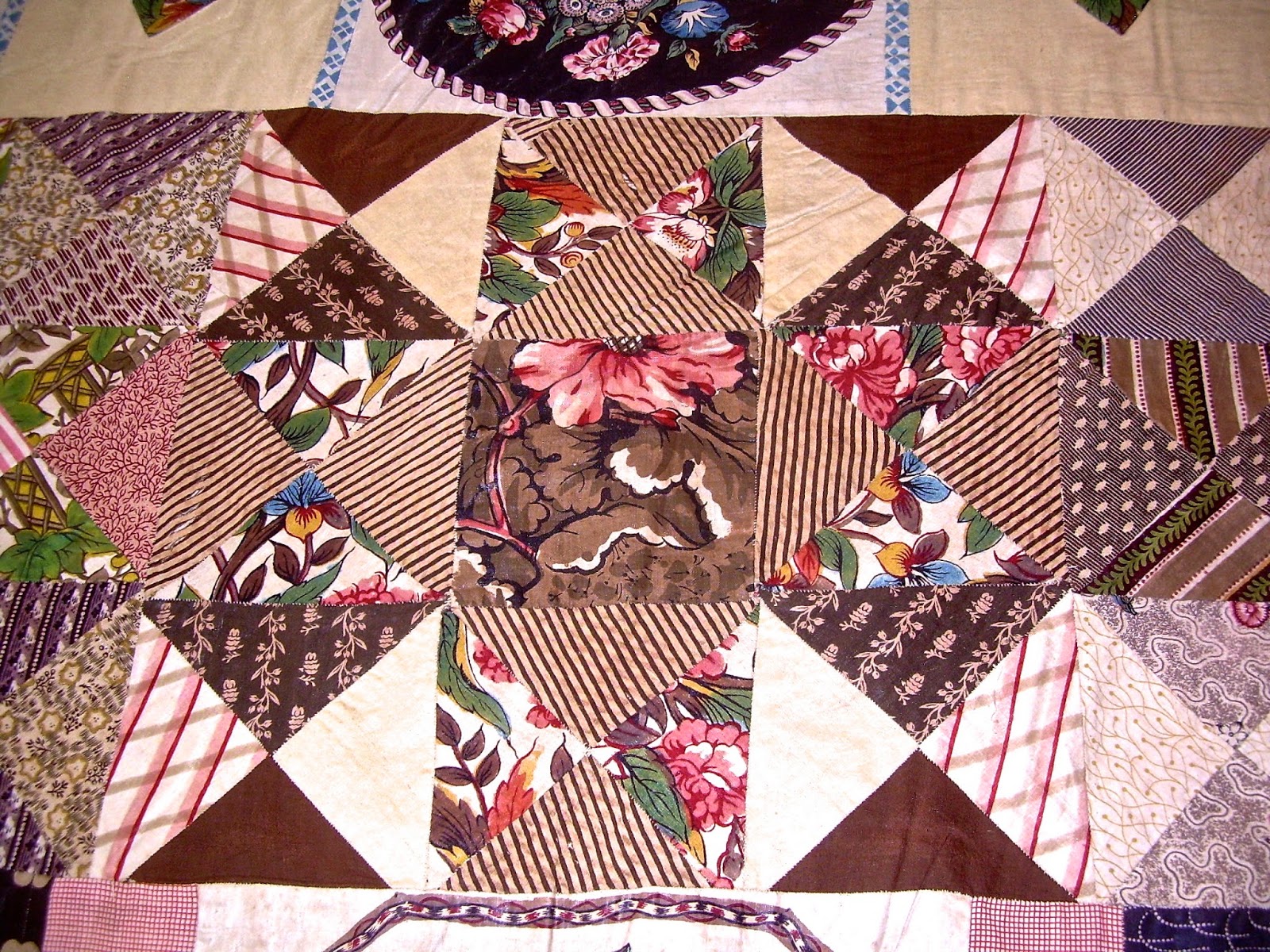 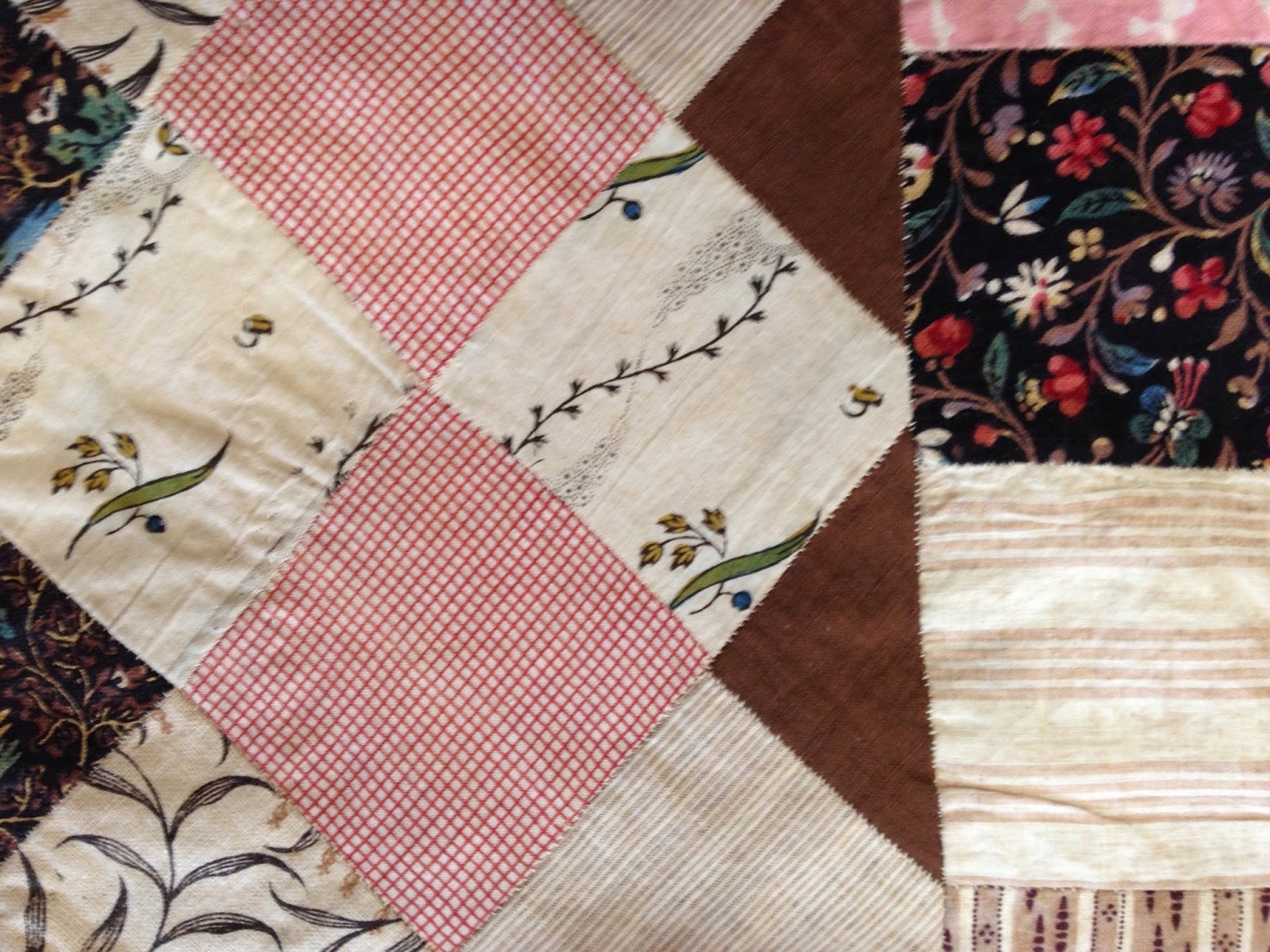 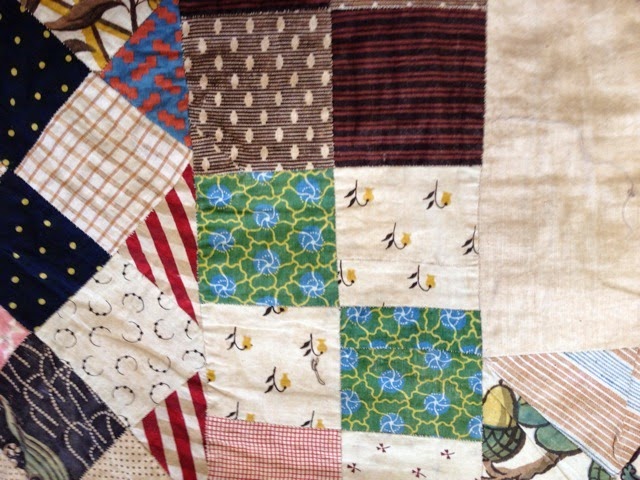 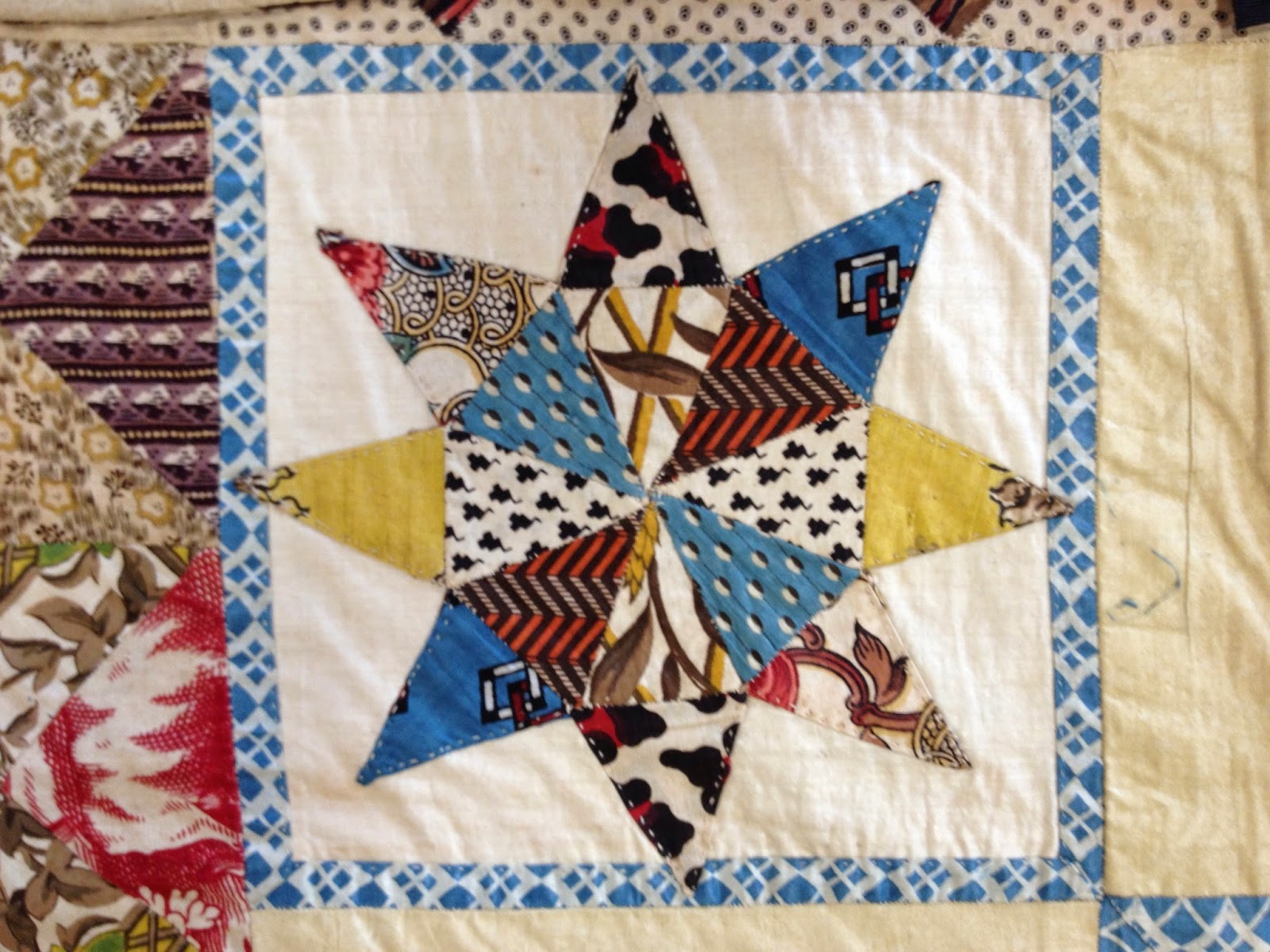 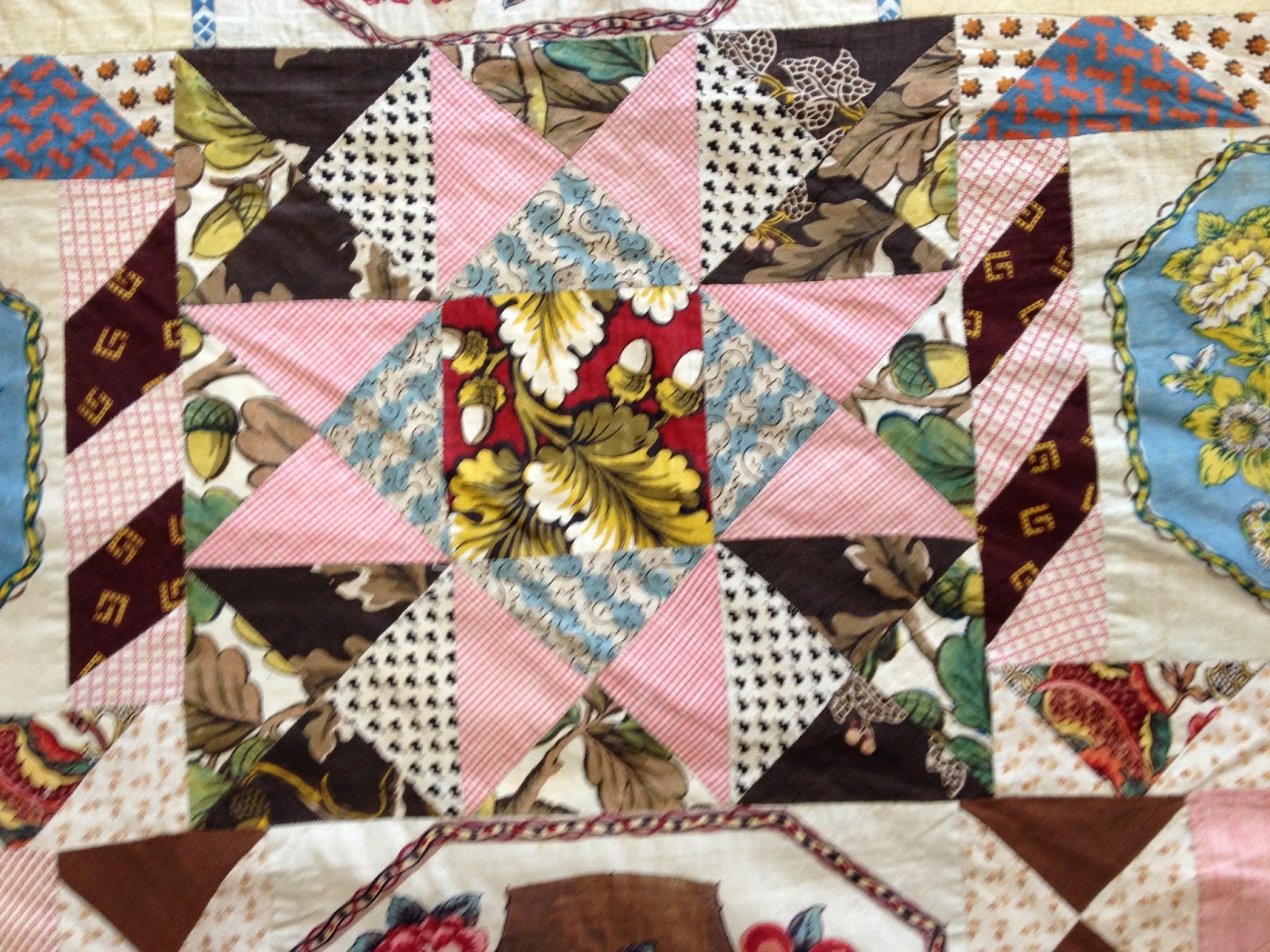 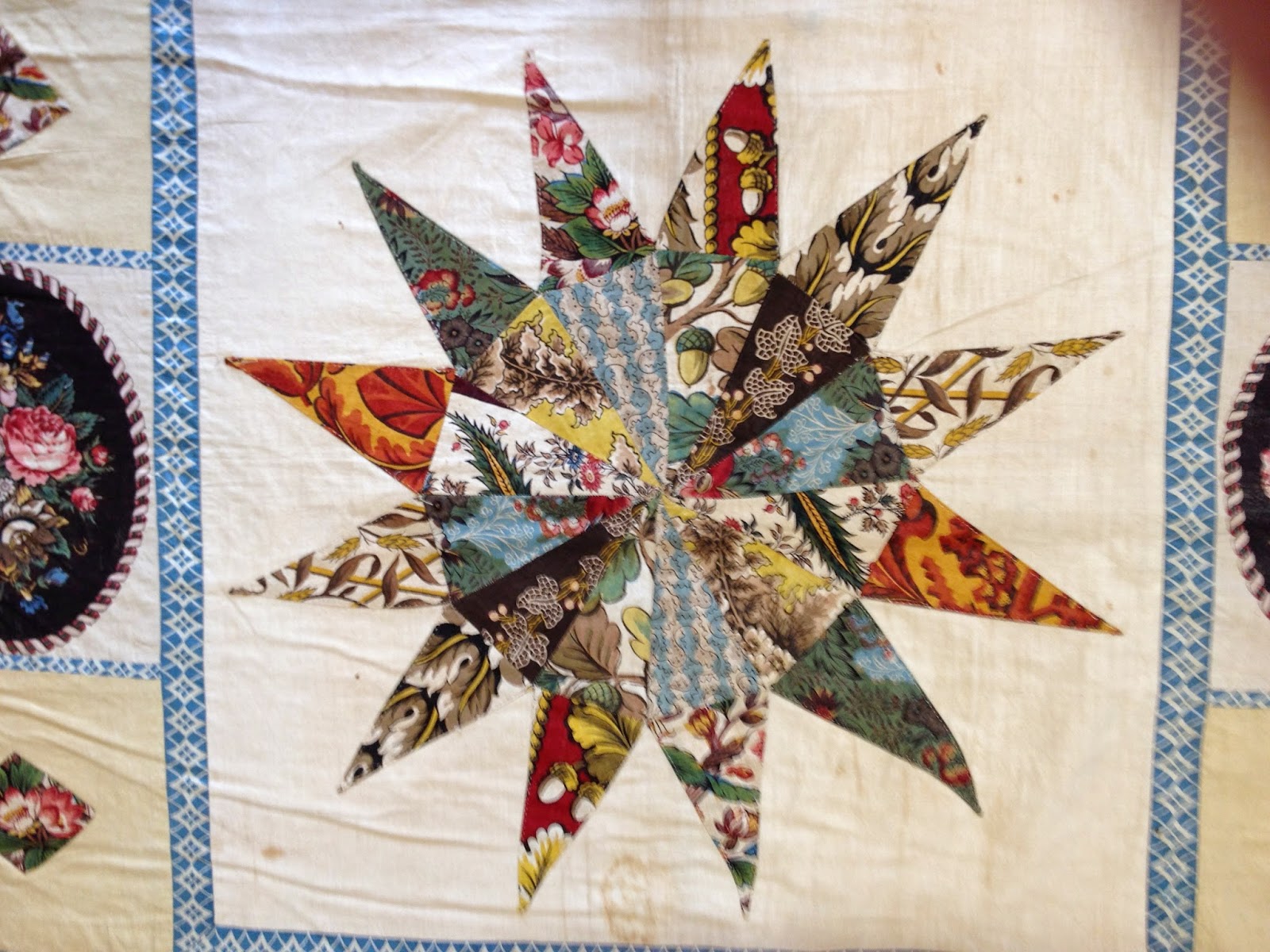 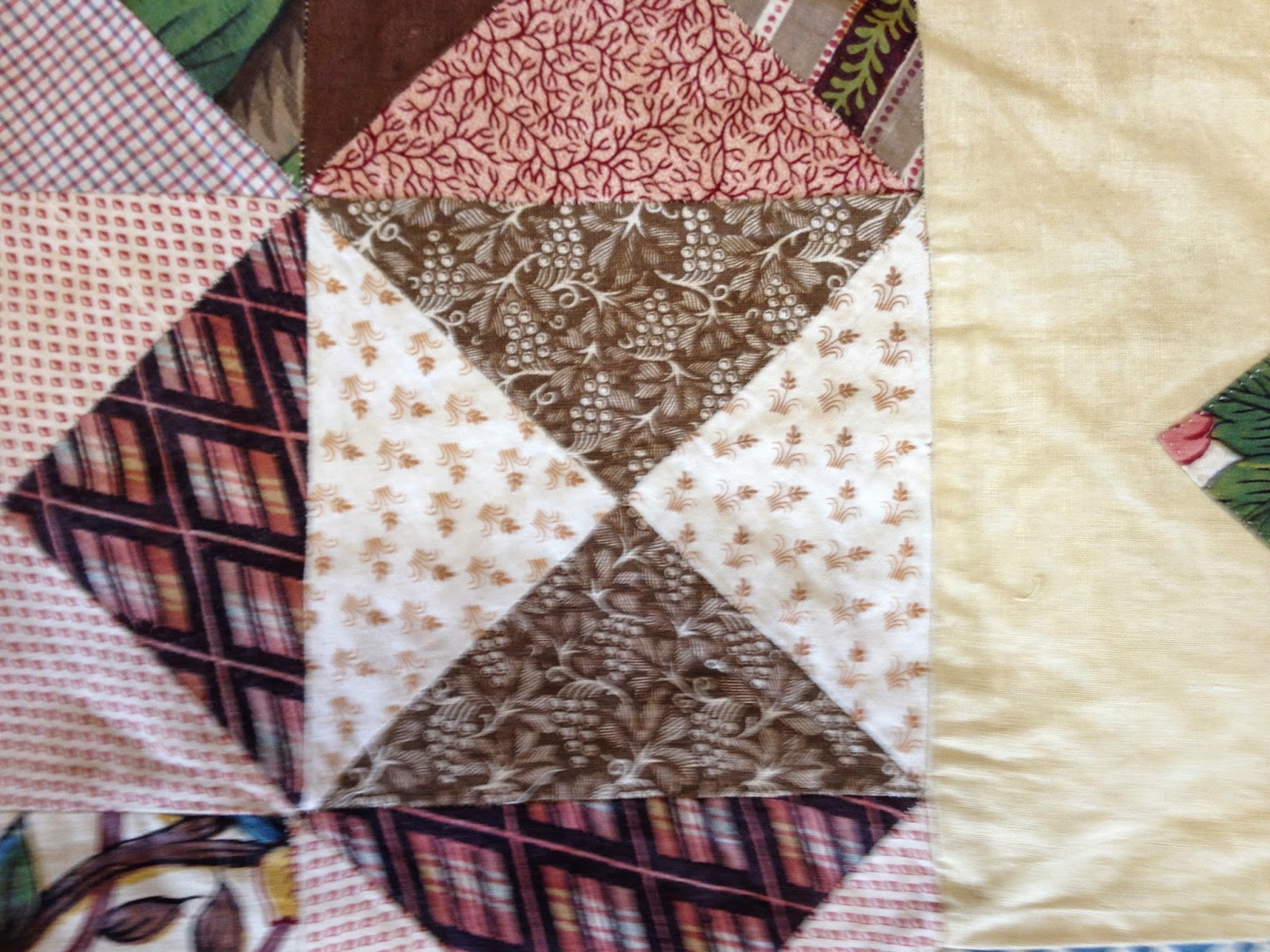 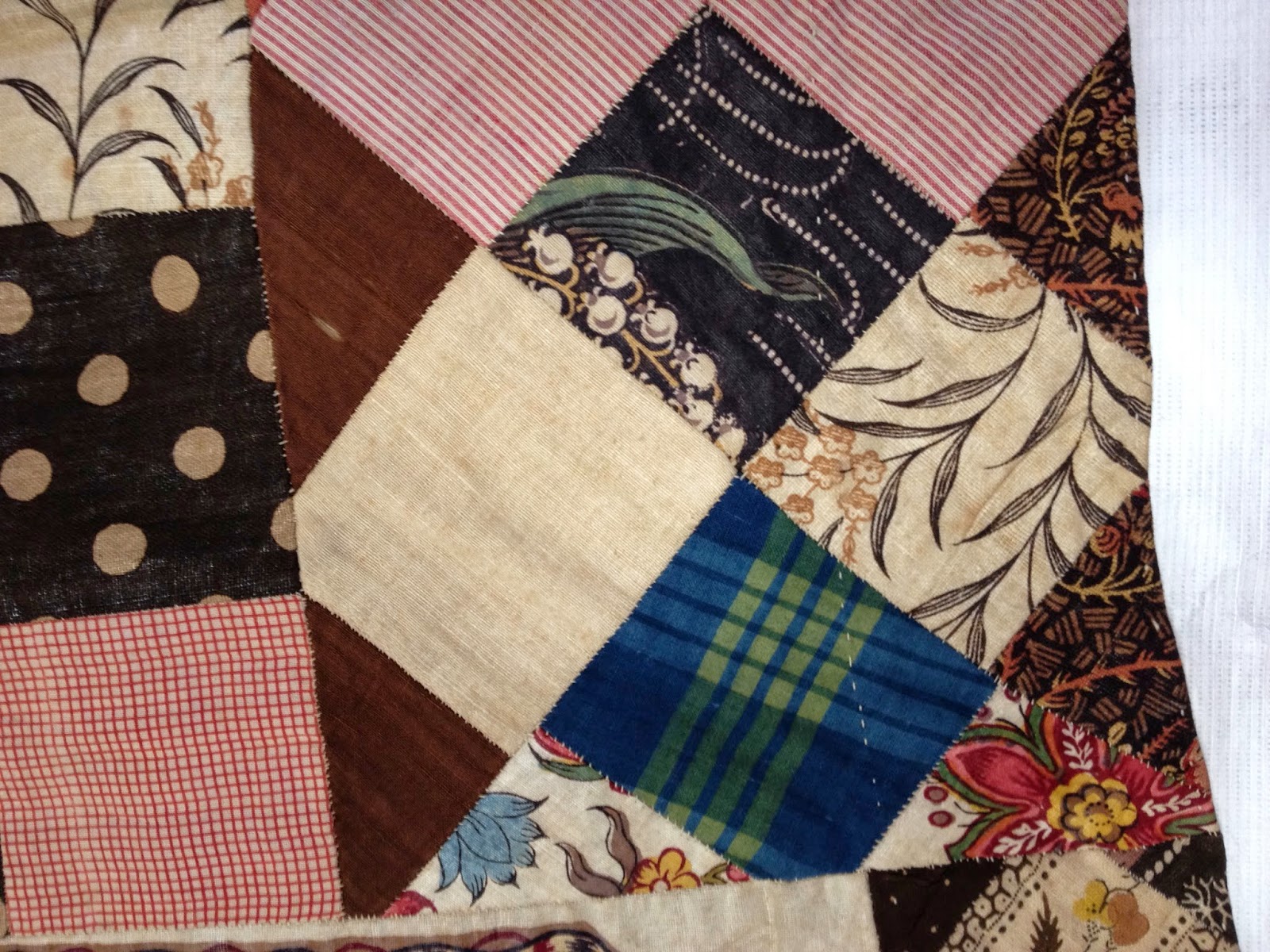 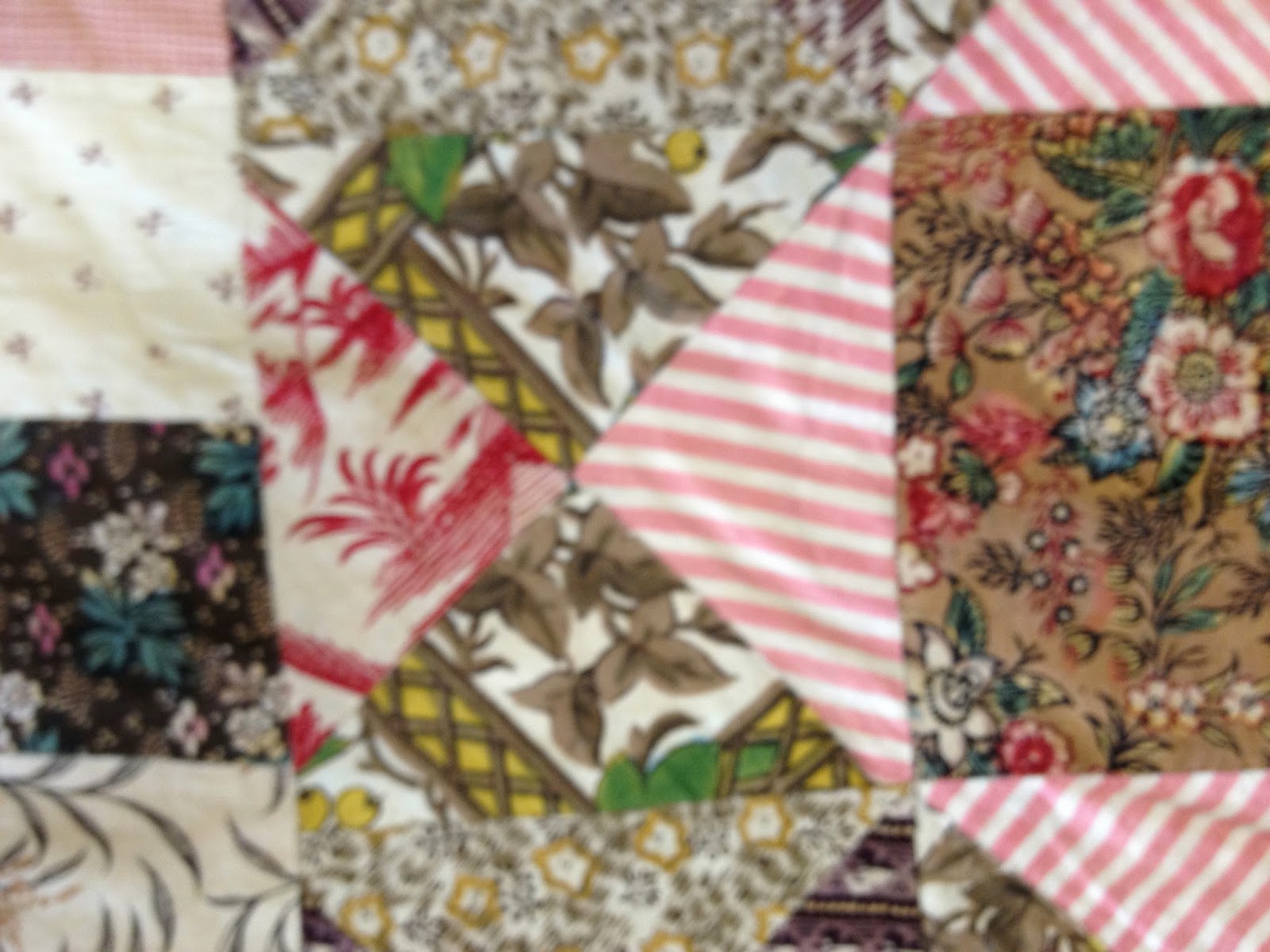 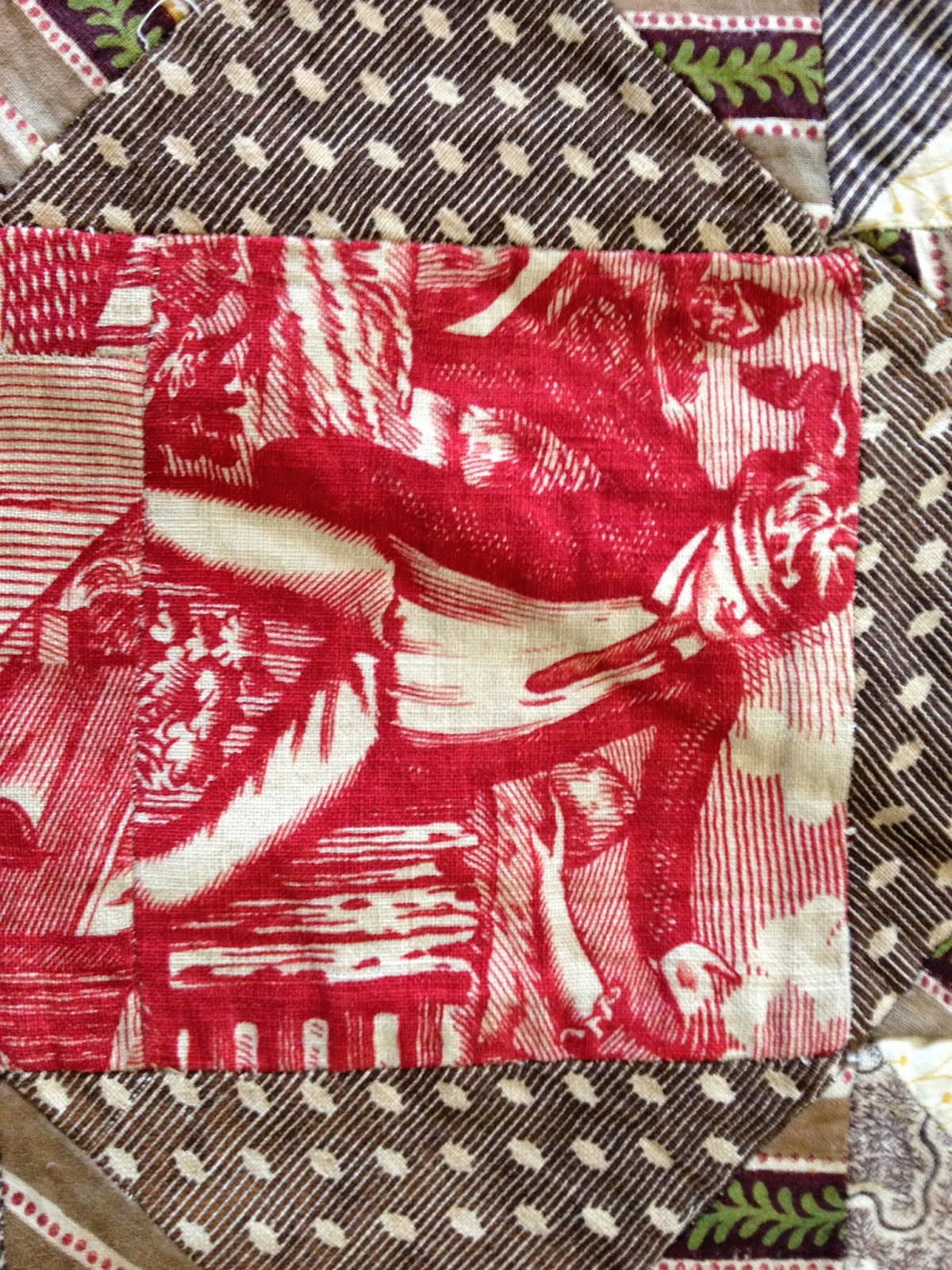 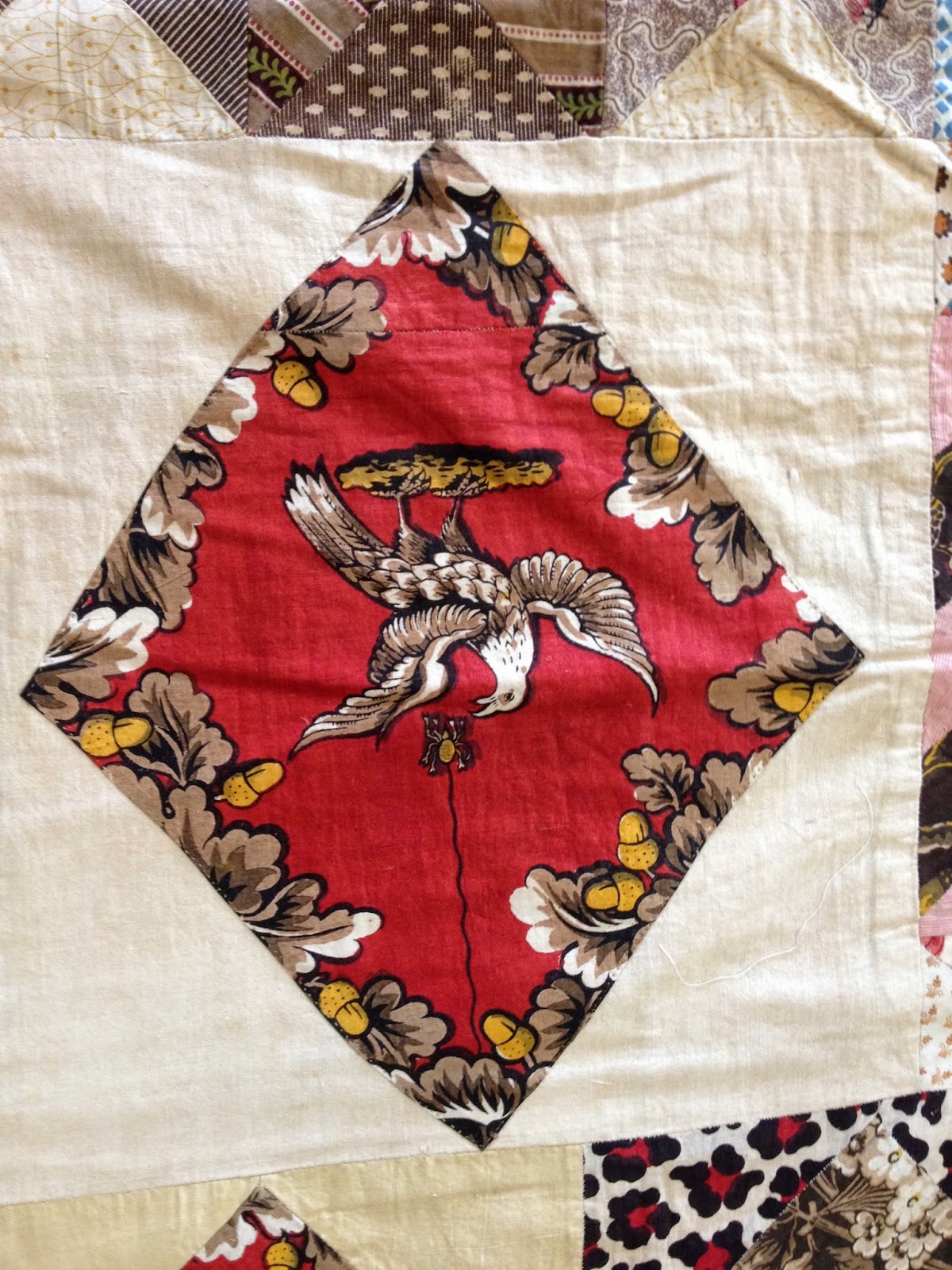 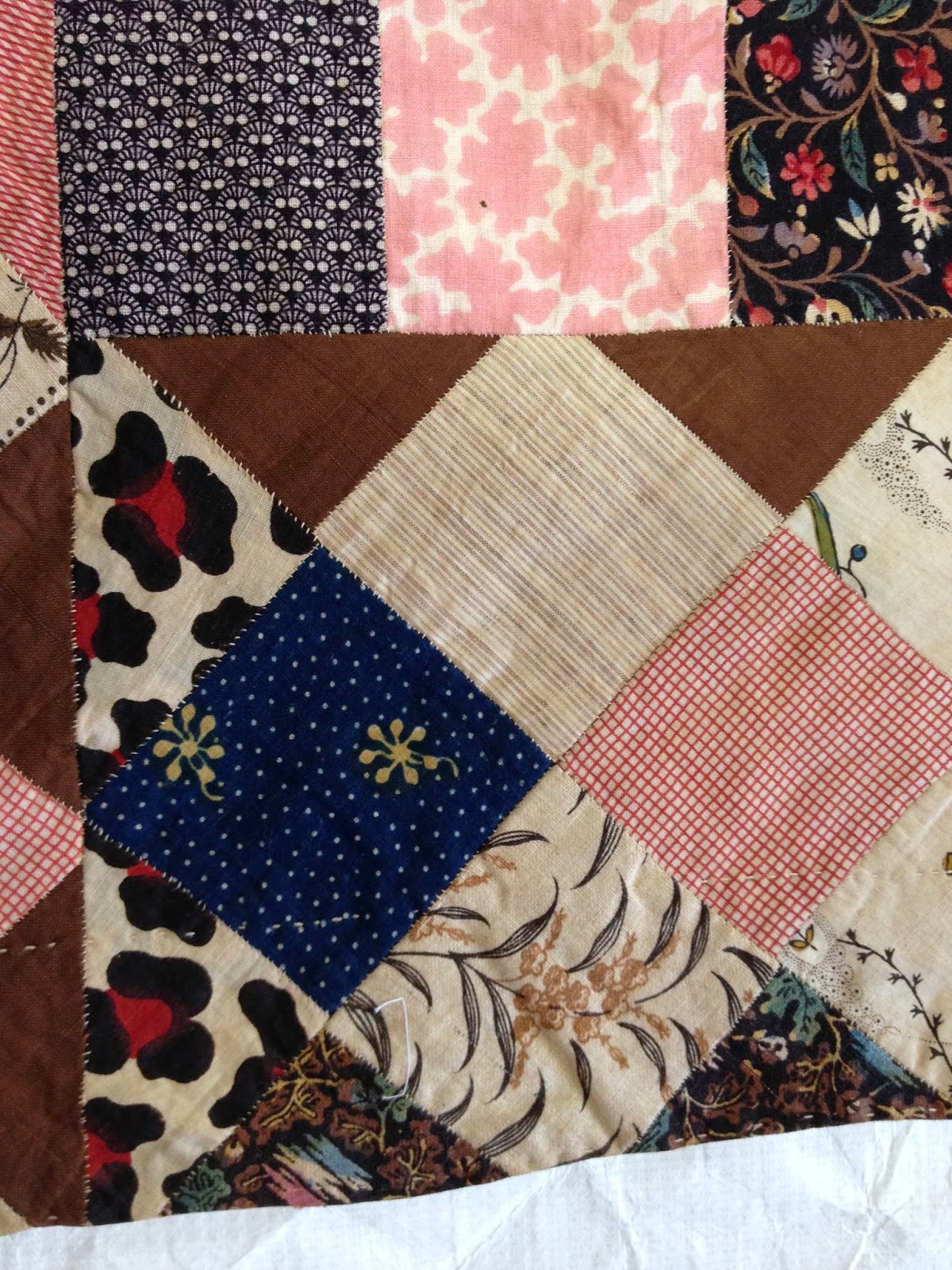 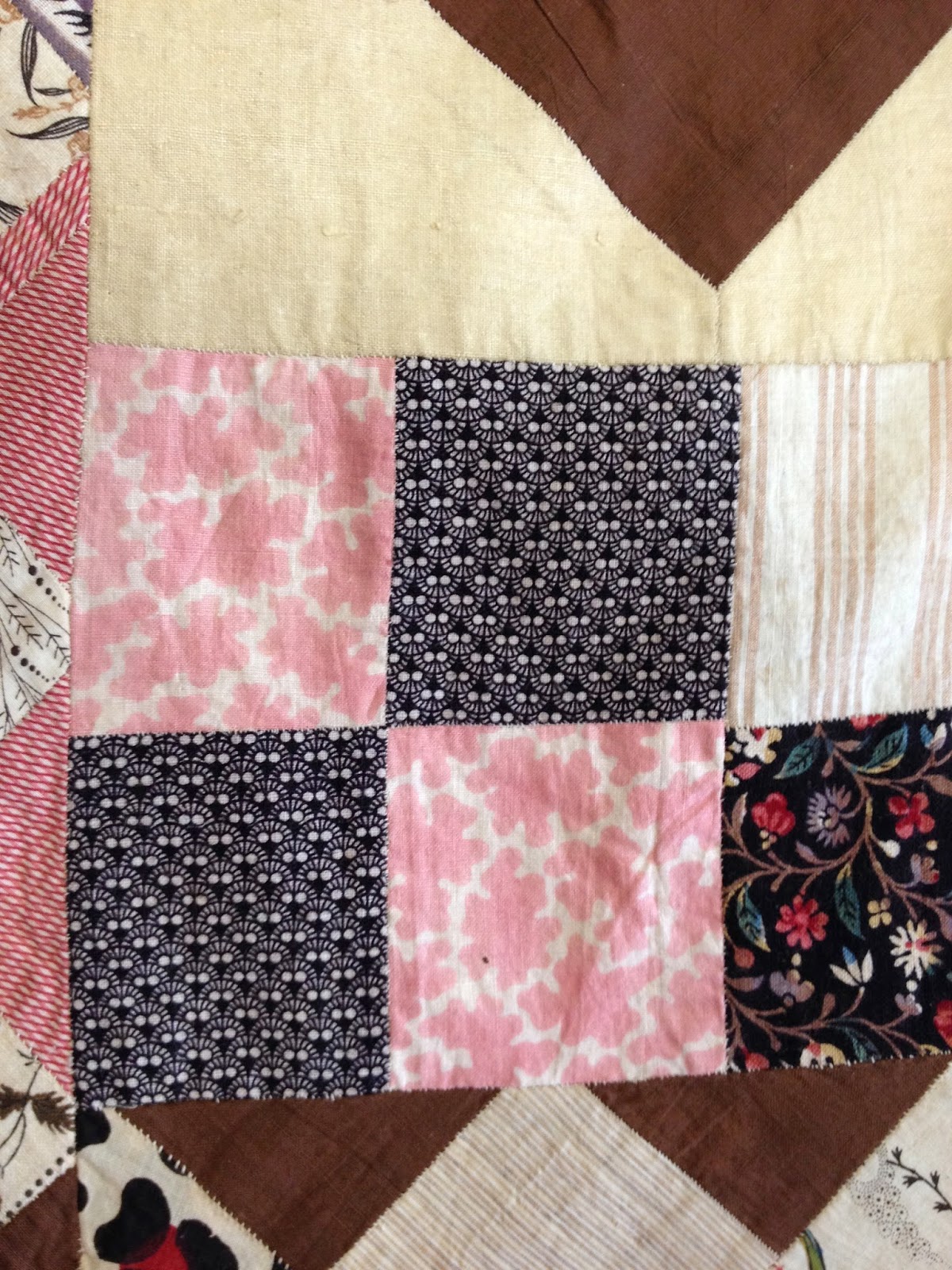 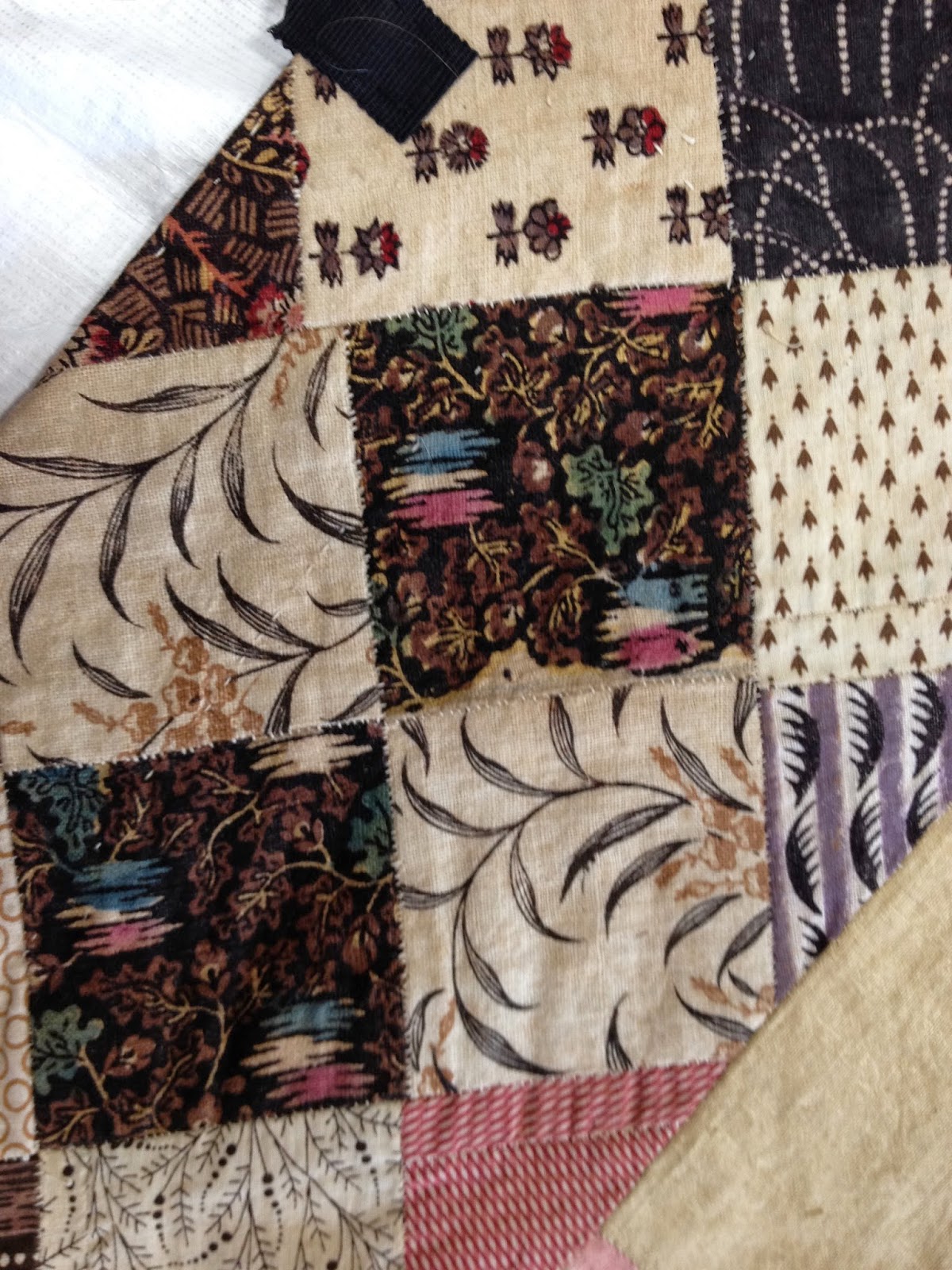 I greatly enjoyed looking at the fabrics and though I am no expert on old fabrics, they looked like a mixture of soft furnishing rather than dress fabrics?  I was pleased by this  because I use many such fabrics in my work and can't understand why they are considered unsuitable.   I love the fact that they introduce a larger scale of pattern to the patchwork, which I think makes it more interesting?

Though the sewing was competent, it wasn't highly skilled, as you will be able to see in the close-ups of the patches. Like much of the patchwork of that era, fabrics either had been sewn together to make a patch or cut from a previous incarnation.

This bedspread was given to the Museum in 1962.   The records simply say that it was a patchwork bedspread made of cotton prints, both glazed and plain with a linen backing.  It was thought to have been made by Miss Anne Pritchard of Collena "about 150 years ago"  (1812 by this calculation).

The Pritchard family lived in Collena House, Tonyrefail, a three story mansion originally built in 1093, which overlooks the village.   In the early 19th century it would have been an important house and the major one in this area which eventually was surrounded by industrial South Wales.  My next task is to find out if it is still there and do a bit more digging!

I know some of you reading this are experts at dating fabrics, so please do comment and give us the benefit of your knowledge!

Posted by Little Welsh Quilts and other traditions at 18:32:00

This quilt is stupendous!

Here in Maryland (US) we count a two layer held-together-with-quilt-stitches item as a quilt because they were historically used as summer quilts. The weather here in summer is hot and muggy and a batted quilt is way too confining. :)

I don't know what the weather is like in Wales (I'd _like_ to:) but this area, being so close to the ocean and so far south, is nasty in summer time (we usually have two to four weeks of temperatures in the high 90's and humidity levels likewise high).

What a wonderful collection of fabrics! I think you have the date right. Thanks for sharing this one!

Super fabrics in this quilt Mary, what an interesting quilt.
Thank you for sharing it.

I have some fabric study photos of a friend's quilt on my blog.....time period is also early 19th (with some late 18th)fabrics....English-pieced but very different fabrics.....many dark chintz with glaze intact.
http://www.busythimble.blogspot.com/2013/10/new-books-and-antique-fabric-study.html

How wonderful! So much to look at in this quilt - thanks for all the photos! The colour and pattern combinations are amazing - pure inspiration.

Lovely fabrics in this quilt. It gies to say how hung up we get in striving for perfection in our quilts and yet when we look at an old quilt with all its quirks we love it just the same.

Wow! Loved getting to take a look at this quilt and all the wonderful fabrics.:)

thank you so much for all the pictures, the fabrics are wonderful indeed, and so modern some of them! the purple stripe with the black " feathers" on the last pic reminds me of 1950's fabric, the pink and white splodges and the white with black and red, what ?flowers , animal print ? a Bet Lynch summer frock for sure ! there really is nothing new under the sun is there ?
You did make me tremble a bit when you said the sewing was 'competent', but not highly skilled. I think you would say the same thing to me !!

What a beauty! Thanks so much for sharing these wonderful photos. Loved, loved, loved the post!