Gaudy Welsh - what is it?

Well I've already declared my love of china especially mugs and jugs so when I saw Pippa' s post http://welshquilts.blogspot.com/  about her Gaudy Welsh china I just couldn't resist showing off some of mine - 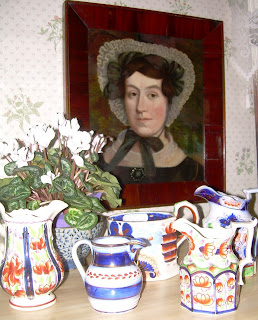 Though it was first made in Swansea here in Wales it was mostly manufactured in the numerous potteries of Staffordshire in England from 1820 to about 1860. It was relatively inexpensive and aimed at ordinary families. Its colors were based on Japanese Imari china and its decorations were mostly floral and it is said that there are more than 400 patterns though makers rarely marked them with names.

The style became hugely popular in America, especially Pennsylvania where is was enthusiastically collected and it is now more plentiful in the US that the UK.  I think the term "Gaudy Welsh" originated in the US because it seems to sum up the style which is more folk art than fine!  Of course this is why I like it!
Posted by Little Welsh Quilts and other traditions at 09:27:00

These are beautiful. My grandmother came to the U.S. from Wales when she was a little girl. I am enjoying your blog, which helps me feel connected to my roots.