Well I feel really stupid!  Thanks to Chris and Mamifleur I find I am way behind the times, as the Elizabeth Jefferson quilt I talked about in my last post had been BOMed already! Here is the link.  My goodness you Australians must devour Averil Colby! 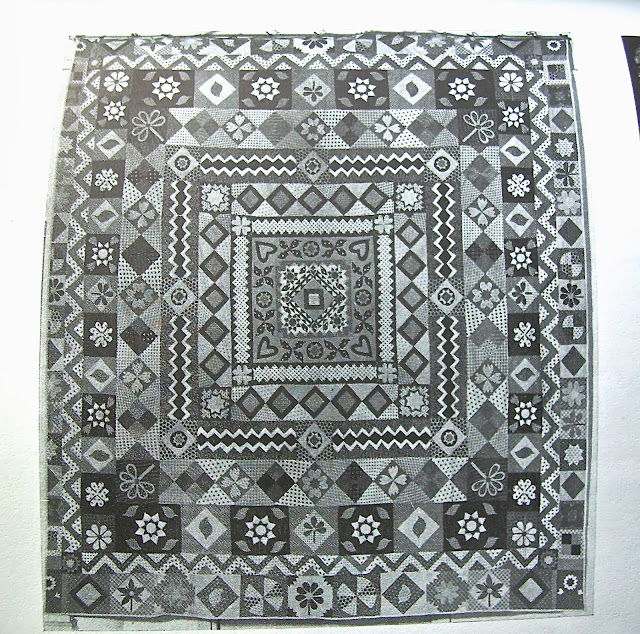 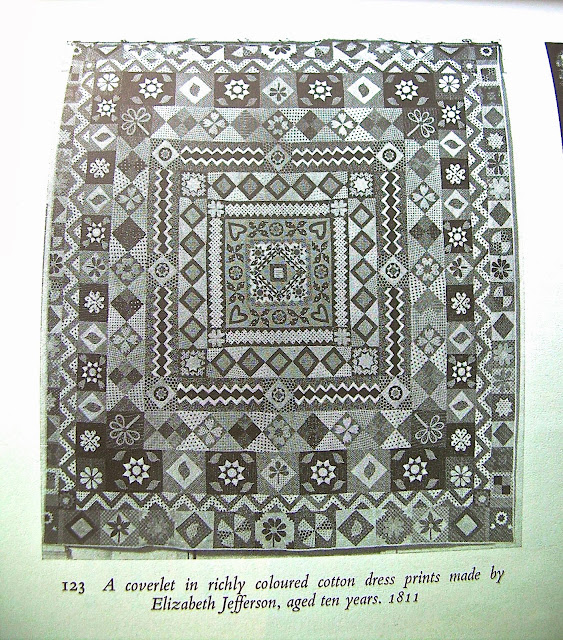 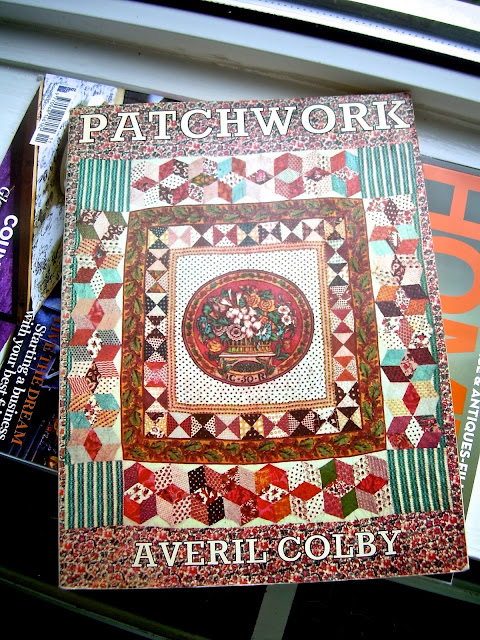 In some ways I can understand why this coverlet has passed me by, it is just too fussy for my taste.  If I was making a pattern of it I would cut out some of the outer borders - 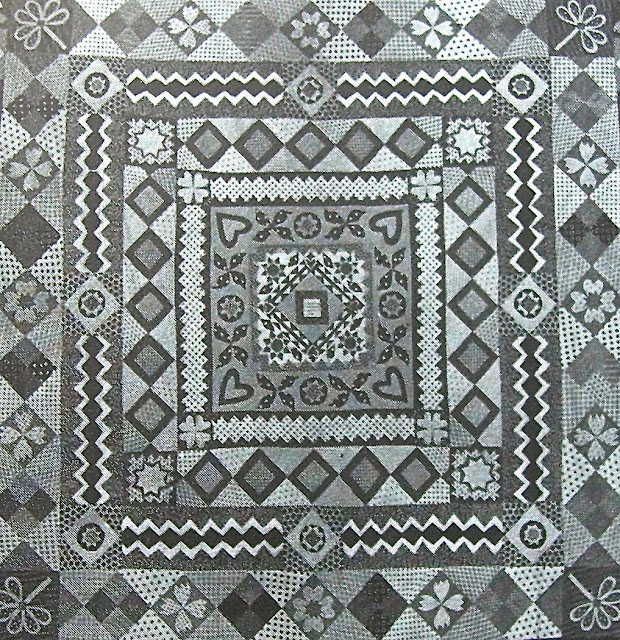 but even then I would be inclined to make the last one plain rather than pieced and just keep the four corner blocks?

Of course this is because I am a Welsh quilter and here plain borders meant that we could go to town with some adventurous quilting!  However, this is an early English quilt and would have been made by someone of gentry status.  These ladies didn't quilt, they just made the patchwork, quilting was far too labour intensive and the coverlets were for decoration only, not for practical use, so there was no need for the tedious business of quilting!  If it was done at all it would have been done by someone of a lower order.

When this was chosen as a Block of the Month project, the designer only had the b/w picture to work from nevertheless I can understand why she chose it.  It has so much content that it would keep a class working on it for a long time!

I am going to contact the museum again and try and persuade them to take another picture of the coverlet as I for one would love to see the original colours.

Just after writing this I thought I would try some basic research and Googled Elizabeth Jefferson. No record of the death of anyone with that name, so I was wrong there!   The only one to come up as being born in 1801 was in the 1841 Scottish Census and Electoral Roll -

I could have gone further on ancestry.co.uk but that would mean either paying a fee or having a free trial.  I have been in this situation before with absolutely no success and spent ages going around in circles!  So is there anyone who is into genealogy and who has a subscription that would try and find out more?  It would be interesting to know wouldn't it?  She might be Scottish?

Posted by Little Welsh Quilts and other traditions at 15:51:00

Hello again Mary, thanks for your encouragement ! I will go back to that quilt top, just not for a while...
Meanwhile I have been wondering about the Elizabeth Jefferson quilt. Have you heard of the Moravian settlement at Fairfield in Manchester ? it's a lovely model village built in the 18th century in what is now a pretty grim part of Manchester. the thing is they also have settlements in Pennsylvania and I have an idea that people travelled from Manchester to the US to help in the settlements. It is a long time since I went there and they have since opened a museum, maybe it would be possible to connect the quilt with them and the famous Jeffersons. ? what do you think ? it is interesting.
regards Susan
i

I think fussy fussy quilts seem to be really in vogue again with this generation of quilters. I would love to see the original colours so hope your successful in persuading the museum to take an up todate photo.

I would LOVE to see the true colors of this wonderful quilt! I'll *stay tuned*.

Hi Mary, I've been tring to send you a question about Welsh samplers. I sent a message to your Facebook page, but I don't know how often you check there. Just trying to find out if any of the Welsh samplers have been charted for reproduction. Please respond to the FB message or to me at elainewimberly@yahoo.com. Thanks so much! Elaine Wimberly

Thomas Jefferson was the principal author of the United States Declaration of Independence and the third President. He was a man of widespread talents, spoke five languages and was deeply interested in science, invention, architecture, religion and philosophy. His sister must have been extremely talented as well.