Laura Ashley is one of my heroines. The fabrics produced by her company has had an profound effect on my work and I still collect them. I have seen her collection of old Welsh quilts and was aware that they had a strong influence on her designs but I didn't realise how big a part patchwork had played in the formation of the business. 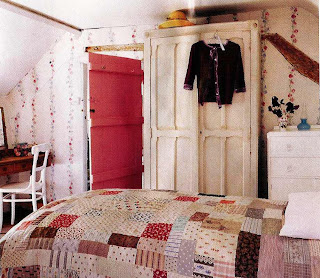 This bedroom, decorated with Laura Ashley wallpaper,
has on the bed the type of quilt that Laura
collected and which I love because they are so unpretentious.

Last week BBC Wales TV ran a documentary about her in their series "Welsh Greats".  In it was an old interview given by Laura and more recent ones with her son Nick and some of her former employees from the factory in Mid Wales.  In her interview Laura said that it was seeing an exhibition of patchwork at the Victoria and Albert Museum that began it all.

Laura had worked for the W.I., as well as taking some of their classes.  She was familiar with patchwork and quilting as her grandmother and aunts in Wales were quilters.  So in 1952 when the W.I. put on an exhibition of handicrafts at the V&A, seeing the patchwork there brought it all back and she decided that she wanted to do some herself.

However, in the early 50s suitable fabric was impossible to buy as there was still war rationing, so she thought that she would print her own.  Laura laughed at this point and said that when she mentioned making a screen print, her husband, Bernard decided to take over as he thought that he could do a better job!  This, literally was the beginning of their global business. 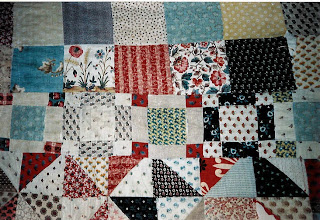 This is part of a quilt that inspired
Laura's designs. If you look closely
you might recognise some patterns!
In the excellent biography written by Ann Sebba, the story is told that when the business was booming and there was so much surplus fabric from clothes manufacturing, Laura decided that it should be bagged and sold very cheaply as " Patchwork Pieces".  This was not popular within the company, as it was so uneconomic and Bernard wanted to drop it or at least raise the price. However, Laura would not be moved and said that as it was patchwork that started their business this was the least they could do.

I immediately picked up on something her  former pattern engraver said in his interview;  Mrs. Ashley, he said, really didn't like her designs to be perfect.  She liked to see flaws in them and sometimes she would add a flaw because she wanted her fabrics to look as if they had been hand printed.

I was delighted to hear this, because as you may have gathered, I am not keen on perfection in the textile world at least!  I am so glad that Laura Ashley felt the same way!
Posted by Little Welsh Quilts and other traditions at 09:14:00

I'd enjoy seeing that programme here in Australia. Back in the 1980s, I was given several packs of Laura Ashley patchwork squares and I loved them.I used some in my early quilts and I still have some in my stash. Thanks for prompting my memories!

I think Laura Ashley got a lot of us started in to patchwork and decorating. I have a picture of me in 1977 at a wedding in a long lilac Laura Ashley number. I also had an Edwardian house at the time- We had Laura Ashley in nearly all the bedrooms with reverse colour way curtains.
I still have a table cloth and napkins I made for the kitchen hidden away in the airing cupboard. I must get it out and say a big hello to Laura Ashley.

I have always loved Laura Ashley designs too, both of my girls rooms were decorated with her wallpaper quilts, pillows for years!
my oldest dd is named Lauren Ashley...ah yes I was influenced I am sure naming her!
Kathie

Thank you so much for the link, I just saw the documentary and it brought back so many memories. We had our walls and windows dressed with her fabrics like the rest of the UK probably:))
A sad ending for Laura, passing away in her prime!

I enjoyed your post on Laura Ashley. I have long loved her style and have several of her decorating books that I use as inspiration for my own home. My mom and mother-in-law are helping me make window treatments room-by-room and I've been so inspired by her book on windows and window dressings.

Very interesting. I used to pour over her catalogs, and remember the quilts. Everything she did, I loved. Actually, the quilts may have sparked my interest in quilting, come to think of it, but hadn't thought of it before.

The reason I always like Laura Ashley is because what she produced made me feel feminine. It's hard thing to find in today's world. It felt good. I was pleased to find your book on amazon.com last night and ordered it right away. I wasn't certain I could find it in the US.

Very enjoyable post (and I've found the programme on the BBC iPlayer - UK only).

I had a lot of Laura Ashley clothes & fabrics in the 1980s, and used a lot of the dressmaking remnants in a scrap quilt a few years ago.

A very interesting read! I remember the Laura Ashley patchwork packs - I didn't realise that she was a patchwork fan like we all are!

My first patchwork cushion was made from Laura Ashley fabrics! I still have a deep pink LA bridesmaid dress worn at my sisters wedding hanging in my cupboard...considered vintage today I have no doubt!!!

This is a new blog for me to visit. I was so pleased to read your posting today regarding Laura Ashley. I have such a nice collection of her fabrics gathered over the years. My daughter brought some from England when she visited and I treasure them I have three of the patch packages in lavender and greens which I have on my to do list one of these days. I wish I could have seen the interview that was aired on the television. Back in the late 80s I made a jumper using a Laura Ashley pattern, making it in navy wool. Still have it.

I watched that programme too, it was fascinating and I learned a lot about the Laura Ashley business.
I can remember being taken to the Llanidloes shop by my mother when I was a child and waiting for her to sift her way through the bags of 'patchwork pieces' that you mention. I still have a few of them and I try to incorporate them into my own work.

I had a pink sprigged Laura Ashley wallpaper and curtains as my first Grown Up bedroom.

gosh that took me back I used to love buying the bags of patchwork pieces and I had Laura Ashley wallpaper and curtains all over my house ...x