When I saw this picture in a magazine recently, it raised some questions in my mind - 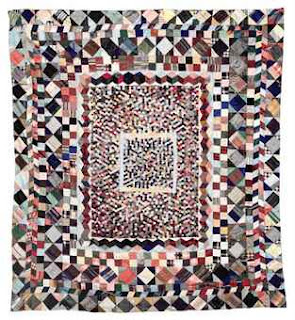 This French patchwork coverlet was sold at Christie's in London earlier in the year for £625, failing to reach it's estimate of £700 - £1,000. Patricia Frost, the textile specialist at Christie's, is quoted as saying that in the wake of the V&A exhibition last year it was hoped that prices of patchwork quilts would be more buoyant, but that this hadn't happened.

Now I am not sure whether to be sad or glad about that?  Of course we want these wonderful objects to be considered valuable but in what way valuable?  It seems in this day and age that things have to have a large price tag to be appreciated.  On the other hand when we pay a lot of money for things we generally  look after them!  High prices for patchwork quilts also means that those of us who want them for the "right reasons" can't afford them?  So in a way I am glad that the V&A effect hasn't pushed up prices.

This leads me to thinking what effect the exhibition did have, if any?

Though I make patchwork quilts and belong to a group,  I don't know much about the big picture.  I would love to know how many people came away from the exhibition and took up the craft and if they did what most influenced them?  Whether they liked the modern work or were intimated by it?

I am not sure if we will ever know, though I for one would be really interested.

.
Posted by Little Welsh Quilts and other traditions at 10:29:00

Mary, I deal in vintage textiles including a lot of quilts and, believe me, the bottom has dropped out of the quilt market.Not sure why this is. It breaks my heart to have to sell fabulous, antique items for almost peanuts, know that it is being bought because, say...the dog destroyed my last one

Hi Mary, it's a conundrum isn't it. Your post made me think of Joanna S Rose's words (I apologise if I am not paraphrasing her accurately)that she doesn't think herself a 'collector' as that implies that she is on a quest to better her collection with each purchase rather than buying what she 'likes'.

I was in the V&A shop after the exhibition and two young ladies in their 20s were looking at books and talking about patchwork. I encouraged them and told them to look on blogs and the internet as well - so who knows they could possibly be reading this!

I don't know anything about quilt prices, but do think that quilt is beautiful - so intricate, with its muted colours. Must be difficult to price something that took so many hours work.