I have never been to the BBC Proms, it's on the list of things to do.  Every year I think maybe next year, but  this year's seem to be booked up already, I just checked!  I can at least watch the TV coverage though and for the last two years the John Wilson Orchestra has been thrilling us with an evening of music from the shows, filling the Royal Albert Hall with their wonderful Big Band sound. 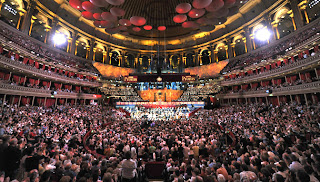 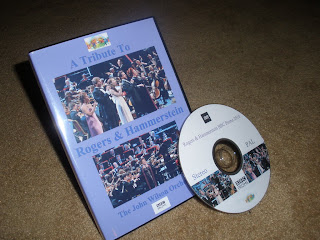 Last year it was a tribute to Rodgers and Hammerstein with a great line up of singers, some of whom were familiar because they were British, the one exception being Rod Gilfry.  All you from the States reading this, please excuse my ignorance, because he is a Californian, who is famous on the opera scene in the USA and in Europe, where he worked for many years.  I am not interested in opera so had never heard of him, but I checked him out after hearing this performance.

I rarely like opera singers who sing popular songs.  As far as I am concerned they should stick to what they can do and not try and muscle in what they don't do very well.  Obviously these albums sell, so what do I know?  Rod Gilfry is a rare exception as he seems to be able to moderate his very powerful voice and sing a ballad very well indeed.  "Some Enchanted Evening" has never been a  favourite of mine, even with Rossano Brazzi miming it, but when Rod Gilfry sang it at the Proms, I heard it for the first time!  Just great!  I was smitten!

Here's the link to the video, have a listen, it's about third of the way through, so be patient -
http://www.youtube.com/watch?v=ASS8PHn2X00&NR=1
Posted by Little Welsh Quilts and other traditions at 10:00:00

hi Mary,
a few years ago I had the pleasure of attending the Last night of the Proms/Proms in the Park at Swansea. It was a fantastic night out with Welsh Flags waving and Welsh spoken all around me. I remember trying (not successfully)to sing along in Welsh karakoe style for a couple of songs. It was a hightlight of my UK trip so I hope you get to a performance one of these years.
Thanks for reminding me of that time :-)
Cheers Margaret