My third favourite from the V&A Collection

I love 17th century British embroidery and for my third  favourite object from the V& A collection I am choosing a band sampler.  No it is nothing to do with music (one of my former embroidery students asked this), but one of our early forms of sampler making.

In my opinion it was a time when embroidery here was at its best, before sampler making had turned into sewing pretty pictures with a limited number of stitches.  The young girls who sewed band samplers then used very complicated stitches indeed, many of which are rarely, if ever, used today.

This is one made by Elizabeth Short dated 1661 - 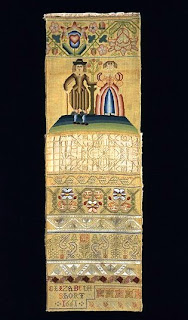 I first discovered it hanging in the corridor by the Textile Study Room (it has been moved since) and was charmed by it.  It certainly isn't the most elaborate band sampler or by any means the longest, in fact it is quite short in comparison to some.  Perhaps that is why it appealed to me, it made it seem less intimidating, somehow more do-able?

A shortened version of it has been charted for reproduction by The Scarlett Letter http://www.scarlet-letter.com/rsdescr/17thcen/short.htm#ShortE,  but I haven't worked it and probably never will, because though I used to teach the subject, these days I am content just to admire band samplers.

The picture I have used above is the best one I can find.  Even though the V&A photographed it for their book on samplers they haven't yet made a better image generally available.  However, one facinating fact came to light when it was taken out of its frame to photograph for the book!  This type of sampler should be as good on the back as on the front, as the stitches used were originally for decorating reversible objects, such as cuffs, collars etc.  This makes them extremely challenging for us to do today as we are considerably less experienced at such work.  Most of us don't bother, for instance, we do back stitch instead of Holbein stitch which looks fine on the front of the work but is not the same on the back. This is not so with Elizabeth Short, this is the back of her work - 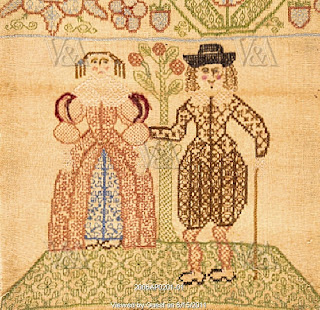 After working the two delightful figures, she decided to "clothe" them with detached buttonhole stitch which because it is a detatched stitch, only appears on one side of the work.  I think I like the back best?
Posted by Little Welsh Quilts and other traditions at 12:36:00

A beautiful sampler Mary. There is a very good collection of samplers at Montacute House (NT) if you are ever in this direction (Somerset)

Mary,
I just found your blog.
The sampler was a great find too. In Florida those types of finds are few and far between. You need to be in the northneast.