Following up on an earlier post about how working with squares is so very satisfying, this is a scanned picture of a stitch sampler from my book "House and Garden Samplers".  It does have a dark blue border with the name of the Education Centre, date and name lettered in gold, surrounding the stitched frame which sets it off, but that was not included in the photograph - 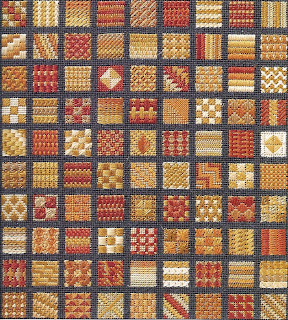 I made it when I was teaching embroidery and it was based on a patchwork sampler quilt. It entailed working a frame of squares and filling each square with a different needlepoint stitch in a combination of colours.  It was a popular class project and I have lost count of the number of very different but highly successful versions.

I suspect that it was popular because everyone thought it would be relatively easy working within a square framework.  Actually many discovered that it wasn't easy as they had first thoughtl, but it was addictive an excellent exercise in making colours work together and interpreting stitches.

Some students made more than one had them framed as little tables or trays, but most hung them proudly on the wall as a memento of a time when they struggled to fill their little squares and succeeded!


Posted by Little Welsh Quilts and other traditions at 08:58:00