A lovely Welsh Quilt at Llanidloes

Last week I actually made it to Llanidoes to see their annual quilt exhibit just before it closed.  The exhibition has been running since July and one tends to think there is plenty of time, only to realise suddenly that it is the last week!

It's always a pleasure to visit this lovely town in the heart of Wales, though it used to be more a place that we from South Wales passed through on our way to the North.  Having the Quilt Association based there changed that, making it a firm destination.  However, I can't help but mourn the closing of  the Laura Ashley shop, which at one time was the only one in Wales, being near her home and factory. 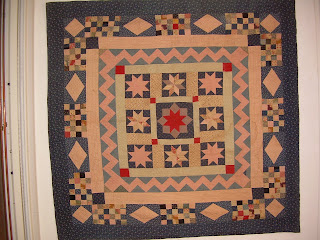 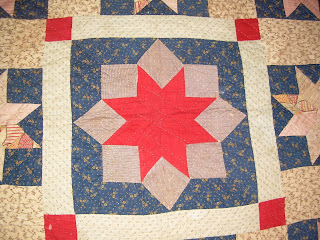 The above was my favourite of the old quilts.  There doesn't seem to be much known about it only that it had come from Ceridigion (also know as Cardigan on old maps and records) which of course is a rich quilting area in West Wales.

Who could resist that love rolling red star in the middle?  As soon as I saw it I felt an urge to reproduce which I am resolutely quenching - but it's oh so tempting!

On the way home we decided to call in at Llangoed Hall which used to be Bernard Ashley's hotel near Builth Wells.  It has always been a favourite with us discerning folk, but when he died last year it was sold and we were fearful that things had changed.  We need not have worried however, it was a little bit shabbier but still lovely and we had a very good afternoon tea!

I wanted to add some photographs of the hotel but Blogger is playing up so I will do it another time and also tell you about the fabric shop!


Posted by Little Welsh Quilts and other traditions at 09:34:00

Email ThisBlogThis!Share to TwitterShare to FacebookShare to Pinterest
Labels: Llanidoes 2011

What a lovely quilt! I really like the way the maker has done the central star and the diamond and squares border - can definitely see why you felt the urge to reproduce this one!!

C'mon Mary how are you progressing on the Cottage Orne quilt?

I can understand why you would want to copy this quilt. It is in the exact color scheme that attracts me too. Love that red star. . .

Oh, I can see why it was your favorite. It is fabulous!

What a beautiful quilt...

I have recently discovered your blog - not realising that I already have your book on Welsh Quilts! I'm new to following blogs, but really enjoying yours.
I wonder whether you could give me advice as a novice? I'd love to make myself an heirloom and my Welsh-language (and sewing) roots are in north-east Wales. Is there a typical pattern from that area that I could use/copy - both in terms of the quilting and patchwork elements.

I'm sorry (to "said") I have been late picking up your comment. North East Wales wasn't really a quilting area and I don't know of any patterns that were done there. The only quilt that springs to mind (from Denbigh)is The Tailor's quilt on Page 15 of MWQ but that would be a tall order as it is extremely complex - a one off really but very inspiring. Sorry can't be of more help.