I have just had my loft insulated in preparation for winter and because I have just received a large gas bill!   What has that got to do with the price of fish I hear you ask?  Well I had to take down pictures that were a bit too near the loft ladder and I looked at them anew! 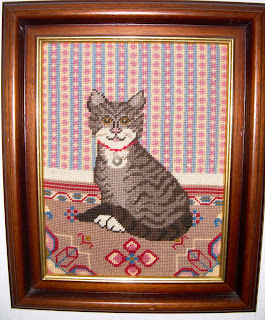 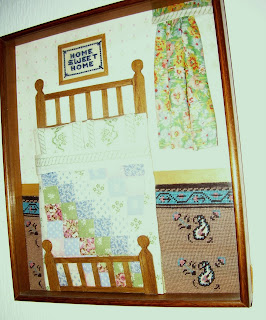 The first one could be of Wilfred - without the bell of course!  Those who know him know that Wilfred wearing a bell would be out of the question!  Long story - I have nothing against cats wearing bells, but Wilfred no - it would freak him out!

The second picture is in a box frame with glass, so please forgive the reflection, it was the best I could do.  The bed is made of balsa wood, the quilt mainly Laura Ashley squares, the curtains Liberty Lawn, the sampler cross stitched and the carpets needlepointed.  I wish I could say they were my designs but I made them many years ago before I realised that I could make up my own.


When I first married I used to buy Good Housekeeping magazine, not because I had high aims in housekeeping, but  mainly because it  featured things to make designed by Heather Clarke.  She was very versatile indeed and I liked all the things she designed, but these are the only two things that I can remember making, my memory is rather hazy on the rest.

Where is she now I wonder?  There's nothing on Google that rings bells!  Does anyone else remember her?


Posted by Little Welsh Quilts and other traditions at 10:29:00

I did that cat as well way back when. I have not a clue if it survived the move. I made it for my sister but the cat had gone before it was finished.