I have been on a short holiday in the Cotswolds, staying in a favourite cottage in Stow on the Wold.  It is right in the centre of the village, tucked away behind the main street and approached by one of the medieval sheep runs - narrow alleys used for counting the sheep brought to the wool markets in years gone by.

I like staying in the centre of a village especially at this time of year as evenings darken.  It's so much cosier than being out in the middle of nowhere!  Also, it's handy for a lazy cook as Stow has lots of places to eat and good take-aways!

One of the places we visited was Great Tew, an estate village in Oxfordshire - 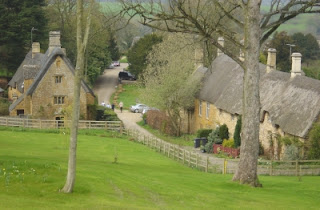 
one of the most depressing sights in the whole county. Terraces of cottages lie derelict and will soon be beyond hope of restoration. A scheme of gradual rehabilitation is said to be in progress, but nothing has been done meanwhile to prevent the decay of unused cottages, some of which are completely ruinous and will need to be entirely rebuilt.


I am pleased to say that things have been taken in hand by the present owners of the estate and the village appears to be thriving, with a village shop, good pub and a much extended village school.  However, we couldn't find the Church which was odd?  It was there somewhere, because John Sergeant's (well known to us in the UK) father was Vicar there and John was brought up in the village and attended the school.  We scanned the horizon but couldn't see any sign of it!

I took some pictures of the delightful thatch cottages because they are extremely picturesque,  In fact, I  have a birthday card somewhere with an image of the first cottage drawn by one of my favourite artists, Richard Partis, so it was intriguing to see it in real life! 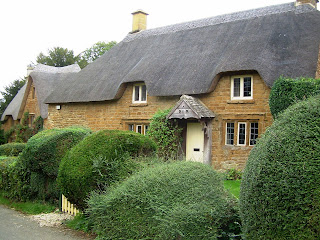 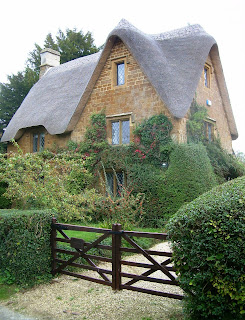 So pretty!  I wonder what they are like to live in?

Posted by Little Welsh Quilts and other traditions at 14:57:00

Your pictures are lovely! I'm so jealous. For some reason they are putting me in mind of Agatha Raisin! I need to get by the library and see what they have new to read. I've been quilting so much I haven't read in ages.

Did a small google and came up with pics of The Church of St. Michael and All Angels, Great Tew, Oxfordshire..... was this the church you were looking for..... to live in one of those cottages think tiny.... but rehabed plumbing! just a guess....

Oh, it is so quaint! While in England last spring, I only got a taste of the Cotswolds. Can't wait for a return trip! Will keep your info in my notes to remember to stay in the town itself. Was the cottage that you stayed in period, or are the rentals updated?

It's so beautiful...I would love to visit this countryside one day. Hope I will!

The cottages are breathtaking! Thanks for sharing.