About three years ago I did some research on the Darowen patchwork coverlet which is in the collection at St. Fagan's and wrote a piece on it which was published in Winter 2009 edition of "The Quilter".

It has always been my intention to visit the village and particularly the Church which is portrayed on the coverlet.  Well last Friday I made it! 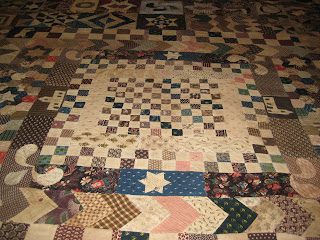 I rarely drive into the heart of Wales (more fool me because it is so beautiful) and though Darowen is just a few miles off the main A470 North/South Wales trunk road, it is a good 3 hour drive. Sonia and I were travelling to the BQSG Symposium at Gregynog and though Darowen was a bit further north, we decided that it was do-able. We weren't disappointed as when you turn at the small white signpost saying "Darowen", the narrow road climbs into another world of wonderfully varied country with beautiful vistas on every side which can't have changed much since the patchwork was made.

Sonia was with me when we first viewed the coverlet at the museum and shares my feeling for it, so we both found being in Darowen, seeing the Vicarage and visiting the Church quite an emotional experience.  We walked the same lane from the church to the vicarage as the sisters who made the patchwork must have done so long ago - it was strange doing this!. 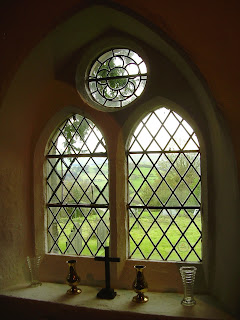 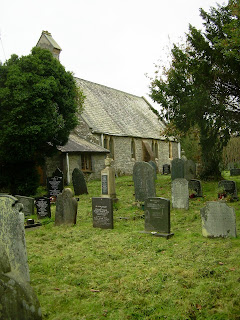 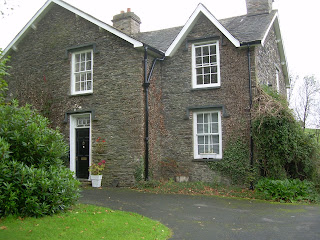 I now feel enthused to do more research.  There is one obstacle, however, I don't speak Welsh and much of the information is in Welsh.   Well I'm not going to let put me off, I will just have to ask for help from my Welsh speaking friends.
Posted by Little Welsh Quilts and other traditions at 14:14:00

Lovely quilt!!! Love the buildings and countryside. Thanks for sharing! Have a great weekend.

Love this quilt and the story.
Have you reproduced this one Mary?

No Sue, I think this one is a bit much for me but I know someone who is working on it! I must get in touch and see how it's going.