When I wrote my last post I intended to talk a little bit about William Blake who wrote "Jerusalem" and Amanda White, an artist whose work I admire.

William Blake was an engraver, as well as a poet and in 1800 he and his wife were lent this cottage in West Sussex. 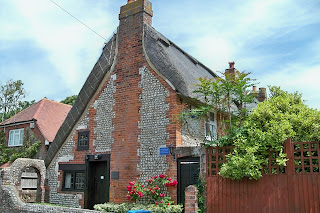 The intention was to get away from the dirt and bustle of London and gain some peace and inspiration, as well as doing illustrating work for a patron who owned the cottage.  It didn't entirely work out as these situations rarely do. Though very pretty, the cottage was damp and after enduring it for three years, they returned to London - I'm sure that you can imagine the complaining that went on there?  However, those years of country living did make an impression on William. because afterwards he wrote of "England's green and pleasant land", in his poem "Jerusalem".

This is William's engraving of his temporary home - 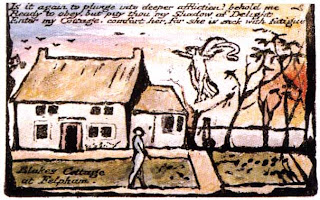 and this is Amanda White's paper collage - 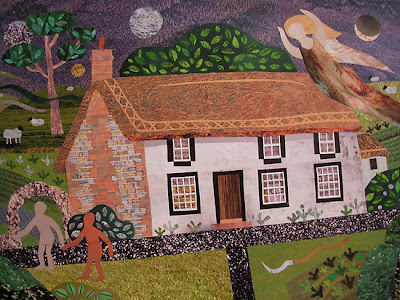 I have recently discovered Amanda and I love her work.  She has done a series of Writers' Houses all of which I like because they are quirky and patchworky!

Before I did patchwork I used to make house portrait collages using different types of fabrics and had great fun embellishing them with bits of lace and braid to achieve architectural details.  Though I enjoyed the making when patchwork took over my life, fabric collage ceased but I still admire it as a craft, though it makes for an even messier workroom.

As I am rather obsessed with houses, I can't resist mentioning that a thatched cottage in West Sussex is an "Escape to the Country" dream.  Click here if you would like a tour of one on the market now in the lovely village of Amerberley.

It's an area of great beauty with delightful towns and villages with lovely and varied architecture and not far from London.  This makes the William Blake's cottage in Felpham a very desirable place to live, with a correspondingly high price tag. Let's hope that the damp problem, which so irked Mrs. Blake, has now been solved with a good damp course!

Posted by Little Welsh Quilts and other traditions at 09:24:00

I just love this house of amandas! It is just amazing, something I would love to attempt to do as well
I have always been fascinated with houses as well.
Kathie

Golly, what a surprise, Mary!

Thank you very much, the feeling is mutual - your quilts are so beautiful and so far removed than anything I could aspire to. I did try. Once. 25 years on and still not finished!

Must be amazing to live in that cottage - Sussex is a wonderfully inspiring county - Blake in Felpham and Samuel Palmer in Shoreham ... bliss.