Following on from my last post about the two images I found in Hardy's Cottage on the National Trust Collections website, the second was a sampler which I had seen in situ many years ago.

Though I have been concentrating on quilts for the last twelve years, prior to this I was working on my  first book which was on samplers and I continue to be extremely interested in their history.  It's a very frustrating form of research, because so many of our British samplers are sold and resold through dealers and auction houses and each time they change hands vital information is lost, so it's an uphill struggle trying to make sense of it all.

As in the USA,  the majority of our British samplers were made in schools, which means that there are groups of samplers very similar in form and substance because they were based on the same design.  If just one sampler can be identified as coming from a certain school in a certain place, it usually means that all the rest in that group were made there too.

Lets start with this one, it's quite well known as it's in the V&A collection. 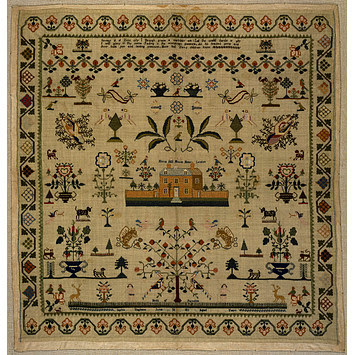 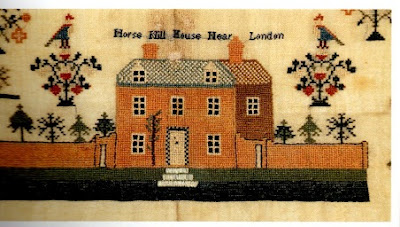 It was made by Sophia Stephens, around 1830 and I hope you will be able to see that the house is named as Horse Hill House near London.  This sampler is quite large in comparison to the others below, though no size is given. 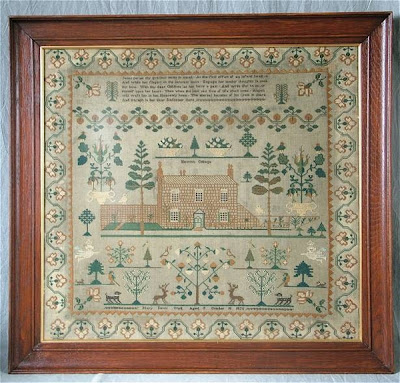 This sampler was made by Mary Davis in 1825.  It has many of the same ingredients including the same border though the house is different and is named as Newton Cottage. It like all the others is much smaller than the first one by Sophia Stephens, though all share key ingredients.

Here's another made by Jane Mortimer in 1822 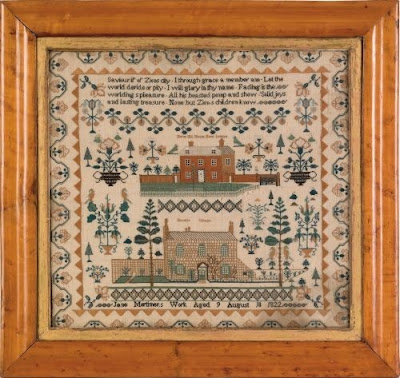 Again it has the same border and many of the same motifs but this time there are two houses - Horse Hill House and Newton Cottage!

Now we come to my discovery at Hardy's birthplace - 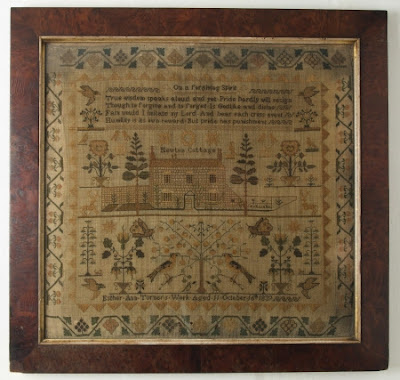 It was made by Esther Ann Turner aged 11, in 1839 and again shows Newton Cottage. 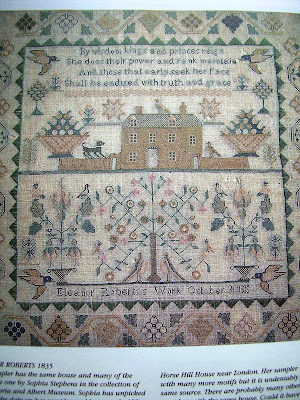 It was made by Eleanor Roberts in 1835 and this time, though it isn't named, the house is Horse Hill House and again it has the same border and other identical motifs.

Well what do you make of it all?  Are the houses real houses, which wasn't usually the case with houses depicted on samplers and if they were, were they near London?  These two aren't the stereotyped sampler house and do have a look of real houses and both are named, but why did all the girls use the same two houses over a period of years.  Did they have two house patterns to choose from and Jane Mortimer being ambitious decided to do both?

We shall probably never know, but wouldn't it be nice to find out more?  All we need to discover is a village near London with a Horse Hill House and a Newton Cottage - easy peasy!  Answers in comments box please!

Posted by Little Welsh Quilts and other traditions at 15:08:00

I was fascinated by the sampler of Horse Hill House as I think I may well know this house. There is a hill near Richmond/Richmond Park which is known locally as Horses Reach and is infact on Richmond Hill. A house here looks very like the sampler and this stretch of river is portrayed in many paintings by famous artists. The house appears to be the same and there are riding stables nearby and this area was frequented by Henry V111 and his hunting parties.
The horses ride along the riverside which runs from London out to Surrey - and originally pulled a small boat along the river towards an island (Glovers Island), which was used for picnics in the 1800s.
I will take a picture of this house next time I go by and meanwhile this stretch of river was photographed by me and put on my blog just last week - sadly without the house, which I think may be the same one! xx

Wow. A picture of the house would be wonderful! You can message me through Facebook!

What you say about the house being the subject of paintings is significant because sampler scenes were very often taken from engravings and paintings (as were 17th century embroideries) and I have always had a suspicion that these houses could have been copied from an engraving - something about the "near London". So it might mean that the samplers may not have been sewn in Richmond.
Things are not simple in Sampler World unfortunately.

It would help matters greatly if we could find Newton Cottage cottage as it may be in a different part of the country entirely!

The house has been greatly changed and enlarged and rebuilt over the years (30 plus I have known the area) and now looks slightly different but it is in an area all named by the horse - the local pub is the Laughing Horse -the view is Horse Reach and the Grey Horse and White Horse edge the parklands.
Richmond has been a favourite playground of the Royal Family since the 1500s when Henry VIII came to Hampton Court and the surrounding lands became his hunting grounds - Bushy Park and Richmond Park in particular.
Joshua Reynolds and Lord Cardigan lived here on the hill and Turner painted along the Thames (can be seen in the Tate) and even along to Kingston. Apparently Reynolds house on the hill was used by many artists as a vantage point.
Fascinating eh?

Shall now look into Newton Cottage! I am not on Facebook but will try a pic next time in Richmond - the house is now surrounded by flats and a church sadly! xx

Regarding ' Newton Cottage' - this would have been sewn around the time of Newton 100 year centenary. The date is important as the Gregorian calendar was changed during this time and over 11 years the dates are rather hard to follow and may be incorrect - no internet then! I looked at the pic of his birthplace - Woolsthorpe Manor in Grantham, Linconshire and it is not too disimilar (the pic says 'at this time' so allow for some change). Interesting.

I always think that if you follow the artist (or child in the sampler) it is easier to get answers. They would usually have been very local as no TV, no net and little in the way of photos.

Wow! I am fascinated by this topic as I have just inherited a sampler from the 1840s with "Horse Hill House" as part of the design. I too am very curious as to whether this was a common design element or whether it refers to a specific property.

No more information has come up about this design Deb! Would love to see your sampler, but perhaps you could let me know the name on your sampler?