I don't know when it happened, but I have just discovered that the National Trust Collections are now on line.  This is really good news, because until now if you saw something interesting in one of their properties, especially if it was a textile, you wouldn't have be able to obtain an image of it, let alone any information.

You have heard me grizzle before about museum websites being difficult to negotiate and in comparison this NT site isn't too bad. You can either search through a property or a category.  "Textiles" is a very varied category and I had to trawl through a great deal of quite boring stuff to find things that interested me i.e. quilts and samplers.  However I did have some success - two items from Hardy's cottage - one this very beautiful patchwork coverlet.  Perhaps a bit high status for such a humble cottage but an English coverlet where the design has been planned for once! 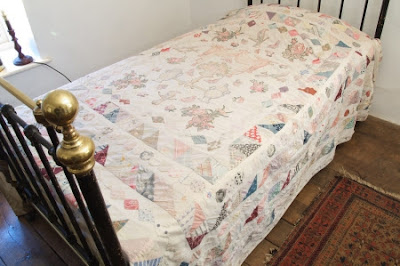 Sorry about the quality of the picture, I have tried to enhance it but without success, it is simply not a good enough image to start with which is a shame because it is a very pretty coverlet.

Here are some closeups I found on Google Images and it looks as if many of the pieces have been appliqued to the background rather than pieced. 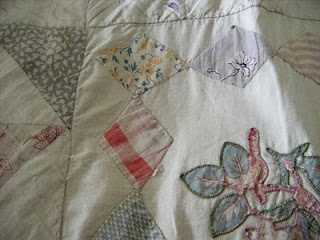 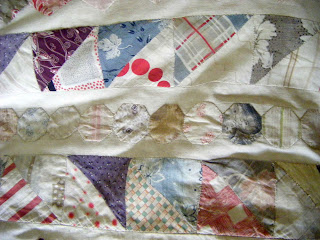 If you haven't been to Thomas Hardy's birthplace in Dorset  you have missed a treat - it really is the most delightful little thatched cottage and set in a pretty garden.  If you do have a chance to visit, don't take the easy way along the lane, approach it through the wood, it's a bit of a trek but well worth it and try not to get lost as my husband and I did, pick up a map! 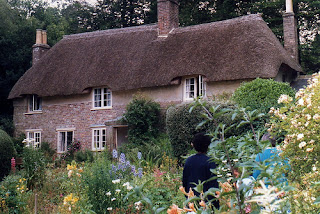 Referring back to the NT Collections website, I'm not giving it high marks because the pictures generally are not good enough and seem to vary from property to property.  Though there is a zoom facility on all the images I would prefer to be able to save a much larger image as a reference.

Could do better NT, but may be seven out of ten for a reasonable attempt at moving with the times!

Posted by Little Welsh Quilts and other traditions at 13:03:00

Email ThisBlogThis!Share to TwitterShare to FacebookShare to Pinterest
Labels: Hardy's cottage and coverlet

I had a lovely visit to the cottage years ago on a beautiful summer day - the memory has stayed although the husband is long gone and another taken his place!