I just had to share this image with you - 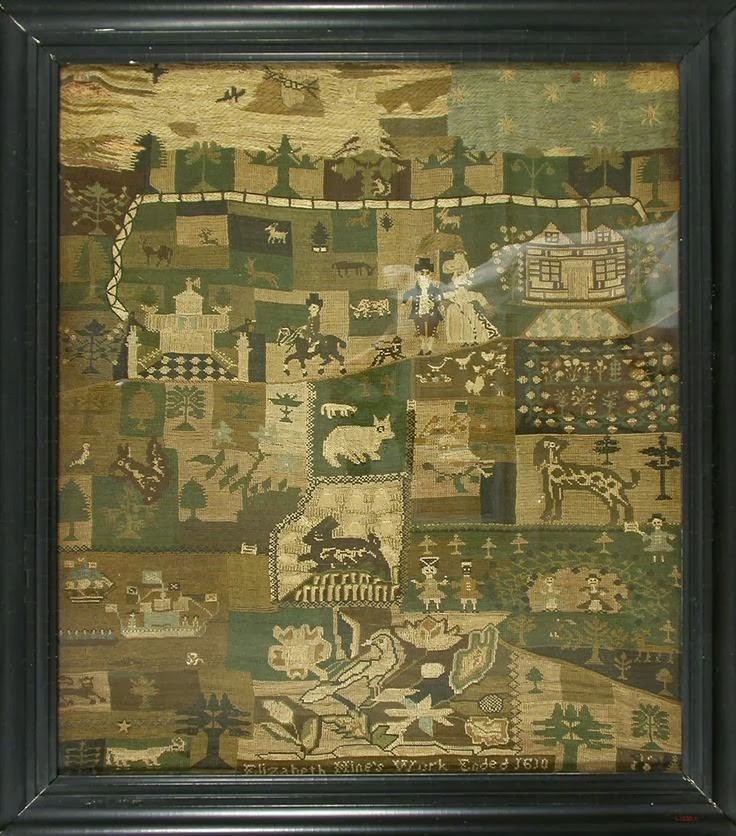 This sampler is in the collection of the Cooper Hewitt
Museum in New York and is English worked in 1610 by Elizabeth Hine and here is the link.  You will notice that underneath the image on the museum site it says -
"please don't steal our images - yeah! "

Now for some reason this makes me very irritable.  What is with these museums?  They sit on vast collections of stuff, it hardly ever sees the light of day, rarely is written about, as they usually don't know much about what they hold and now, through the power of the Internet, they have almost been forced to let us see what they have got!  However, they don't want us to take a copy for ourselves, or pass it around our friends, so they too can enjoy it!

Do you think this is what they mean?  If so, I have stolen their image and let you see this wonderful sampler because it is very wonderful!

Firstly it is extremely early and I haven't seen anything like it before.  It has obviously been influenced by the 17th century Stuart embroideries but is more domestic.  It's form is rather like a crazy quilt and the stitcher has picked out all her favourite motifs and sort of cobbled them together!  I just love it and feel quite inspired!

Do hope I won't get into deep do do for blogging about this!

I found this sampler, also from the Cooper Hewitt Museum which struck me as somewhat similar to the one above - though this time there is no warning about stealing images! 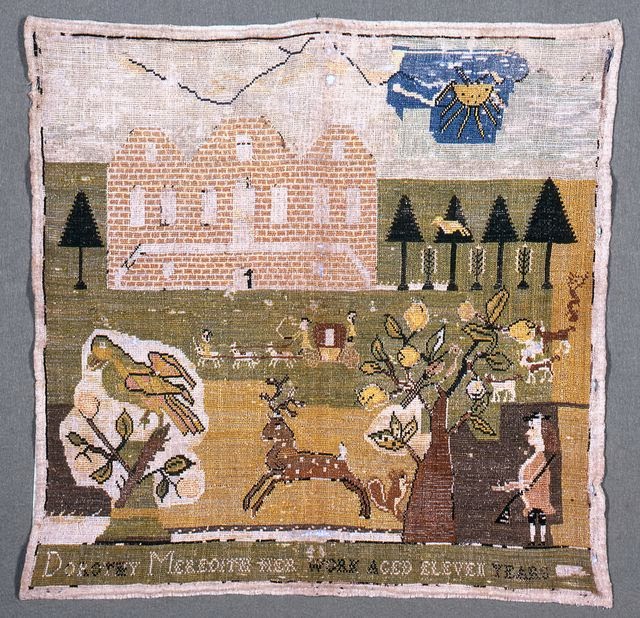 It isn't nearly as complex as the first sampler but it has the same feel and though the date seems to be missing it is said to be late 18th century English!

This brings me to the comments - yes you are right Susan, the costumes do look 18th century.  I was so taken with the look of the sampler that I overlooked that detail, yet it is dated 1610.   However, it does look similar to the one above which is said to be much later!

Regarding museums and stealing images, I wrote about that rather impetuously but on reflection perhaps I should have written to the museum and asked them to define what they actually meant by stealing?  After all what I am actually doing is bringing these images to the attention of a wider audience and providing a link to their website.  I am not using them for commercial gain, which is perhaps what they mean by stealing?  Maybe I will email them and ask and I might even get a reply?

Posted by Little Welsh Quilts and other traditions at 11:01:00

Ho hum. If you hadn't posted the picture, most of us would never have known about the sampler or the museum, much less found a link to the sampler and their website. It isn't like the image is good enough resolution to do much with plus there's a nasty reflection in the glass.

On a slightly different note, despite the 1610 date on the sampler, don't you feel the man and woman figures look somewhat eighteenth century? Just look at his suit. It just doesn't look early 1600s.

There is a very good reason museums have restrictions on image use. The advent of digital cameras and high resolution images has made a market for unsavory people who steal the images, reproduce them on cards or tote bags, etc. and sell them at profit. The museum realizes no gain, yet the people expect the museum to be open, care for and display these lovely things. Admission to a museum does not give you license to take home (even photographically) everything in it. What reason would we have to patronize and support museums if everything in it was "online". It follows then that museums would have no reason to exist.

OH I got cut off!
Bottom line - you are free to disagree with the policy, but you really must honor their wishes. Many museums have images of their collection already online, just not ones that would reproduce well for sale. Besides, a virtual visit doesn't compare to the real thing, and while we will all never have enough time or money to visit all the museums in the world, we can certainly support them from afar by not diminishing their capability to exist.

I have to say, JMC that seeing the photos would rather encourage me to go and see the item for myself. As you say, it doesn't compare with the real thing, I really don't think that anyone considering a visit would then say oh well, I've seen a photo of it, I shan't bother. "

I would think the museum wants to be ask permission to use images. If it is for a blog there may well be no problem with getting permission. For commercial gain there is a problem. Just ask, without justifying your thoughts.

Oh and thanks for showing us these goodies.