I love quilt stories and when I heard this one I was intrigued.  It hasn't a happy ending yet but that may happen.  Here's a short version of the story so far!  Those of you who know about it, please bear with me?

A well known Australian quilt designer Ester Aliu fell in love with a black and white photograph of an English coverlet which appeared in Averil Colby's book "Patchwork". 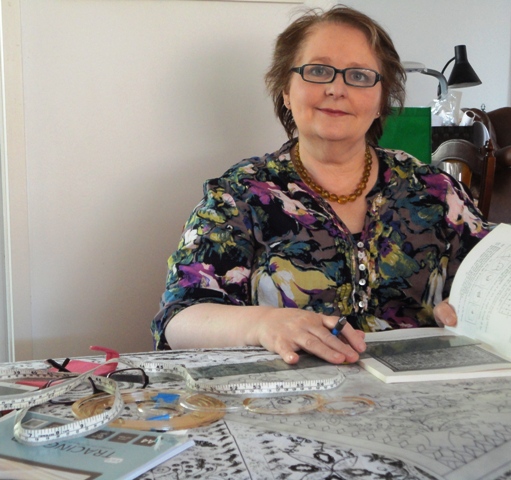 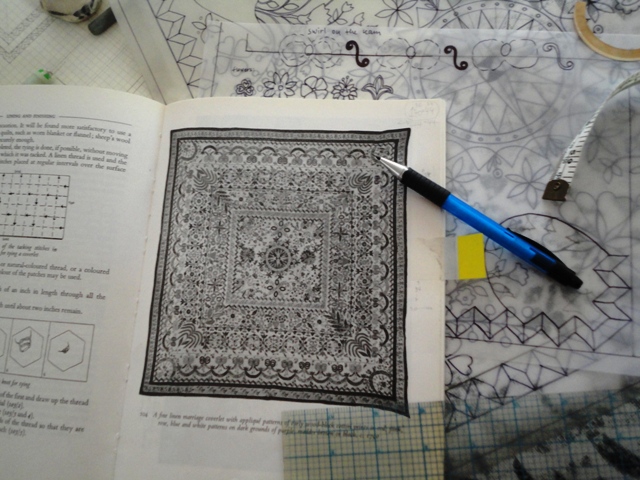 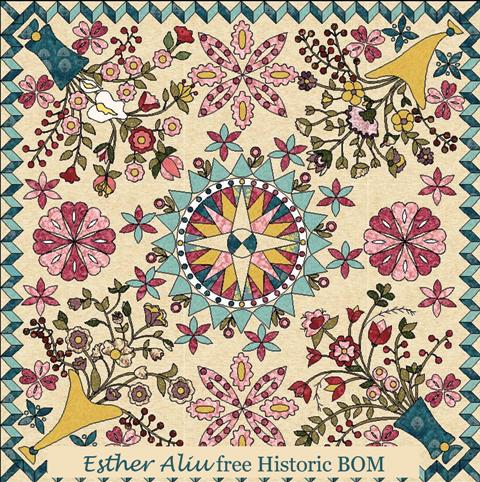 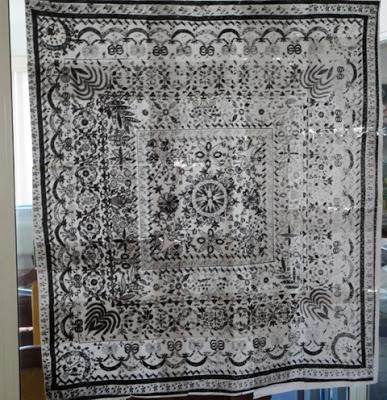 She decided to make a pattern of it based on the very indistinct picture in the book and offer it as a free download on her Yahoo Block of the Month Group.  If you want to follow her progress here is the link to her blog giving all the details.  This is another interesting link giving design details and background information.

I must say, that BOM as it's known, is not a concept I embrace wholeheartedly for various reasons, but it is extremely popular nevertheless! A great many quilters all over the world are making a version of this coverlet. They will all be very different because it is a complete guess what the colours of the original are!  Personally I think this is a good thing because it forces everyone to be more creative in their choices?

I was quite unaware of all this until I had a message from Judi Mendlelssohn of Patchwork and Quilting Magazine asking me if I knew where this quilt was because it hasn't been seen or heard of since the book  was published in 1956.  She was interested in its whereabouts and knew her readers would be too!

A quest for a quilt always fires my imagination and I started on a hunt for it through my contacts and had an interesting day with, I thought, some success. Eventually, however, I found that that others had been there before me and were much more determined and motivated than me, because they were making their own version and wanted to see the original.

Well it looks as if the hunt has been successful!  The coverlet has been traced, but the owner is yet to be convinced to go public!  Read Esther's up-to-date blog asking for those interested to leave messages to persuade the owner to give the quilting world a glimpse of this historic quilt!

I wonder what will happen next?

If you were lucky enough to own an important historic quilt, would you want to keep it low profile or would you be willing to share it with all the hoo ha that would follow?

Posted by Little Welsh Quilts and other traditions at 08:51:00

It's a big decision whether to keep it to yourself or share it with the world isn't it! Maybe one day it will be donated or sold to a textile museum and let's hope that it's being cared for now.

It would be a shame if they couldn't at least agree to some current pictures of the quilt given the large amount of attention focused on it right now. I suppose that could be done anonymously? I'm curious about your viewpoints on BOM's? Is this something you would care to share?

Hi Mary!
If I owned this quilt there is already longer than I would have taken a picture with my digital camera and I would have offered all quilters waiting to see how it looks! What are the colors? Is it quilted? Is chintz?
And if we could know its history?
It should look like the Sundial coverlet!
For me, a quilt is a companion that looks like a rainbow when some of your days are gloomy and warms your body when you're cold! My greatest joy is to see my children become caught in quilts! A quilt is a companion that should show and not leave locked in a cupboard!
Mary, I am a member of the BOM of "Esther, I'm not changing my choice of fabric when I have seen a picture! This quilt that sews in the cottages of the world,
will have the same destiny as the DEAR JANE! It was wonderful to see is 150 quilts "Baby Jane" in the spring to Nantes with Quiltmania!
Mary I love your blog I hope you can help to pleasure each quilter, I think you've read all the comments when Esther asked each to one little word!
Could this be the Prince Charles because he bought at Jen Jones Welsh quilts!!
It's a wonderful story !
Friendship of France
Mamifleur

If I owned this, would probably want to keep it out of the main stream. I would not mind a museum showing it with ensuing pictures as long as my name and location was no way mentioned.

I don't think I will say anymore about BOMs Audrey as I can't imagine participating in one! However, I have had to eat my words before!

I also can't imagine owning such an historic quilt. It would be like having a valuable painting or jewel, too much responsibility. I would donate it either to the Quilt Museum in York or, if it was Welsh, to the Jen Jones Quilt Centre where I know it would be cared for properly.

Of course if I needed the money I might have to sell it, but I wouldn't want it to leave the UK.

Actually I am quite glad I don't have the problem but I would allow a photograph, maybe after all the BOMs have been made?

What a lovely story and I just love these kind of stories surrounding quilts or blocks. I need to know the ending though! I have loved scrolling through your blog - so interesting. I gonna come back with a cup of tea and go through your back-posts big time. xCathy

In the past few years, I've made Dear Jane, Affairs of the Heart, and I'm coming to the end of Little Brown Bird. I am currently collecting the patterns for Love Entwined, but sincerely entreat the owner of the original to let us have a glimpse of the original. By all means keep your anonymity, but please let us see it.