My thoughts on BOMs

After saying that I didn't embrace the concept of BOMs wholeheartedly, I was invited to share my thoughts. First of all I chickened out because it put me on the spot! I don't want to offend anyone because I know that many of you get enormous pleasure in participating in them, so I have tried to analyse my thoughts.

It was probably just my prejudices showing because I can't image making one, mainly because someone else has done many of the most enjoyable bits, designing and working out the patterns.  Designing gives me the greatest buzz, it is the most exciting of all the processes.

The quilts I make now may be inspired by quilts I admire but they aren't reproductions, as my design choices are based on the fabric I have. I always re-design ones based on old quilts and I always scale them down because I don't make large quilts.  I don't need large quilts and they are too unwieldy to deal with and take too long to quilt.

The quilt below, which I am at present quilting, is an example of how I work.  I had these off cuts of  light weight curtaining in my stash for many years waiting for their moment! 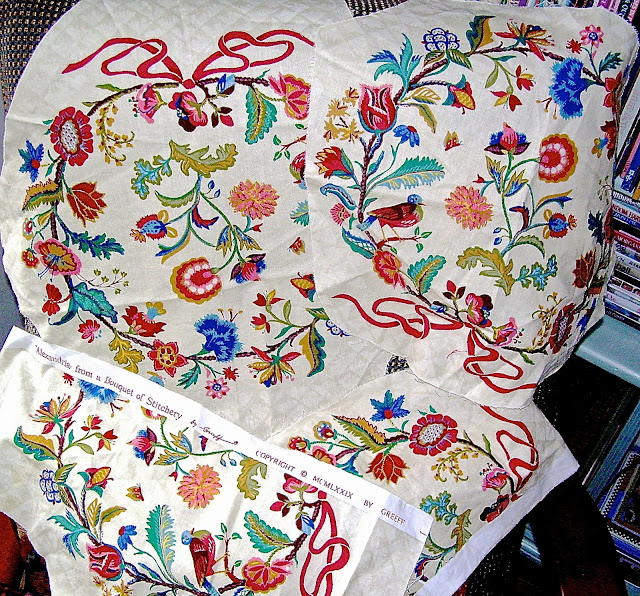 I had always admired the red house quilts in "Quilt Treasurers" as they were typically English and wanted to make one, but how to present the house?  Eventually the penny dropped that this fabric could be cut up  redistributed and applied using herringbone stitch (embroiderie perse) which was the traditional British way to applique at one time and so this design emerged. 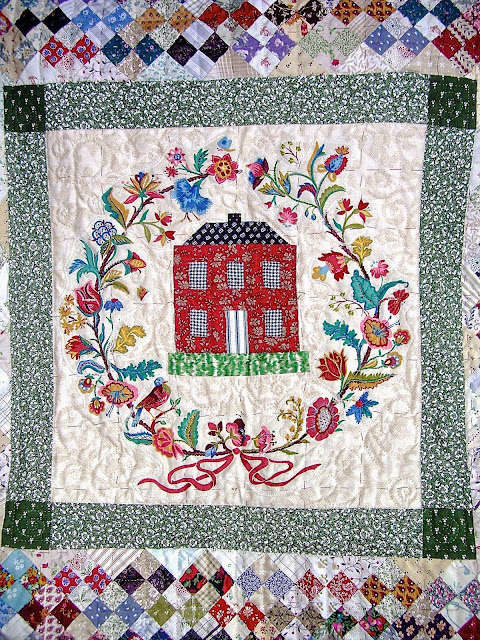 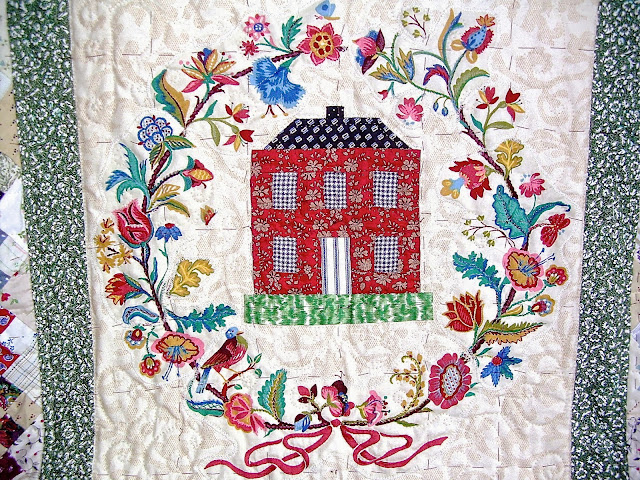 I buy fabric whenever I see something that I like and which I feel I may use.  I never shop for fabric when I start a quilt as it is the fabric that I have that usually inspires the design.  If I have germ of an idea, as with the red house, I first choose a piece of red and then have a rummage in my stash until I have a selection from which to choose, which is when I discovered that the flowery fabric above fitted.  Of course this does mean a great deal of time and frustration is spent auditioning fabrics and it makes the house very untidy, but it often makes me take a risky rather than a safe choice because I don't have the safe choice there, so I have to find something else!

I love designing and drafting the patterns.  It is almost the best part, but not quite, choosing and handling the fabrics is still the best bit.  The cutting out and sewing is enjoyable but routine and not nearly as good as the initial buzz.

The quilting is challenging and can be quite scary which can turn into a slog but again I like to design it to be in tune with the piecing. I never use commercial patterns so every quilt I make is quilted differently.

Of course I realise that others don't feel as I do.  In many years of teaching I rarely had students who drew up their own patterns, they may have got their husband to do it but they didn't  do it themselves.  I was sad about this because I felt that most were capable of doing it but just wouldn't and it wasn't in my brief to force them to do it.

Of course if classes in Patchwork and Quilting were more structured, and I don't mean City and Guilds or degree type courses, drafting patterns and designing quilts would be part of the curriculum, but as the majority of teaching now seems to be in quilt shops, the commercial aspect is the elephant in the room.

Quilt shops have to sell pattern books and fabrics to survive and students use more of both if they are working in that environment. BOMs are part of this world which is straying far away from the "green" aspect of the craft, which is what first attracted me and still appeals to many beginners. This makes me uncomfortable, but that's the way it is, the world of quilting is highly commercial, there is no turning back the clock!

Those of you who are making Love Entwined, I take my hat off to you as it is a very complex. Esther has been very generous working for a long time on the design and publishing as a free download within a timescale.  I wish you all well and am really looking forward to seeing your wonderful quilts.  I do hope that the owner of the original coverlet will eventually agree to a picture of it being released.  Good luck to you all!

Posted by Little Welsh Quilts and other traditions at 09:11:00

First of all, I adore your quilt with the lovely broderie perse! Thank you for a very well thought out post (sorry for putting you on the spot like that!). The main reason I asked is because I almost, ALMOST started Love Entwined and then just couldn't, beautiful as it is. It made me realize that in all my years of quilting I haven't done a single BOM and only a couple kits which I was very satisfied with during and after even though I loved the pattern prior. So.. I think you nailed it for me at least--the exciting part is already done for me in the BOMS and kits.:)Lovely to have a little glimpse into your own personal process too!

Interesting post. I am one of the ones who is working on Love Entwined. I have made a few BOMs in the past but usually work from patterns that I make changes too or my own designs. One thing I would add to the discussion is that there are very different types of BOMs available from those that include all the fabric precut and ready to go, to patterns only. The thing I find that makes LE unique is that there is such a feeling of community with those of us working on the project. Because we have not seen the original we must follow our own voices in fabric selection and even appliqué style. Esther has generously provided the pattern and guidelines and continues to encourage each person to make the quilt her own, I have designed and made many complex appliqué quilts and they have been very rewarding to complete but surprisingly to me, I am finding the LE experience to be just as enjoyable. It is such a treat to see how others are interpreting the pattern as we go and the fact that I am not the only one making it has not lessened the pleasure at all.

Hallo Mary,
Just to say how much I love your little house and how your fabric hoarding and trawling reminds me so much of my process only with paper clippings! Not qualified to enter into the BOM debate - I only have ever made one patchwork cover, hand stitched. It's on my bed but still unfinished after several decades.

Enjoyed your post. Agree with the comment on new quilters not getting some of the "skill" sets due to commercialization. I'd also add computers are part of the issue too...why draft a block when you can search google or a block software and have it print out the directions. Personally I love drafting and picking out the fabric but understand others who want to know that everything will turn out perfect (like a BOM)

A bit late to the party, but wanted to comment on the post. I appreciate very much your description of how you design and plan, sometimes as you go. And especially how you buy and choose fabrics from your inventory. It does make it more interesting to choose the "risky" one because there is nothing safe. Thanks for putting your process into words.