Visting the Land of Counterpane

I had the most wonderful weekend at the British Quilt Study Group held at Gregynog in Mid Wales which I will tell you more about in future posts. 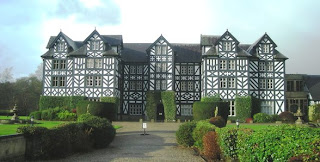 The road climbing out of Newtown to this special place turned and twisted and all around were wonderful views.  I was exclaiming that it was a story book landscape and Sonia, who was  driving, so could only have quick glimpses, said that it was "The Land of Counterpane".  What appropriate place for a meeting of those of us interested in old quilts?

Counterpane is a rather old fashioned English word which isn't used now so I looked it up - maybe we should start using it again?   Counterpane -decorative cover for a bed, bedcover, bed covering, bedspread.

I had also forgotten this children's poem by Robert Louis Stevenson even if Sonia hadn't and I looked it up to share with you.  However, the pleasant land in the poem was more magical in Mid Wales for after all Gregyonog is said to have been the home of Caradoc, one of the Knights of the Round Table.


The Land of Counterpane

When I was sick and lay a-bed,
I had two pillows at my head,
And all my toys beside me lay,
To keep me happy all the day.

And sometimes for an hour or so
I watched my leaden soldiers go,
With different uniforms and drills,
Among the bed-clothes, through the hills;

And sometimes sent my ships in fleets
All up and down among the sheets;
Or brought my trees and houses out,
And planted cities all about.

I was the giant great and still
That sits upon the pillow-hill,
And sees before him, dale and plain,
The pleasant land of counterpane.


Posted by Little Welsh Quilts and other traditions at 09:46:00

Email ThisBlogThis!Share to TwitterShare to FacebookShare to Pinterest
Labels: BQSG at Gregynog

What a beautiful building!! When I was a kid, I had a RLS book of poems, and I remember looking up the work, too.